Vasiliy Degtyarev. Photo of the author.

The public library in Klaipėda, Lithuania hosted the opening of a historically informative exhibit on September 8, 2013, dedicated to the works of Old Believers of Lithuania, a religious fraction that separated from the official Russian Orthodox Church as a protest against church reforms in the 17th century.

The centerpiece of the exhibit was a display of photographs by cinematographer and photographer Vasiliy Degtyarev. Degtyarev, who is also a representative of the Old Believer cultural community of Lithuania, has long wanted to share his creative work with the people of Klaipėda. This initiative did not occur by chance, as Klaipėda is home to about 4000 Old Believers.

The history of the Old Belief has always been a complex one. Fleeing the repression that appeared as a result of the Church schism brought about by Patriarch Nikon in 1666, many of the followers of the old orthodoxy left Russia and continue liturgical practices that the Russian Orthodox Church maintained before the implementation of these reforms. By the late 17th century, the first Old Believers had appeared in Lithuania.

The antiquated Russian traditions of this unusual community still provoke great interest, even among Lithuanians themselves, who were unable to hide their fascination at the wonderful works of the organizer of the exhibit.

Exhibit. Photo of the author

Vasiliy Degtyarev himself agreed to reveal the essence of Old Belief away from the photographic lens, and shared his thoughts in a short interview:

— Vasiliy Martynovich, tell me, what cultural value does Old Belief hold for the Russian people? Would you say that these values embody the spiritual core of the Russian national consciousness ?

— The author Platonov gave an interesting response to this question. He said that Old Belief is more diverse than we have been in the habiting of thinking. It held and continues to hold much that is beneficial for the soul. After all, all of the cultural values that Old Belief advances come from Father Christ himself. And if Christ himself has not changed in all these years—and change he could not—then how could the cultural values of Old Belief, which carry within them the teachings of the Heavenly Fathers and God himself, change? Now more than ever, a crisis, not only of the soul, but also of the consciousness, is taking place. We are witnessing a kind of Homo Misguided: he does so much, has a good time so much that he has lost such concepts as “secrecy”, “holiness” and “life.” We need people like Dante, Virgil, who will guide this straying European and even American society out of this dead end. With regard to the second part of the question, it would be best to start with the fact that Old Belief itself is very diverse. Several sects have survived: the Pomorians, Fedoseevtsy, Belokrinichniki, Chasoveniye, and others. As an artist, I get along with everyone, but the Pomorian understanding is closest to my own. Let’s examine the circumstances—I take photographs of Russians who pray in Orthodox, as well as Old Believer temples. In both cases—Russians, but between them there is a big difference: genetics, construction of the skull. We have many with blue eyes, which indicate a typical Russian genotype.

— How do you assess the current spiritual status of the Old Believers? Is any rise or decline in the community evident ?

— We are living through a period in which, on the one hand, the prince of darkness is trying to destroy the last islands of piety. For instance, everyone knows of the lake Svetloyar, where God is hiding the islands of holiness from this corrupt world. On the 6th of July of this year, I was lucky enough to visit that region for a holiday service. About 15,000 pilgrims gathered, and in the evening the procession around the lake started. People would stop at designated islands to read prayers. In our time, when all moral values have been destroyed and the soul is completely deformed, these islands remained. They exist everywhere: in America, Europe, Asia. In Russia itself there are relatively small corners, hidden from civilization, where not even passports are wanted, with their modern chips. Everywhere we find signs of the Antichrist and the question is: what to do? Is it worth it to accept these passports and other innovations? By the teachings of Old Belief, and more specifically by the teachings of Isaac Sirin, the Antichrist is an invisible, spiritual entity that rules over the world through his assistants. But we will survive this phase, though now it may be difficult. One need only remember the words of that very Chizhevsky, “how good, that it was difficult!”, or “how good, that there was prison!” etc. We will survive; it is true, but at what cost? It is unclear.

— What is being done now to preserve the Old Believer community and its old-Russian culture? And what, in your opinion, needs to be done, to preserve the inheritance of our ancestors?

— “By your faith you will receive,” said Christ. We see miracles—when in the times of the cruelest repressions, the Church was suddenly restored. God told us to survive all our strife, and so we did. Recall the Second World War: so much aid was derived from icons, from prayers. It is equally worth distinguishing several figures of the Orthodox Church—those like Nikola Guryanov, who suddenly decided to carry out a religious procession on a plane around the borders of Russia. And given this, it doesn’t matter what sect you pertain to—Old Believer, Orthodox, or Catholic, there are so many of these bringers of light, and on them all hope lies. There are many examples, and any Orthodox, Catholic, Old Believer, or even Muslim can be one. The Antichrist does not choose based on religious confession—he absorbs everyone and everything. This is an animal that doesn’t possess love, and where there is no love, anti-love appears.

— How is the current relationship between the Old Believers and the Russian Orthodox Church?

—In the '30s, the cruelest repressions were being carried out against all, including the Orthodox believers as well as the Old Believers. An enormous amount of priests, monks and simple believers were exiled. Here it is worthwhile to remember St. Seraphim Solovetskov, who being in exile, continued to give sermons. He was feared and respected by all of those soldiers, who were, in truth, simple youths, forced to work for the regime. He redeemed many prisoners; today they were killing, but tomorrow even they were being killed. If we consider our own time, our shared concern is: will faith continue? “Will I find faith on Earth, when I again return?”—said God. And he doesn’t care about the length of your beard or hair—he looks at the heart and at how you acted and continue to act. Now is not the time to create discord between Orthodoxy and Old Belief. Each individual must be in his own place and do that which he must do.

—It is known, that in pre-Revolution Russia, Old Believer capital and agricultural activity formed the economic foundation upon which the Empire rested. This was especially true during the Stolypin period, when such family clans as the enterprising Morozovs, and the banker Ryabushinskis were known to all. Have enterprising movements like these, founded on strict Old Believer traditions, continued in our time?

— They appear from time to time. Not too quickly, but this is happening. In our time, capital lies in the hands of the atheists. Our dark enemy has even thought of this. But changes are occurring. Here's a simple example from Lithuania. There is one businesswoman and Old Believer by the name of Lidia Lyubene. She created a successful business, the income from which amounts to millions. Once, she saw a program on the television in which they spoke about a fire in the church of the Kaunas Old Believer community. Lidia immediately contacted representatives of the church and forwarded a million litas for its restoration. Such are the people that stand with us. They exist in Russia as well—they simply don’t manifest themselves in a way that is visible to the public. Another example—Shalgunov Anatoli, president of the Vilnus Automobile Enterprise. He helps not only Old Believers, but also takes part in all kinds of charitable acts for children and orphans. We shouldn’t say “I am an Old Believer and assist only Old Believers.” Help everyone—there are so many poor people all over Russia. God showed us the relationship. Do not look to nationality or religious views. If the opportunity presents itself—help.

— And in conclusion, why are we observing a decline in faith in the world? Familial and national values have lost their importance. What future awaits us?

— Such is the current phase, but we will survive it. “By your faith, you shall receive” – said Christ. Today the Christian faith finds itself attacked on all sides by dark forces: false priests, false Christs. There are so many different sects that invoke the name of Christ, but in reality bring nothing but evil. Mormons and such, who pull people into their spider webs. The rest we can see for ourselves: some are seeking salvation in their basements; others are building something or other. And for what? Live, as God commanded, in a normal house, pray, do good, follow the Ten Commandments, repent if you have sinned. It was, is, and will be thus. Do not wait for an ideal society, and don’t try to create one. It is precisely because of the impossibility of its attainment that we call it ideal.

Exhibit. Photo of the author.

Exhibit. Photo of the author.

The interview and photographs were prepared by the human rights activist German Pantserov. 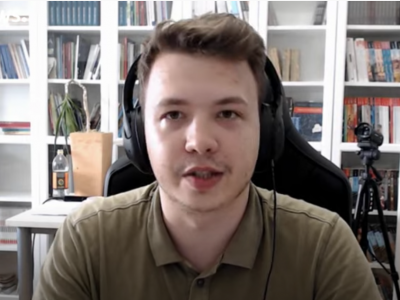