Tintin, Spirou & Corto Maltese are exceptions, with stories set in the USSR 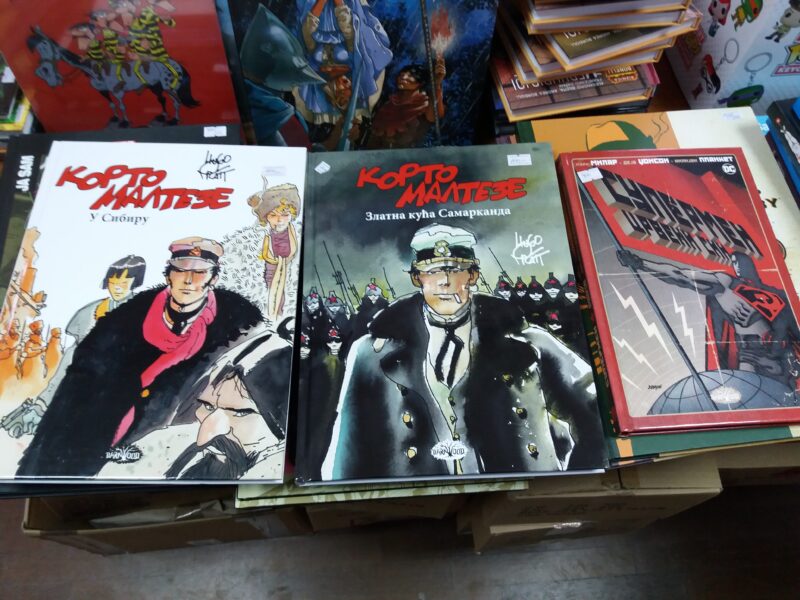 Very few mainstream comics have been set in the Soviet Union. Exceptions include ‘Corto Maltese in Siberia,’ ‘The Golden House of Samarkand,’ and ‘Superman: The Red Son.’ Photo by Filip Stojanovski (CC-BY 2.0) depicts recent editions of the three comics, published in Serbia.

The Soviet Union existed for 70 years, from 1922 to 1991, and at its height encompassed 15 states stretching from the Baltic to the Black Sea to the Bering Strait. Despite its importance in world affairs for much of the 20th century, there’s one area of international culture in which the USSR barely existed: the world of comics.

The USSR didn't have its own comics industry, so it couldn't produce stories about itself. And though a few of its allies had some comics being published while being part of the Soviet-led Eastern Bloc, with the possible exception of occasional World War II stories, even they didn't have any major series set in the USSR.

Between 1947 and 1991, during the Cold War, mainstream American comics didn't offer much opportunity for their audiences to get acquainted with the Soviet people and their lands, beyond the “us vs them” clichés.

While US superhero comics had many stories involving Soviet characters, such as Marvel's Black Widow (Natasha Romanoff), very few were set in the USSR. And when they were, similarly to James Bond films, they didn't really touch upon the life there outside limited settings, such as military installations, Moscow's Red Square and the Kremlin, or KGB offices.

Tintin in the land of the Soviets

The first instance of a major comics series with a story set in the Soviet Union came several years after its formation. The adventures of the acclaimed Franco-Belgian reporter Tintin began with the 1929 story “Tintin in the Land of the Soviets.” 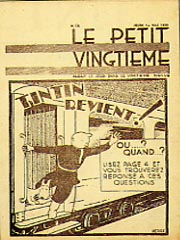 The front page of the 1 May 1930 edition of Le Petit Vingtième, declaring “Tintin Revient!” (“Tintin Returns!”) from his adventure in the Soviet Union. Photo: Wikipedia (fair use).

Rather than reporting, there Tintin acts more like a secret agent, fighting “evil communists,” who are presented as a gang of bloodthirsty robbers who exploit the helpless, subdued population, stealing their food and killing at will. They are also seen as incompetents incapable of capturing the hero, who returns triumphantly home to Brussels to a hero's welcome by cheering crowds.

As the basis for his first Tintin story, the author Hergé perused much of the content of a 1928 anti-Bolshevik pamphlet “Moscou sans voiles” (Moscow Unveiled) by former Belgian diplomat Joseph Douillet.

This story also seems to have set the standard of depicting “Soviet Russia” as a drab and dreary wintery wasteland, with the freezing cold as a recurring motif.

Though the first run was commercially successful, the author considered this work substandard and crude, and for decades refused requests for reprints. Hergé only agreed to republication in 1973 in reaction to expensive “mediocre-quality” unlicensed editions that exploited the growing fan base. In the following decades, the previously shunned episode had been “normalized” as part of collections and was republished in Belgium and abroad through translations.

Comics aficionados mostly consider this episode as a reference in discussions contrasting Hergé's later works. A comment about the 2011 Croatian edition on Stripovi.com, a forum/encyclopedia for comics publishing across the region of former Yugoslavia, sums up the general impression of the fan community:

Chauvinistic, imperialistic, racist, adventurous. This comics is only interesting because it shows Tintin's starting point, and not much more than that.

Spirou & Fantasio: Before and after 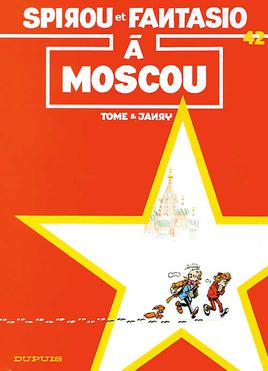 Franco-Belgian comics duo Spirou & Fantasio had two adventures in the USSR. The first was released in 1990 as the album “Spirou à Moscou” (Spirou in Moscow). It has a light tone, caricaturing many of the Western stereotypes about the Soviets, such as playing suicidal Russian roulette and men greeting each other by kissing on the mouth.

Unlike their preceding compatriot Tintin, this pair of hero reporters help the authorities fight the infiltration of the mafia, run by Fantasio's evil cousin Zantafio, who uses a Slavicized acronym Tanaziof as a moniker.

Their second coming to the Soviet Union was published in 2020, about three decades after its demise.

“Spirou chez les Soviets” (Spirou among the Soviets) can be viewed as a clever parody of Tintin's adventure and the duo's first trip to Moscow, expanded with “visits” to a Siberian gulag, Baikonur Cosmodrome and a wild train ride. While set in the late 1950s, this story also deals with the issue of the unsustainability of Stalinist state socialism, as well as the depressing effects of combined commercialism and poverty which characterized the social demise during the 1990s.

One notable exception from the industry “norm” is the cult classic Corto Maltese, made by legendry Italian comic book creator Hugo Pratt (1927-1995). The main character is a romantic and amoral globetrotting wanderer, often accompanied by characters based on historical figures.

For instance, the episode Corto Maltese in Siberia, published in 1974, involves the immoral Russian adventurer Rasputin, а recurring character based on the self-proclaimed holy man and imperial advisor Grigori Rasputin (1869-1916). In Pratt's fictional universe, Rasputin first appears as a pirate sailor in a story set in 1913, while the episode set in Siberia takes place in 1918 during the Russian Civil War.

The Golden House of Samarkand, published in 1967, is another graphic novel that takes Corto Maltese to Soviet territory. He visits Turkey, Iran and several Central Asian countries, including then-Soviet Uzbekistan and Tajikistan during a treasure hunt set in 1922. 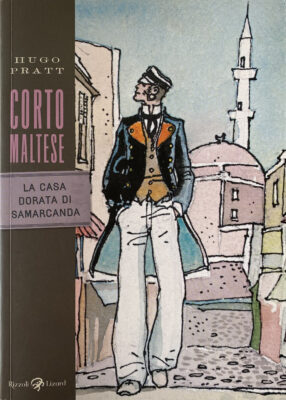 The Italian cover of The Golden House of Samarkand. Photo by Paolo Sorbello, used with permission.

At one point in this story, local Soviet authorities detain Corto and are supposed to execute him, but he “pulls out strings” and phones a friend who intervenes on his behalf. The friend is Joseph Jughashvili, later known as Joseph Stalin, whom Maltese met while the future dictator worked as a “shy night porter” in Ancona, Italy, in 1907.

In the episode, Corto endearingly calls Stalin ‘Bepi’ and complains about the spotty phone connection, while a Soviet officer listening in remarks how the frontier war zones that he plans to visit have even worse infrastructure. Having to go through Central Asia during the struggle for power between Imperial Russia, Pan-Turkic movements, and the Soviet army is a dangerous adventure for Corto. Pratt's narrative revolves around the weak allegiances that the armies in the peripheries of the empires had for the great powers. Defecting soldiers, retreats, and corruption at border crossings are commonplace in this adventure of the sailor.

According to Vladimir Bitoljanu, comics book publisher and co-founder of Bunker comics bookstore in Skopje, North Macedonia, the way the Soviet Union is depicted in Hugo Pratt's graphic novels doesn't differ from romantic depictions of dozens of other locations around the world. In a statement to Global Voices he explained:

“Unlike some other comics authors from his time, Pratt doesn't resort to stereotypes that depict the Soviets as particularly negative. Of course his stories are full of local heroes and villains against the backdrop of the wars and other conflicts, but his style is realistic in presenting both positive and negative sides of human character in an unpretentious manner and without political bias.”

Comics fans of the world, unite!

One superhero graphic novel set in the Soviet Union bears an honorable mention here even though it was made 13 years after its dissolution. The critically acclaimed DC miniseries Superman the Red Son (2003) depicts an alternative “what if” origin story: in 1953 the baby Superman doesn't land in a quaint U.S. Midwest cornfield but in the fertile wheat-covered plains of Soviet Ukraine. Consequently, Superman becomes a Soviet patriot, using his powers to further a dystopian state based on Stalinism.

Comics stories set outside of the familiar locations can either feed on existing mainstream biases and animosities or enrich the understanding of media consumers about faraway lands and cultures. The comics industry is under existential pressure due to the decline of print worldwide, and one way to adapt to the new age is to offer engaging stories reflecting the globalization and cross-fertilization between communities.