Travels in the Kurdish Blogosphere

This week marked the beginning of a trial for Saddam Hussein, not only is this trial an unprecedted event, but the question that lingers is that can he really be tried for all of the atrocities that he is credited for. Another interesting aspect of the trial is that the primary judge in the case is a Kurd, which is a sweet victory for the Kurdish peoples. Hiwa from Hiwa Hopes gives a moving post about why it is important that this trial is happening, and gives us some details of memories he carries from being supressed by Saddam in his youth.
Of course, when there is any speculation on what Saddam is or isn't responsible for, the issue of Iran being “next on the list” or wheter or not Iran was responsible for items attributed to Saddam comes back to the surface. On the Kurdistan Bloggers Union there is an interesting discussion as to the issue of who is responsible for the gassing of Kurds at Halapja, some critics site Iran as the perpetraitor of the deed, while it is the Iraqi regime that is traditionally held responsible. Vladimir from From Holland to Kurdistan muses as to wheter or not Iran might hold the same fate as Iraq and have its regime dismantled as well. Speaking of Iran, there has also been a revisiting of the history of Iranian oppression of the Kurds, the blog Land of the Sun: Kurdistan gives an excellent overview of Iran's actions towards the Kurds of Eastern Kurdistan.

Recently there has been an upsurge in violence in the previous peaceful areas of Northern Iraq/Southern Kurdistan which has been causing some concern for the Kurds in that region. Especially as there are rumors that the violence is stemming from and sanctioned by the Sunnis of Iraq.

Other issues currently facing the Kurds of Iraq are the political aspects of a new country. The new Iraqi Constitution was recently passed, however that does not mean that Iraq's stability is ensured. Kurdish critics have begun to argue that perhaps too many Kurdish consessions were made in forming the new Constitution, others have agreed with US President George Bush that the Kurdish political parties need to unite to be effective.
Perhaps the best reaction to the Kurdish involvement is the following picture posted from the blog Koerdistan: 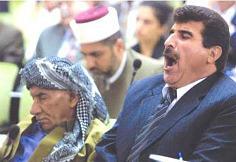 Although the results of the constitution vote came out only yesterday, the Kurdish blogs have yet to fully comment on its impact, but I expect that more will come out in the week to come.

Iraq and Iran have not been the only countries that the Kurds are discussing this week. Turkey has also been looked at for not only its formal opening of talks with the EU but also its citizens support of honor killings. Plus, this week there was also news about Reporters without Borders report on Turkey's lack of freedom of the press.