'We worship dogs in the morning and frighten them at night'

It is that time of the year again when we Nepalis worship various members of the animal kingdom. Cows and crows, bulls and dogs — all have a day this week dedicated to them. On the day of Kukur Tihar (this year, October 24), people worship dogs to please Yama, the god of death. They are adorned with tilaka on the head and they wear flower garlands around their necks.

Image by Sonia Awale via Nepali Times, used with permission.

So it is ironic that the very evening they are worshipped, we scare the bejesus out of dogs with firecrackers. Our furry friends are traumatised, some travelling great distances to escape the noise. There have been stories of dogs that never make it back to their homes.

“We have a really wrong practice going on here, we worship dogs in the morning and frighten them at night,” says animal rights activist Sneha Shrestha who works with animal welfare organisation Sneha’s Care, which shelters homeless and abandoned animals from the streets of Kathmandu.

Shrestha has 170 rescue dogs in her shelter and says that every time there is a loud wedding party in the neighbourhood, they are terrified. 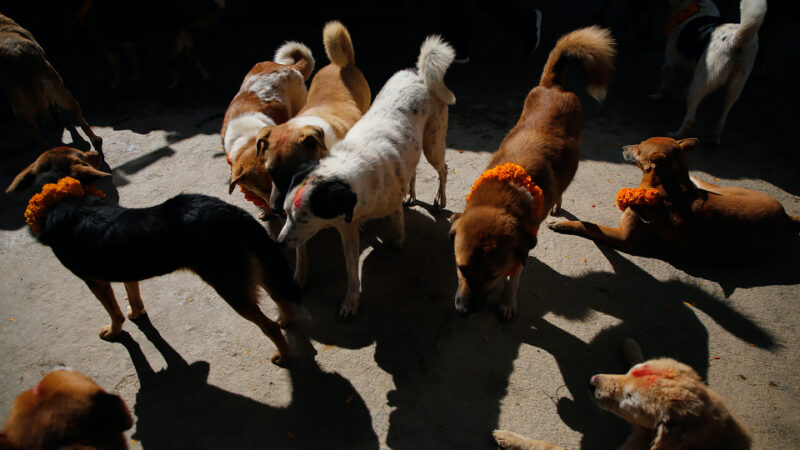 “Tihar is the worst because of the explosions of firecrackers; sometimes dogs which are out in the open without protection get heart attacks,” Shrestha adds.

Kukur Tihar is one of the most unusual festivals in the world, and international documentaries have been made on the Nepali reverence for dogs. It inspired “Kukur Tihar Mexico” the same week as in Nepal. The least we can do, therefore, is to be kind to the dogs we venerate.

The good news is that more Nepali families are now inclined towards keeping dogs and letting their children grow up with pets, instilling in them virtues of kindness and compassion towards all living beings from a young age.

However, the way Nepalis treat strays and community dogs can be very different from pets at home. Dogs on the streets do not necessarily belong to individuals but are part of the communities that they guard in return for food and (sometimes) lodgings.

But there have been horrific incidences of animal cruelty towards community dogs, including poisoning by city authorities in the name of culling populations or preventing the spread of rabies. Animal welfare groups estimate that there are over 100,000 dogs that live on the streets of Kathmandu Valley alone. 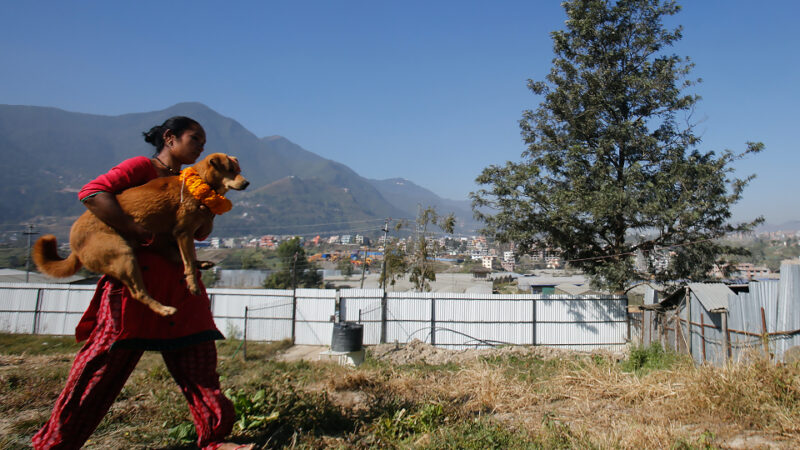 Families are now increasingly buying pups from kennels as status symbols, and an informal survey showed that Huskies have overtaken Golden Labs and German Shepherds as best sellers. However, there are still very few who adopt rescued street dogs from shelters.

“Getting a dog is still very much tied with our vanity. If we are really looking to love them, the breed should not matter,” says Shrestha. “In fact, if we Nepalis claim to be proud of our heritage and ancestry, we should be adopting more of our local breeds, they are not inferior to pure breeds in any way.”

Indeed, animal rights groups are promoting better treatment and welfare of strays and community dogs as well as providing them with loving families with the slogan, “Adopt, don’t shop.” 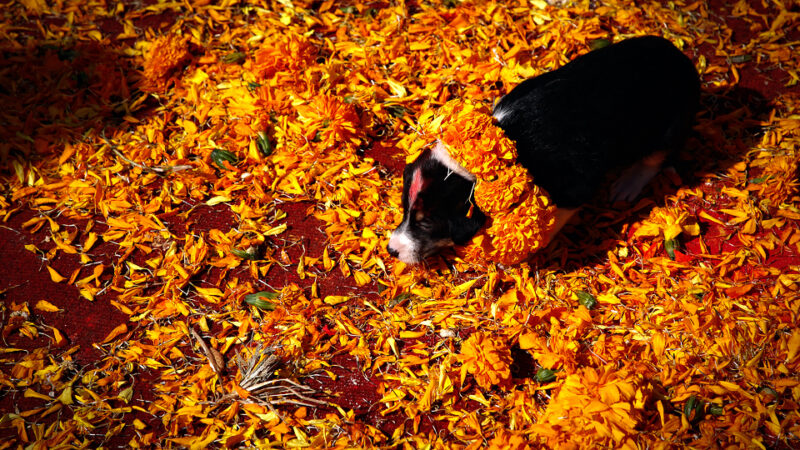 Animal shelters and welfare organisations as well as individual young rescuers have been crucial in spreading the message, primarily through social media. Influencers and celebrities with hundreds of thousands of followers could do more by adopting strays and setting a good example.

The Nepali street dog is now recognised as a breed of its own and its DNA has been traced to the first domesticated dog. A 2015 genetic study published in the journal Proceedings of the National Academy of Sciences said there was strong evidence to show dogs were first domesticated in modern-day Nepal, Tibet, and Mongolia at least 15,000 years ago. They evolved from Eurasian grey wolves and moved with pre-historic human migration across Asia.

Local Nepali mixed breeds are exceptionally loyal and, because they are less prone to congenital diseases, are usually healthier and have longer lifespans than inbred pure breeds. They are street-smart, obedient, and respond to rewards. Not surprisingly, therefore, there is an increasing demand for Nepali street dogs to be adopted abroad. 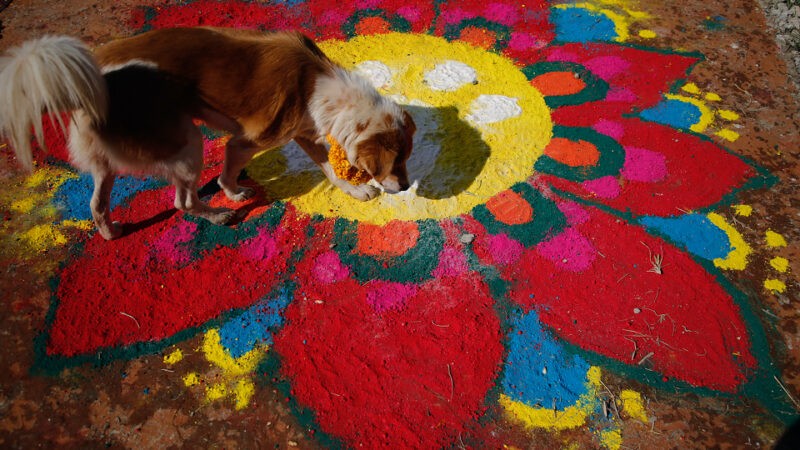 Mapstone has been to Nepal nine times since 2017 and spends nearly half a year in the country helping to promote the adoption of several Nepali stray dogs, primarily to Canada. At the moment, however, there is a temporary ban on their transport due to irregular vaccination status.

Here is an interview of Srijana Thakuri of Sree Rescue Animal Nepal who says that “it takes a long time and effort to save dogs, but people don't hesitate to kill them.”

Vaccination of dogs against rabies has long been neglected by municipalities and local governments. Animal welfare organisations like Sneha’s Care, KAT Centre, and Street Dog Care are now helping municipalities like Lalitpur to spay and manage community dogs.

Rabies is a problem, but instead of vaccinating canines, towns across Nepal often resort to exterminating dogs when there is an outbreak.

“We are always ready to lend our technical expertise to the government, but they are least bothered,” reports Sneha Shrestha, recalling one time when she asked officials for 10,000 doses of rabies vaccines for the dogs, only to be given 500.

Nepal needs to increase the domestic manufacture of anti-rabies vaccines if it is to meet the WHO target of eliminating rabies by 2030. But, says Shreshta, “At the current rate, it is looking impossible.” 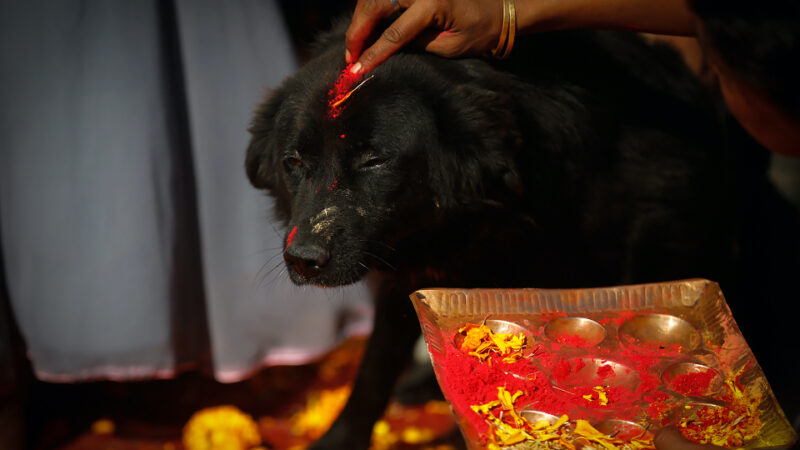 Perhaps it is not surprising that a government that neglects the public health concerns of its human citizens would also treat animals so poorly. But the compassion a nation shows its animal population is often an indicator of how it treats its people.

Lesley Mapstone says: “For me, the most favourite part of Nepal is street dogs, aside from human Nepalis. My humble request to everyone: if you are really looking to get a dog, to love and protect them for life, adopt a local dog. And be kind to them.”

She could have added: Be kind to them every day, not just on Kukur Tihar.