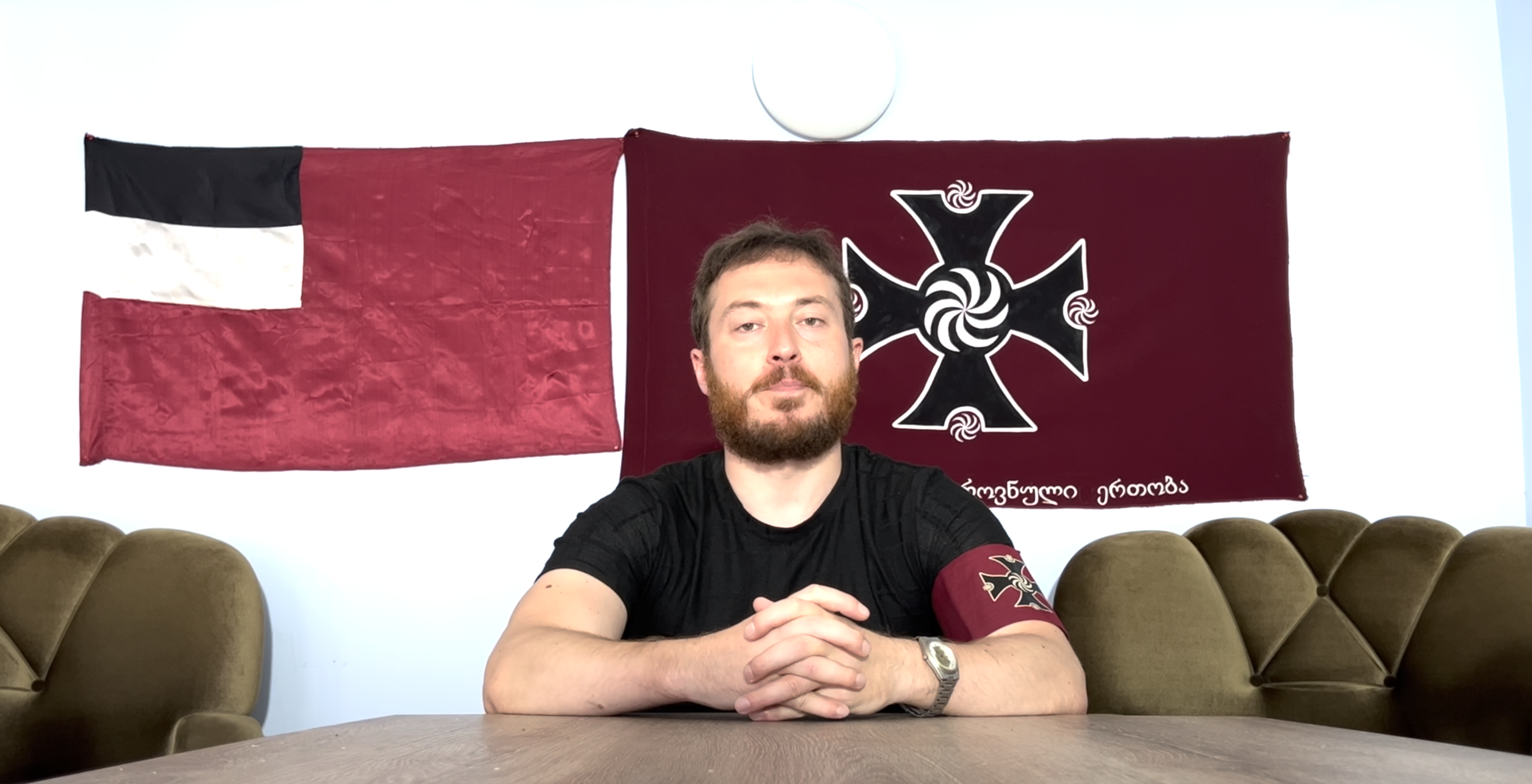 Screenshot from a video published on the movement's YouTube channel on September 12, 2022.

This article was first published on OC Media. An edited version is republished here under a content partnership agreement. Content notice: This article contains references to racism, anti-Semitism, and white supremacy that some viewers may find disturbing.

A prominent Georgian neo-Nazi group, Georgian National Unity, has reemerged online months after their self-described “commander,” Giga Chelidze, was released from prison. Chelidze served three-and-a-half years in prison for the illegal purchase, storage, and carrying of firearms. He was arrested in September 2018, following public outcry over videos his group published online of National Unity members being trained to shoot in a forest.

Banned from Facebook and bereft of their leader after 2018, Georgian National Unity resorted to YouTube and Telegram to recruit members and issue anti-semitic and racist statements. In recent months, the National Unity leader has been able to do that twice a week through his YouTube show “Fascist Talks.” In his show, Chelidze has called Marxism and liberalism “viruses of the international Jewry,” whom he accused of starting the war in Ukraine.

Chelidze has also alleged that ‘”globalist” and “Masonic” powers seek to populate Georgia with “foreign scum […] so that Georgian women marry them, and black bastards run around here and the Georgian nation goes extinct.” In the past, Chelidze also said he was a “fascist even in his sleep.”

The National Unity leader is known to engage in debates with listeners of YouTube Q&A sessions about how “race mixing is wrong.” “Yes, I am a racist. I love my race,” he claimed.

Though the videos violate YouTube's stated commitment to fight online hate speech, the platform has taken no action thus far to remove the neo-Nazi group's channel.  With slightly over 500 subscribers, the channel joined the platform in February 2022 and has shared some 90 videos since then. The most popular video has received more than 5,000 views.

Google, YouTube’s parent company, has yet to respond to Georgian news outlets’ request for comment on the Georgian National Unity’s activities on their platform.

Openly neo-Nazi from the start

Georgian National Unity was founded in 2016 and rose to prominence in 2018 when its members openly displayed firearms in their videos and held rallies. It is part of a far-right movement in Georgia endorsed by the Georgian Orthodox Church, according to a Freedom House report. “While the church does not explicitly endorse such activities, its actions and those of its clergy have provided ample unofficial support, particularly for far-right groups’ efforts to persecute the LGBT+ community,” said the report.

Chelidze claimed soon after that their members had weapons, including hunting rifles, Winchester rifles, pistols, and semi-automatic weapons.

At that time, investigative agencies claimed they only found stun guns in his possession.

In May 2018, National Unity announced the creation of the “Popular Guard” or “blackshirt detachments” to be deployed against anti-government protests led by liberal groups in Tbilisi, and marked Family Purity Day with Nazi salutes in central Tbilisi.

According to reporting by Eurasianet:

Georgian National Unity borrows its insignia from a World War II battalion of Georgian émigrés and prisoners of war who fought with the Nazis against the Soviets, and it is officially registered as a non-profit group. The group even has its own militia, appearing to number two dozen young men and women at most, who call themselves “blackshirts” in an allusion to Benito Mussolini’s shock troops.

Family Purity Day is a holiday created by the Georgian Orthodox Church in 2014. It coincides with the International Day Against Homophobia on 17 May.

Chelidze was briefly detained in October 2017 outside the Georgian Football Federation’s offices as members of his group, and other far-right groups, protested against Georgian footballer Guram Kashia. Kashia became a target of extreme right-wing groups after he wore a rainbow armband at a football game as a show of support for queer rights.

Initially, the group was mostly involved in translating fascist literature into Georgian. Their first public campaign was an online petition demanding a ban on George Soros’s Open Society Georgia Foundation — a part of the Open Society Foundations, which offers support to civil society groups.

However, unlike other extreme right groups in Georgia, Georgian National Unity has always openly positioned itself as fascist and used neo-Nazi symbols and gestures.

In April 2017, they welcomed Hungarian Prime Minister Viktor Orbán in Tbilisi and lauded him for his fight against Soros and liberalism. As news of Orbán’s visit spread, Central European University (based in Budapest until 2019) alumni and supporters created a Facebook event for the protest, while local conservative, far-right, ultra-nationalist, and neo-Nazi groups organized their own, counter event.