Thirty-two years later, do we have a clear picture? 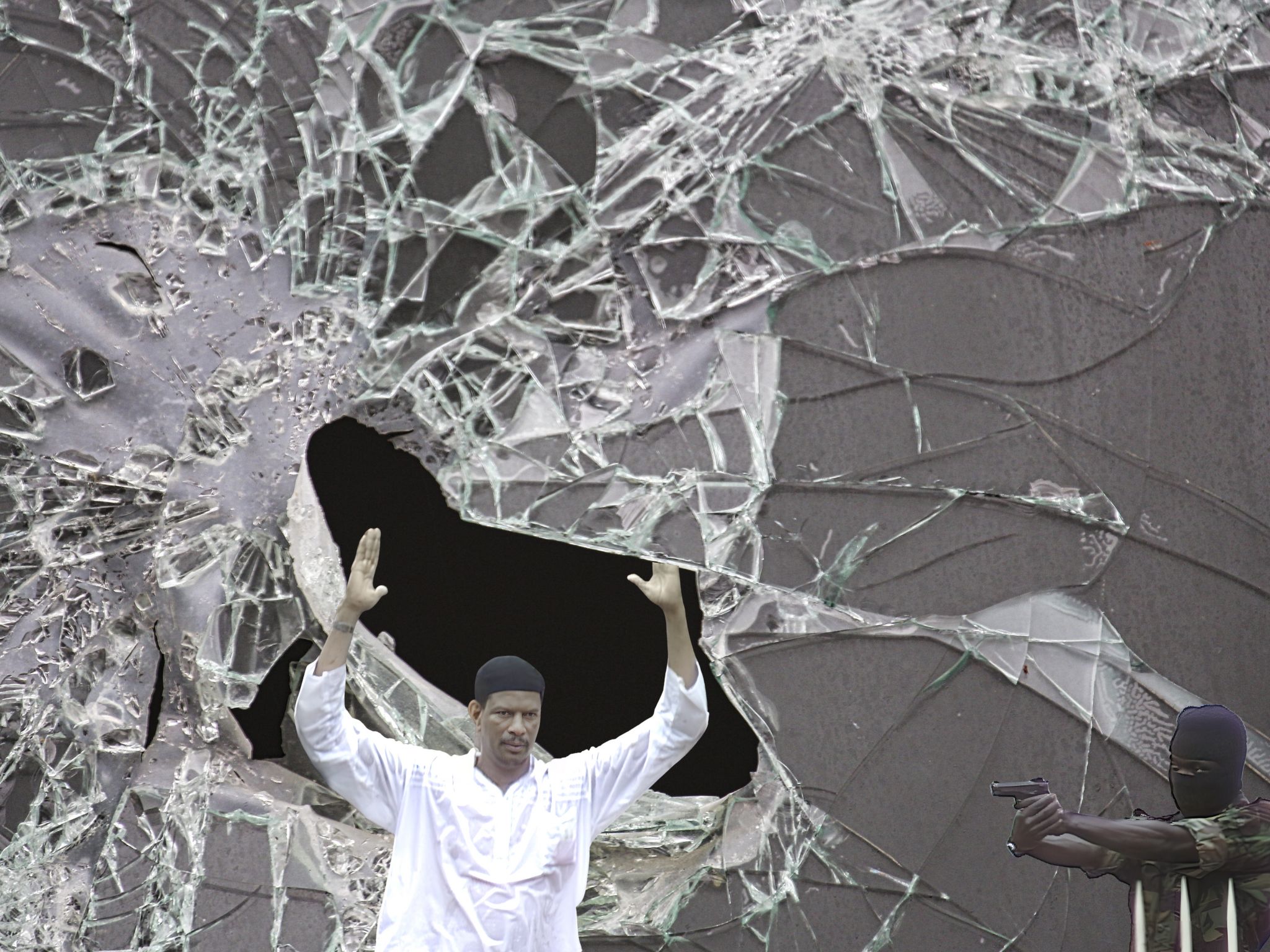 Image of Yasin Abu Bakr surrendering to Trinidad and Tobago regiment forces in 1990, compiled using Canva elements and screenshots from footage filmed by Walt Lovelace and used with permission.

Every Trinbagonian has a coup story. During the “summer holidays” of 1990, I interned at Trinidad and Tobago Television (TTT), the state-owned — and only — television broadcaster in the country at the time. I walked into the station on Friday, July 27 like it was a normal day. Looking back on it 32 years later, I cannot point to anything tangible that suggested things would careen so wildly off course.

Well, that's not entirely true. Coups d'état tend to happen as a result of a slow burn. You don't just wake up one morning and decide to forcibly take over a country; it requires planning. Could the 1985 police killing of Abdul Kareem, a member of the Jamaat al Muslimeen, the radical Islamist group led by Yasin Abu Bakr, have been a factor?

There were sociopolitical challenges as well. The National Alliance for Reconstruction (NAR) had won the 1986 general elections by a landslide and become the first successful challenger to the People's National Movement (PNM), which had governed the country since its independence from Britain in 1962. Oil prices were down after the boom of the mid 1970s to '80s, and Prime Minister ANR Robinson had introduced belt-tightening measures that were met with great outcry from the labour movement, the business sector, the opposition and the general public. Times were undoubtedly tough, but was austerity justification for treason? At any rate, as a young television arts student, I was primarily focused on my gig at TTT.

My shift was over by early afternoon. On my way out, someone asked if I would mind picking up a box of U-matic tapes and dropping it back to the station in time for that night's newscast. I conscripted a friend to drive me; a few hours later, as we headed back into Port of Spain along South Quay, the road running parallel to the coast at the southern end of the capital, we noticed dark smoke billowing from the centre of downtown.

Against my advice, my friend turned off and headed into the heart of the city. There was no radio in the car, so we were none the wiser that Jamaat members had shot their way into the Red House, the seat of parliament, and attempted to overthrow our democratically elected government while the house was in session. The group had also simultaneously infiltrated police headquarters by setting off a bomb (which was where the smoke that led us off our route had been coming from), Radio Trinidad, and neighbouring TTT, which Bakr used as his channel of communication to claim that the Jamaat was now in control of the country.

Had we not diverted into Port of Spain, I might well have been in and out of Television House, as it was called, before it was seized, before the men inside were held hostage — for nearly a week, with many of them suffering lifelong psychological effects. Instead, my close call came when my friend attempted to drop me off at TTT to deliver the tapes. We were about a block away when a small group of insurrectionists began to stride towards us like giants, all of them toting automatic rifles. They fanned out in a line, blocking our path. My friend hit the brakes, staring in utter disbelief. I had to shout at him to reverse.

Days later, TTT production staff were called to a meeting at Camp Ogden, a key army base. The fact that an outside broadcast (OB) unit had been covering an international friendly football match in the national stadium at the time of the incursion proved fortuitous: the signal to Television House was eventually blocked and the station was able to broadcast from the OB unit. There was now a strict curfew in place. Those who received special media passes were to go out into the field and get whatever footage they could. It was an assignment deemed “too dangerous” for women, but I managed to secure a pass and access to a camera.

The footage I shot of the aftermath only tells a portion of the story — and while contributing to the narrative has value, I also believe it's not enough. In the absence of justice, in the absence of a united apology, of a professionally guided national discourse about our collective trauma, or a cohesive post-mortem, all we have are shards.

Apart from a period of incarceration while legal appeals were going on, Bakr and his men did not serve time for what they did. They surrendered with copies of an amnesty agreement in their pockets. The amnesty was later invalidated by the Privy Council with the caveat that so much time had passed it would be unreasonable to prosecute at that stage. It took us 20 years to mobilise a commission of inquiry into the coup attempt, and even then, its findings were not satisfactorily acted upon. Try piecing together an image of how the 1990 insurrection forever changed us, both as a democracy and as a society, with fragments so worn away by pain and time and inertia, I wonder if they still fit.

Of course, there have been attempts to paint a picture. The National Trust and National Archives, the media, and the Rotunda Gallery at the Red House have compiled testimonies, photographs and memorabilia of different coup experiences. The storming of parliament is transcribed in Hansard. The current president, Paula-Mae Weekes, has made an annual observance of the coup attempt by installing signage with the names of the 24 victims in front of President's House. One coup survivor, Wendell Eversley, makes an annual walk to commemorate those slain in the insurrection and people pay their respects at the memorial of the eternal flame. Survivors wrote books to document their ordeals and calypsonian David Rudder recorded a song about it.

But more than three decades on — a generation later — are we any closer to understanding and healing, or is the wound still festering? As Trinidad and Tobago continues to grapple with police brutality, violent crime (which many link directly to the coup attempt and the state's failure to hold the perpetrators to account), endemic corruption, and the drug trade (which Bakr insisted he was trying to clean up), I suspect we still have more questions than answers.

I've heard all manner of opinions about 1990 — from canonizing the insurgents to suggesting the only way for the country to recover from the coup's ripple effects is for the police to “wipe out” those who use it as a master class in how to get away with murder — and the two extremes make me realise how important it is for us to save the broken pieces of the mirror that we do have. But it is also important that we fill in the gaps. Bakr may be dead, but the Jamaat can still help provide answers. The only way a true picture will emerge is collectively. It won't be perfectly told, there will be complexities and realities that are difficult to confront, but we will see ourselves.

Might we be able to collate the information in one place? What if that place were some sort of museum that could chronicle the event and its resulting effects? Would a virtual space be easier and more cost-effective to achieve, and have a wider reach? The 1990 insurrection should be on the school curriculum, but we need a comprehensive view of it. We are a young nation, I know. We are still learning. But let's not treat critical things so casually that their significance slips away. We have become very outspoken, and rightfully so, about the ways in which our colonisers whitewashed our early history. But recent history is critical too, and if we do not actively take hold of the narrative ourselves, someone else will do it for us, and it will be replete with the kinds of inaccuracies and distortions that made far too many of us believe and regurgitate lies.

Let's make reliable information about our history more accessible. Could the National Archives, for instance, charge a membership fee for online access to its material? However we choose to gather the remnants of 1990 as a legitimate and necessary step in taking hold of our collective destiny, we must do so carefully, before too much more time passes and bends our memories.

Shards only make sense when they come together. Scattered, they are not powerful enough to counteract the lingering after-effects of that dark and bloody day. Combined, they may just ensure that Trinidad and Tobago's attempted coup does not deliver its coup de grâce.