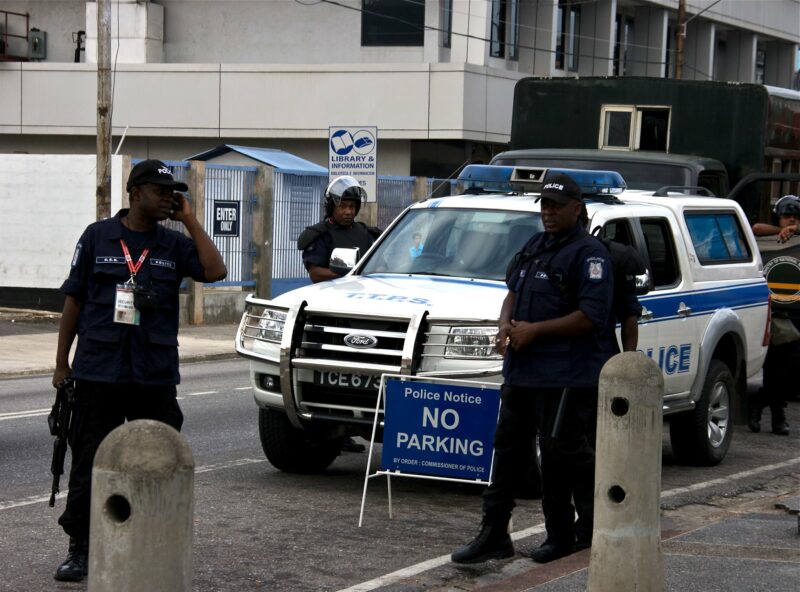 Riot police outside the St. James amphitheatre in Port of Spain, Trinidad, on April 18, 2009. Photo by Georgia Popplewell on Flickr, CC BY-NC-ND 2.0.

Just over two years after members of the Trinidad and Tobago Police Service (TTPS) killed three people from the disenfranchised community of Morvant/Laventille in Trinidad's capital, Port of Spain, eight officers have been held in connection with the incident. The shooting, which took place on June 27, 2020, is alleged to be related to the death of police officer Allen Moseley, who was shot dead in the area. Some reports, however, claim that as many as 18 officers were present at the scene, so it is possible that more detentions may follow.

Emphasising that this investigation was part of the TTPS’ commitment to ensuring that no one is above the law, Commissioner of Police McDonald Jacob confirmed that the officers would be interviewed by investigators from the Professional Standards Bureau, after which Director of Public Prosecutions Roger Gaspard would determine whether the group will face charges.

Commissioner Jacob was hesitant to disclose further details since the investigation is ongoing, but he did say that “operations like these, are about ensuring justice and maintaining the rule of law”:

On June 29, 2020, following the deaths of the three men — Israel Clinton, Noel Diamond, and Joel Jacobs — protests erupted in several communities across Trinidad, with residents blocking roadways, burning tyres, and even comparing the killings to the murder of George Floyd.

The officers claimed that the men shot at them and they returned fire, but security camera footage of the incident showed at least one of the men raising his arms in surrender before being shot.

These initial police detentions signal some measure of hope for many who interpret the killings to have been extrajudicial. One of the victims, Clinton, who was acquitted of theft charges laid against him a few years ago, was in the process of suing the state for police brutality over a related beating that had left him hospitalised for weeks, and attorneys for the families of two of the deceased have labelled their deaths “extra-legal,” “arbitrary” and “summary executions.”

The Police Complaints Authority (PCA) is the country's only civilian oversight entity, established by Parliament to “keep watch over the police,” but it has garnered a reputation for being a “toothless bulldog” that has had little effect on the high rate of police brutality, especially in poorer communities.

The PCA did experience a recent win, however. In an investigation into the fatal shooting of police constable Clarence Gilkes on April 22, the PCA determined that the incident represented a clear abuse of police power. Gilkes, it was found, was killed not by an armed civilian as officers originally asserted, but a fellow police officer.

On the heels of the country's most recent protests over police killings on July 4, this time over the shooting of three young Black men from the same area, columnist Noble Philip observed in a guest post at Wired868:

Who is to blame for the Monday shutdown? Is it the protesting residents who lost their children to a suspicious shooting? They know the story of the three Morvant men who lost their lives at the hands of the Police.

Since November 2020, the Police Complaints Authority (PCA) file has been sitting with the Director of Public Prosecution (DPP).

Accusing successive governments of using the residents of downtrodden urban communities for their own political gain, Philip argued that the core issue is “a working out of the ‘cockroach’ philosophy”, referencing to a derogatory term famously used by former Commissioner of Police Gary Griffith to refer to people from such communities. Philip noted that:

The black young men of East Port of Spain are treated as though they have no value. Their schools and neighbourhoods are under-resourced. Why? Because they are Nobodies! […] Let us not be fooled; the price for this neglect is high and must be paid.

In 2020, when the incident over which these officer detentions occurred, police killings in Trinidad and Tobago had increased by as much as 86 percent, reigniting discussion over issues like the widening economic gap, the link between systemic racism, police brutality, and the type of commentary that occurs in the wake of each new police killing, further eroding public trust in the protective services.

Facebook user Sherma Wilson, a resident of one of the communities that experience police brutality, strove to reclaim the narrative while firmly holding onto her community's constitutional right to protest:

We have been unfairly treated for decades […] Like all other communities we have our negatives and challenges, but next time you see the smoke jus[t] know that there is a fire burning in us to do better, to want better and that unlike you we are brave enough to stand up fight for our injustices.

Wilson ended her post by paying tribute to the fallen:

(Morvant triple killings) Joel “Lion” Jacobs, 38, Noel Diamond, 46, and Israel Moses Clinton, 27
All brutally killed by the hands of the Police
You will always be in our hearts ♥️

Update: A few days after being detained, the eight officers were charged with murder.