One of the biggest media in this war is Telegram. 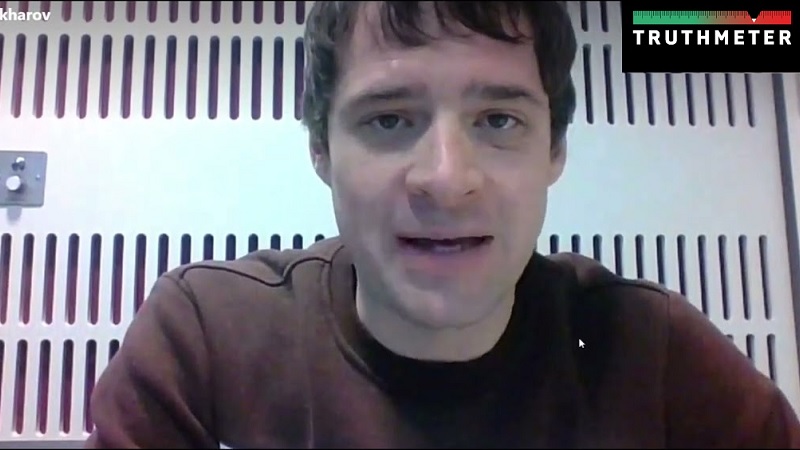 Andrey Zakharov. Screenshot from a Youtube video by Truthmeter.mk.

This interview conducted by Goran Lefkov was originally published by Truthmeter.mk. An edited version is republished here under a content-sharing agreement between Global Voices and Metamorphosis Foundation.

Andrey Zakharov is an investigative journalist from the BBC Russian service. Like many other journalists he moved from Russia last November and is currently living in a European country. In an interview for Truthmeter.mk, he speaks about the nature  of Russian propaganda and media sphere, and the support for President Vladimir Putin among the citizens.

Truthmeter.mk: You are the first journalist who published the story about the Saint Petersburg troll factory for spreading Russian propaganda all over the world. How is  this system functioning now, with the war in Ukraine?

Andrey Zakharov (AZ): Propaganda is one of the basic things in this war. We see several levels of propaganda — one level is the state propaganda, TV news agencies which have a monopoly. All independent TV channels were closed, almost every widely popular independent media on internet were blocked since the war started, including BBC. Only some small regional media remain.

Another level are the trolls factories, like the one based in Saint Petersburg. They even rent a specific office for covering this war, similarly to their focus on USA elections in 2016. This factory is supposed to be owned by Yevgeny Prigozhin, businessman close to Putin and the Kremlin.

Another level of propaganda are state news agencies, like the one that helps regional and Moscow authorities to cover different activities, but they are also involved in war propaganda.

We see this huge propaganda machine which works extremely hard. For example, from the beginning of the war, the two state TV channels have no entertainment programs during the day. From the morning till the evening there are only news and political talk shows about the war from government perspective.

Truthmeter.mk: Do you think the propaganda works successfully?

Truthmeter.mk:  What was the impact of closing Russia Today and Sputnik in the western countries? How is Russia spreading propaganda on global level? How do you see this in perspective on media freedom?

AZ: In fact, Russia Today wasn’t so popular in the most countries where it was broadcasted. Like in Great Britain, I think that less than 1 percent of the people watched it, so it was not effective. Their YouTube channels in Germany were popular, but are blocked now, so I think they lost some audience there. But even if they had this audience, they wouldn’t have anything different to offer, as very few foreign people would believe them and trust their weak explanations — that everything else is fake, except for what comes from the Russian Ministry of Defense.

If you had asked me this question before the war, I would have said that every media should exist, and the audience will choose who to believe and decide whether the information is true or not. With the war, all media that still think the war is a good thing and follow a bloody discourse, should be closed. In my opinion, before the war, Russia Today and Sputnik should have existed, but after this, I support the block.

Truthmeter.mk:  What do you think about Kremlin propaganda on Ukraine territory and how do you expect this propaganda to develop in the future?

AZ: Their main mistake was the expectation that people of Ukraine will welcome them and will be happy with this occupation. I know people that supported Russia before the war, who are now are anti-Russian. Maybe there are some strange people who still think the war is good. We see that Russian propaganda is not as effective even though that Ukrainians can still watch Russian television on the internet.

One of the biggest media platforms in this war is Telegram. Telegram channels are very popular in Russia and Ukraine, those are the new media. The channel of Russian independent media Meduza has more than 1 million subscribers. Our BBC telegram channel in Russia has over 300,000 subscribers. You post one short news on your channel on Telegram and in several hours 100,000 people read the news. That’s a great opportunity. There are extremely popular Telegram channels on both sides. Ukrainians can also watch Russian channels, but they don’t believe them, because they think the war should have been stopped.

In some cities, like Mariupol, the Russians switched on the Russian TV channels and switched off the Ukrainian TV channels, hoping that Ukrainians will support them. This didn't work because most modern people, except for old people, take information from the internet to see what’s happening in reality. That is why I think the Russian propaganda is not effective.

Truthmeter.mk:  How are Russian businessmen with investments in the Balkan countries dealing with these issues?

AZ: I don’t think that Russian propaganda is strong on the Balkans now. It is focused on other regions, while Russia’s main friend in the region is Serbia. It is enough for Russia in this situation. I don’t see any direct activities in Bulgaria and Macedonia. But if we speak about businessman with Russian origins, it is difficult for them all over the world now, because there are only few countries in the world that support Russia. I think maybe in Serbia, but I don’t know how many people, really support Russia.

In Bulgaria, traditionally people support Russia, but we still saw a big anti-Russian rally in the central Sofia and on the other hand, the pro-Russian rally was very small.

Russian businessman prefer to be silent, or if they say they are against the war, they will have sanctions or deal with harassment or expulsion.

Truthmeter.mk:  How did you leave Russia, and what’s happening with the Russian service of BBC in Moscow?

AZ: I left Russia before the war in November last year because I was designated as “foreign agent in Russia.” This official status means a lot of bureaucratic problems that can lead to jail. So I left, like many independent investigative journalists did before.

Since the war started, hundreds of journalists left Russia after remaining independent media were blocked, including extremely popular outlets with several million visitors per, like Meduza, as well as TV Rain and BBC Russian service.

Even though BBC Russian service is blocked in Russia, people can still watch it on VPN. Last month VPN was the most popular downloaded Google Play service, as means for reaching independent news sources about the war.

Truthmeter.mk:  Does Putin’s regime have support among ordinary citizens?

AZ: A lot of people really support the war, and it’s not only about propaganda, which was preparing people for this war for 8 years, since Crimea action. Although state propaganda was really preparing people, saying the war is good and Ukraine is a fake country, within the post-imperial context it also raised some negative feelings in people's minds.

We can’t say that this is only Putin’s war. Although I’m sure that if we had another president who didn’t step up to prepare people for this war, we wouldn’t see this much support. People support it.

But, people will feel the effects of the war later. In a half of year or after one year. I think people will be changing their mind about this war, step by step, due to economy crises. But this process can’t happen fast. If people realize and admit that this war is a crime, it will ruin the whole picture in their mind, from psychological point of view. It is a lengthy process, and we can’t expect it to happen tomorrow.