A disinformation campaign has taken hold 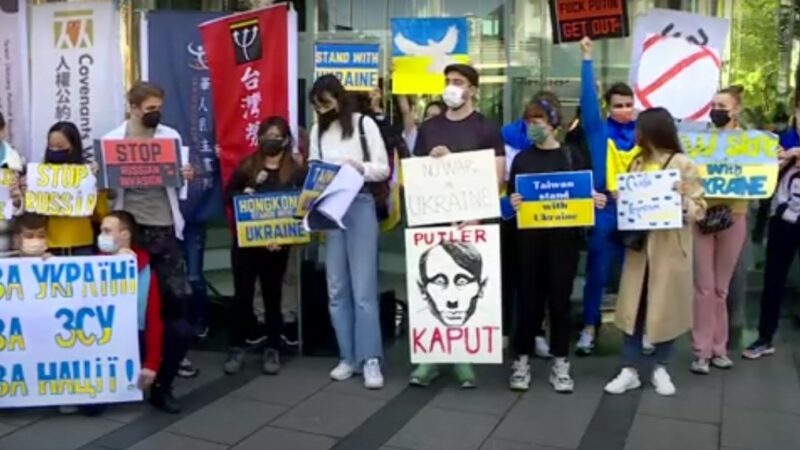 A rally against the Russian invasion of Ukraine in Taiwan, March 1, 2022. Screen capture from Formosa TV Network on Youtube.

To most Taiwanese, Ukraine seems to be a distant country with little relation to the island nation, yet Russia’s invasion of Ukraine has brought it to the center of domestic political issues, acting as a major political bellwether: just as Russian President Putin has repeatedly claimed that the Russian and Ukrainian people are united historically, Beijing has claimed Taiwan as its own territory.

Amidst Russia’s invasion of Ukraine, Taiwan’s President Tsai Ying-Wen and her administration have decided to join the sanctions led by the US and European Union and deliver medical supplies to Ukraine.

Taiwan is no exception to the misinformation wars

According to Taiwan FactCheck Center, there has a been significant amount of fake news about the Ukraine crisis circulated on Taiwan’s social media. Such content usually appropriates images that are taken from elsewhere to spread fear by showing the military strength of the Russian army. The messages attached to the images usually echo the circulating narrative that China’s army could take over Taiwan in a few days once it starts the so-called unification war.

For example, one fake item spotted by the Taiwan FactCheck Center is headlined “Ukraine army was attacked by Russia’s precise weapons. No one could escape. The scene was horrible” (烏克蘭車隊遭俄羅斯部隊精準武器襲擊，人員裝備無一倖免，現場慘不忍睹). The image used is actually a screenshot from a video game.

In addition to fake news coming from unverified sources, certain mainstream Taiwanese news outlets also failed to play their traditional gatekeeping role. For example, United Daily News, an influential newspaper founded in 1951, has sourced some of its news coverage from Russian propaganda outlet Sputnik News and falsely reported on February 26 that Ukraine's President Zelensky had fled the country.

The same disinformation was reported in a number of mainland Chinese news outlets, including the Chinese state-funded Global Times. Again, this untrue content resonates with a pro-China narrative that pro-Taiwan independent politicians would flee Taiwan immediately should China launch a military attack on the island.

The pro-China Kuomintang party (KMT) is laboriously trying to use the Ukraine crisis to promote its political agenda. Jaw Shaw-Kong, a KMT politician, argued that small countries like Taiwan and Ukraine should not provoke big countries like China and Russia:

While the Russian tanks are marching into Ukraine, there is no sign that the US will let their troops help Ukraine. The effect of sanctions would be limited. It is more effective to send the troops to stop the war, and there will be casualties at that time. […] We can see that the stance of the US is shifting all the time and is not reliable. […] It is clear what Ukraine can teach Taiwan: A small country should never irritate a big country! Taiwan is very close to Mainland China. We earn USD 1,700 hundred billion from China every year, and it is very important to keep cross-strait peace. If we keep irritating China, we are doomed to be in trouble one day. At the end of the day, it is Taiwan that is hurt most.

Many have voiced their opposition against the KMT's political stand. For example, Yi-Cheng Jou, an activist and entrepreneur preserving Taiwan’s culture, criticized the missing logic in the arguments:

Some people say, “Ukraine also did something wrong, and NATO should not press Russia too much.”
It seems to them that Ukraine must be a perfect country before we could support them to resist the invasion. […]

Miao Poya, a Taipei City Councilor from the Social Democratic Party, saw fear-mongering in the spread of fake news and pro-China narratives, as she pointed out on March 1:

While Russia started the invasion of Ukraine, the Chinese Communist Party (CCP) also started its propaganda war in Taiwan. The wind of public opinions became turbulent immediately, and there was anxiety filling in the air of our society.

Now the Ukrainians have resisted the Russian army for more than 120 hours, and they impress all of us. We have learned from their resistance that: The invasion from a superpower is not irresistible. The defense of a small country is not futile. Support from the allies also play a key role.

The most important thing is the belief and courage that Ukrainians, “men and women, senior and young, people working in various fields, all stand up to defend their homeland.” This “will to resist the invader” is what CCP plans to destroy in their propaganda war in Taiwan.

Amid the Ukraine crisis, many Taiwanese feel the threat of war and are reflecting what the nation should do if it comes to that. Albert Tzeng, a political columnist, posted his conversation with his daughter.

I have been glued to the internet watching the information and images about Ukraine for two nights. Mimi was sitting beside me. She asked me questions sometimes, and I explained to her succinctly. … Just before she went to bed today, she came to the living room to hug me. To my surprise, she asked me “Will Daddy leave us if there is a war?” I was stunned. I explained to her that when our country is invaded, I have the responsibility to join the army because I had been trained before. “If I do not go, and others do not go, there will be no one to protect Mimi and your sister.”
She asked me again and again, “Do you need to do it?” I nodded, and she cried. Listening to her crying, my eyes watered. Later I brought her to bed and promised her that “I will try my best to avoid the war.”

Poetry as protest: A Taiwanese way of countering narratives

Some expressed their opinions via poems. Lin Ki-Yo, a poet whose pen name means “toward the sun,” for example, shared his anti-war sentiment by posting some of his classic work. Other poets like Kuei-shien Lee, a Taiwanese poet who was nominated for the Nobel Prize in Literature in 2001, expressed his support to Ukraine with the following original poem, which evokes Ukraine's national flower, the Sunflower, as well as Taiwan's 2014 Sunflower Movement.

I put the seeds of sunflower
into the pocket of my military uniform
ready to turn my flesh in the battlefield
as their medium on earth
and irrigate them with my blood
on the sovereign territory in Ukraine.

I keep in mind the advice of my bride
to witness with my new uniform on site
and when return home after war
to cultivate this species of national flower
smiling toward the sky
on my free homeland in Ukraine.