Current events could be an eerie foreshadowing of Taiwan's future 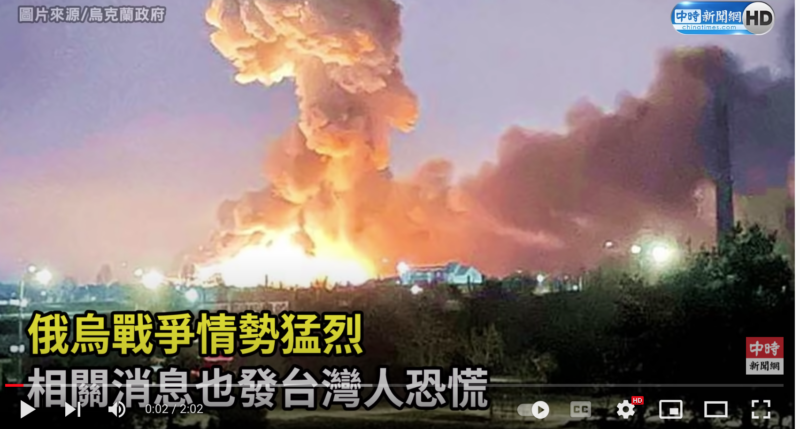 Despite the geographic distance between Taiwan and Ukraine, many Taiwanese anxiously follow Russia’s invasion as they project their own fears about a possible Chinese invasion of their island.

There are several political and historical parallels that explain why the Taiwanese pay special attention not just to the events on the ground in Ukraine but perhaps even more to the reactions of other governments.

Taiwan, a country of 23 million people, shares the same language and cultural heritage as the People’s Republic of China, and yet is under constant military threat from a Beijing that refuses to recognize the independence of a de facto sovereign entity that maintains its own government, currency, military, and diplomacy since the 1940s.

Beijing, just like Moscow, uses political and cultural arguments to deny the independence of Taiwan and to claim it will reunite the island with the mainland, with the use of military force if necessary. Chinese leader Xi Jinping has continued to maintain “reunification” with Taiwan remains part of China’s larger geopolitical ambitions.

The other parallel concerns military safety: Ukraine is not a member of NATO, but has been given assurances of a certain support from Europe and the US. Yet, as Russia continue its invasion, Brussels and Washington state clearly they will not send their troops onto Ukrainian territory, while providing technical, financial and political — and most recently, military — support. Instead, the US has increased their troop presence in NATO member states, bringing the total European deployment to 12,000. NATO has fortified its positions in Hungary, Slovakia, Romania and Poland.

This is almost exactly a scenario that could develop in Taiwan should Beijing decide to launch a military attack on the island. Taiwan relies for its safety on, besides its own military forces, the Taiwan Relations Act (TRA) enacted by the US Congress in 1979, which says that “the United States will make available to Taiwan such defense articles and defense services in such quantity as may be necessary to enable Taiwan to maintain a sufficient self-defense capabilities,” while not directly guaranteeing Washington would intervene in the case of a Chinese invasion.

Thus, from the point of view of Taiwanese public opinion, how Washington, Tokyo, but also Beijing and Brussels react to the Russian war in Ukraine can be interpreted as a sign of how they might react in the case of an invasion of Taiwan. Veteran New York journalist Fan Qifei has pointed out the suspicious support of Putin’s actions in Ukraine by Xi Jinping, and the potential ramifications for Taiwan.

Reactions to Russia’s invasion in Beijing and Taipei

While Beijing sides with Moscow on a number of global issues, including its criticism of NATO, China to this day has not recognized the 2014 Russian annexation of Crimea, a Ukrainian territory currently controlled by Moscow. Similarly, Beijing has not recognized the entities of the self-declared Republics of Donetsk and Luhansk in the eastern parts of Ukraine. Moscow recognized those two entities as independent countries on February 21, 2022.

While calling for diplomatic solutions, Beijing does condemn the West, specifically Washington and NATO, for “provoking Russia” into war. On February 25, Chinese leader Xi Jinping and Putin held a phone conversation and Beijing called for “abandoning the Cold War mentality” while refusing to use the term “invasion” when describing the situation on the ground in Ukraine.

Beijing abstained from the February 25 UN Security Council vote to condemn Russia’s invasion of Ukraine. While Xi Jinping has echoed the UN Charter and importance of Ukraine’s territorial integrity, he simultaneously denounced NATO’s expansion into the Russian sphere of influence, calling for diplomatic talks to resolve the war.

Taiwan, known for its high tech industry, has quickly joined the US, UK and EU-led call for increased sanctions against Russia and has officially condemned the Russian invasion. The small community of about 200 Ukrainians living in Taiwan has also expressed their deep concern for the safety of their relatives in Ukraine.

In response to the ongoing conflict, Taiwan's president  Tsai Ing-Wen expressed that her administration will “continue to strengthen our readiness to respond to military developments in the Taiwan Strait,” and, in addition, “comprehensively strengthen our response to cognitive warfare in order to shore up public morale.”

How the Taiwanese comment on the situation in Ukraine

Citizens and institutions across Taiwan have expressed support for Ukraine. On February 26, Taipei 101, the capitals’ most iconic building, was lit up in blue and yellow, the colors of the Ukrainian flag. On the same day, the finale of the Kaohsiung's 228 Lantern Festival celebration showered the stage in blue and yellow, as can be seen in this tweet:

Felt a little emotional when the #Taipei skies darkened and the top of #Taipei101, #Taiwan’s tallest building lit up. The tower’s colours change every day. Tonight #Taiwan stands with #Ukraine pic.twitter.com/q8aGWn2ZOw

Indeed, many across the island are looking at the conflict between Russia and Ukraine, and especially its international response, as a warning about Taiwan’s own precarious geopolitical situation.

Lu Qiuyuan, lawyer and Assistant Professor at Soochow University, expressed his outrage at the conflict and outlined the 10 lessons of the war in Ukraine for Taiwan. Centrally, Qiuyuan has cast doubt on the capacity of the international community to walk the talk.  As he explains in his first and second points:

1. People who keep advocating the same language and language from different countries usually don't mean well.
2. Don't trust the international community too much. Much of their so-called support is just talk.

Sean Su, co-founder of The Taiwan Report and Keep Taiwan Free notes when speaking to Global Voices  that “right now all the news are talking about Ukraine and how it might affect Taiwan. In the absolute worst case scenario, China will do the same thing to us and the world will respond with the same ineffective half measure. ” He adds: “emotionally it definitely hits home. The big concern here is if it takes so many months to challenge Putin’s military buildup on Ukraine’s border (whose economy is size of Italy) what happens when the world’s second largest economy goes after Taiwan? Will the world respond just as slowly?”

On February 26, citizens of Taiwan and many members of the international diaspora organized a protest at the Russian Representative Office in Taipei. Ruslan Lysenko, a citizen of Ukraine living and working for a Taiwanese tech company came out to show support for his family currently besieged north of Kyiv. Lysenko spoke to Global Voices and reiterated the uncertainty on the island:

Many are trying to understand the situation in any way they can, but they are very shaken. Ukraine doesn’t have very many connections to Taiwan, so it still feels very far away, but those who are involved are very worried that if the international treaties and agreements are not enforced in the case of Ukraine, then what could Taiwan expect from a world that barely recognizes its sovereignty?

Alex Kuzman, a Russian citizen working as a software entrepreneur in Taiwan came to the protest to condemn Russia’s actions.

I was just shocked when it all started, I couldn’t imagine that it could happen in my lifetime. It still feels unreal. The Russia regime is now at a breaking point, this is beginning of the end, and it should be a warning to countries like China.

Taiwan’s media has echoed a similar line of opposition to Russian aggression in Ukraine. Apple Daily, a Hong Kong newspaper shutdown in 2021 that relocated to Taiwan, has compared Putin’s actions in Ukraine to Stalinism.

Mindi World News, an independent reporting agency based in Taipei, voiced doubt in the supposed efficacy of sanctions and the repercussions of the precedent on China’s calculations towards Taiwan, wondering if  “中國是不是打算參考俄羅斯劇本，用在台灣身上？” “Is China planning to refer to the Russian script and use it on Taiwan?

Not everyone across the island holds a similar view. Chiu Yi, a former Kuomintang and People First Party legislator, and critique of the Tsai Ing-wen government voiced understanding for Russia on his public Facebook page, arguing that Ukraine brought this upon themselves by relying so much on the United States.

As the war unfolds across Ukraine, many in Taiwan are paying special attention. The response of all nations to Russian aggression will set important precedents for how the world will react when such injustices happen again. Time will tell if Moscow’s gamble will embolden illegal military adventurism or sound an important warning to aggressors across the world.