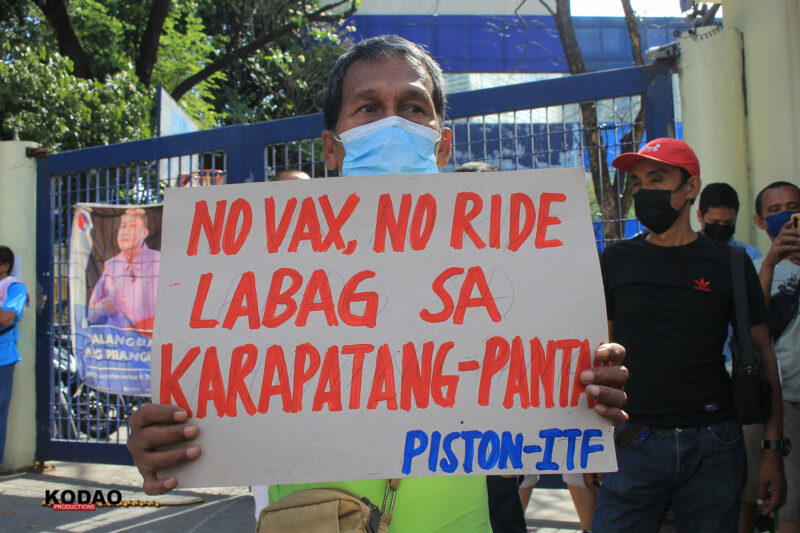 A protester holds a placard which describes the ‘no vaccination, no ride’ policy as a violation of human rights. Photo by Kodao Productions, a content partner of Global Voices.

Philippine President Rodrigo Duterte has imposed movement restrictions for people who have yet to be vaccinated amid a surge of COVID-19 infections that have hit the country since the New Year. The latest wave is attributed to the Omicron variant, which is now considered dominant in the Philippines.

The Duterte government’s new measures forbid unvaccinated people from taking public transport or entering indoor businesses. This new set of orders compel the unvaccinated to stay at home or risk facing arrest. In a January 6, 2022 public address, Duterte himself instructed village (barangay) officials to actively search for unvaccinated citizens and arrest those who defy his orders:

I'm now giving orders to the barangay captains to look for those persons who are not vaccinated and just request them — or order them if you may — to stay put… If [they] refuse, then the barangay captain, being a person in authority, is empowered now to arrest the recalcitrant persons.

A few days later, a government report said seven cities and municipalities in the national capital region have instituted ordinances restricting the movement of the unvaccinated and imposing monetary fines to violators. More local governments have followed suit.

Yet these measures are now being criticized by civil society groups claiming the punitive acts do nothing to effectively curb the spread of the virus, but instead, spawn rights abuses. Renato Reyes, spokesperson of civil society coalition Bayan (The People), says the Duterte government is passing on the blame for its negligent pandemic response to the people:

A government report shows that only 54 million Filipinos of a population of 110 million have been fully vaccinated as of January 14, 2022. Vaccination is moreover concentrated in the national capital region, Manila, leaving out many people from other provinces and rural areas. Only 3.8 million people have received booster shots.

Attacks on the working poor

On January 17, 2022, the first day of the public transport ban for the unvaccinated, news reports of a partially vaccinated commuter who was denied a bus ride went viral on social media.

So heart-breaking to see this. The ineptness and incompetence of this gov’t is too much that a full grown adult would just break down and cry out of frustration. I can feel it and it’s absurd that we have to go through this every day. https://t.co/CaiP8naXkj

The news footage showed a visibly-frustrated Dianne tearfully explaining that she needed to go to work, that she had in fact taken the first dose of her vaccine, and it wasn’t her fault if her second dose is still scheduled for February: “Napapagod na ako. Diyos ko” [I’m exhausted. My God].

It's always like this. From announcing lockdowns on midnight effective the next morning to this. In the end, the poor are the ones most affected. Is it the people's fault that their second dose is still in February? Just reminding the government that we had vaccines late https://t.co/ZV8gxH5QUg

Another viral video showed a balut (fertilized duck egg) vendor cursing President Duterte for the new measures that disallowed her from using public transportation and denied her entry from the public market. Gemma Parina said she used to be a Duterte supporter but the government’s anti-poor policies made her change her mind:

You know, President, I am a fan of yours, I voted for you. When you went to Luneta, I was very enthusiastic to see you, I even wore a Duterte shirt. But, president, ever since you imposed the no vaccine, no ride [policy], I felt really bad because the person that I idolize is now making me suffer.

In a follow-up media interview, a teary-eyed Parina is shown apologizing for her remarks against the President, saying that she’s been forced to temporarily leave her residence after police and local authorities had been threatening to file charges against her.

Justice for Aling Gemma!
She has the right to criticize a govt that neglects and fails its people. Aling Gemma is one of many who who bear the brunt by DU30 admin's anti people policies.
The state's response only goes to show that they are cowards https://t.co/lJUaKUi5sO

For many, the Duterte government’s mad scramble to impose movement restrictions only exposes its lack of adequate preparations for the coming of the Omicron variant which had been identified as early as November 2021.

The Coalition for People’s Right to Health says the Duterte government refused to conduct mass testing and other urgent measures for the current surge: “We are basically paying the price for neglecting our healthcare system, neglecting testing and contact tracing for the longest time.”

The neglect is reflected in the Duterte government’s 2022 health budget which had been denounced for failing to allocate funds for health workers’ benefits and slashing the budget of government hospitals while increasing counterinsurgency and military spending.

Philippine health workers have been at the center of protests, demanding the release of unpaid risk allowances, hazard pay, and other benefits last September 2021 amid allegations of misuse of COVID-19 funds.

As the COVID-19 surge situation continues, more Filipinos are questioning the Duterte government’s reactive and militaristic approach that frames the pandemic as a national security issue requiring punitive measures and repression. Civil society groups assert that what is needed is a more pro-active and comprehensive response countering vaccine hesitancy with education, making vaccines and testing more accessible, and rechannelling much-needed public funds for health and other social services.