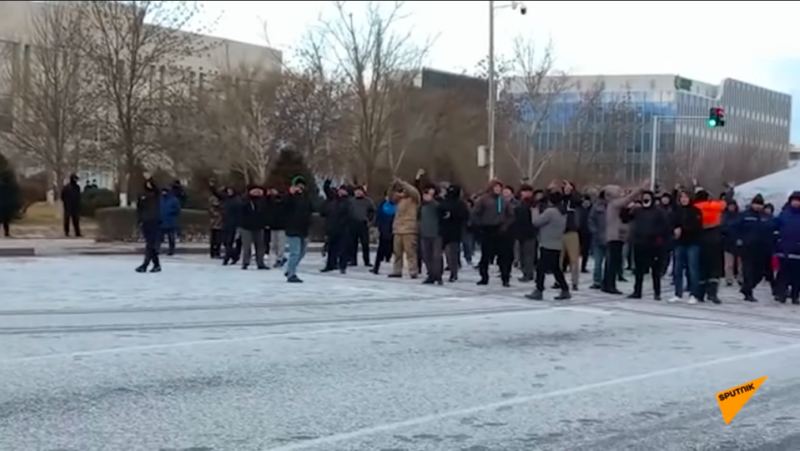 Protesters in the Mangistau region gather in the morning of January 4. Screenshot from Sputnik Kazakhstan's YouTube channel. Fair use.

Kazakhstan's President Kassym-Jomart Tokayev fired the cabinet and declared a state of emergency in the western Mangistau region and in the city of Almaty, after massive protests shook most cities across the country.

The reshuffle of government positions, as of January 5, includes the substitution of Prime Minister Askar Mamin with his former deputy, Alikhan Smailov, and the firing of state secretary and former Mangistau governor Krymbek Kusherbayev. Tokayev named political communication expert Yerlan Karin as the new state secretary.

The event that sparked the unrest was the sharp increase in the price of liquefied petroleum gas (LPG), the preferred fuel for cars in Kazakhstan's western regions. In Aktau, the capital of the Mangistau region, most automobiles are equipped with an extra LPG tank, which is kept in the trunk. LPG was much cheaper than gasoline and helped keep transport prices low. A taxi ride in Mangistau used to cost around half as much as in other parts of the country.

Poorly communicated by the government, the price hike brought people to the squares of Zhanaozen, an oil town near Aktau, on January 2 and 3. Nurlan Nogayev, the local governor and formerly minister of energy, addressed the protest, promising a review of the price reform. Yet, the anger of the population had already found an outlet in the squares of Aktau, Atyrau, Aktobe, and Uralsk to the north, and Shymkent in the south. On January 4, people in Almaty, the country's largest city, and in Nur-Sultan, the capital, as well as Karaganda, Taraz, and other urban centers, took to the streets. Reports from the Tengiz oilfield showed workers striking in solidarity with the protests.

The government's response was firm, as thousands of police and special forces were deployed as the crowds gathered. Unofficial accounts estimate that between 10,000 and 50,000 people went out to protest on January 4 across Kazakhstan. 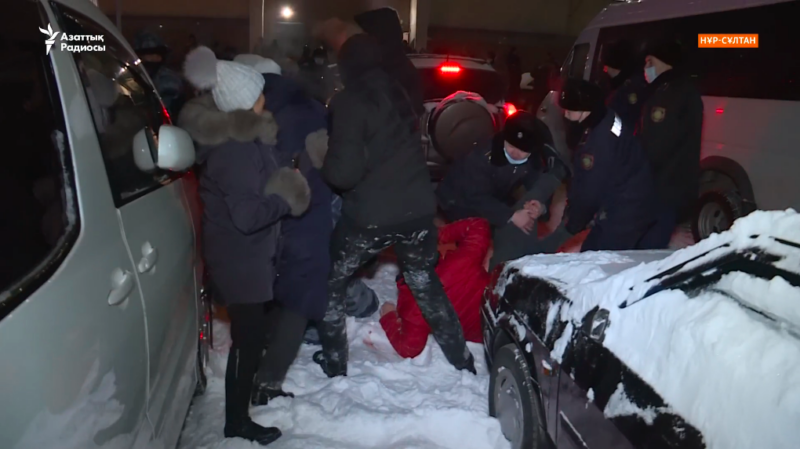 Police arrests protesters in Nur-Sultan on the evening of January 4. Screenshot from Azattyq's video. Fair use.

The more prominent activists were swiftly arrested and some of them reported beatings. The son of an independent journalist was shot at. Plainclothes policemen visited the home of a citizen journalist. An editor at US-funded media Radio Free Europe/Radio Liberty was detained for five hours. A correspondent for news outlet Mediazona was beaten by protesters as they vandalized a police car.

As tensions increased, especially in the streets of Almaty, the authorities used tear gas and stun grenades. The explosions could be heard into the night and the early hours of the morning of January 5 throughout the city center, residents told Global Voices.

In Almaty, the protest moved from Almaty Arena, a sports venue in the northeastern part of the city, to the Republic Square, which weeks ago was the theater of a much more modest gathering.

On December 16, Kazakhstan celebrated the 30th anniversary of its independence from the Soviet Union. That day, only around 100 people gathered on Republic Square in Almaty. Some came with flowers and prayed near the independence monument, paying respects to the students and citizens who rose up in protest against the Soviet leadership in 1986. The brutal repression of the protest resulted in several deaths, which were never independently investigated. The events of 1986 became known as Zheltoksan (from Kazakh, “December”). Zheltoksan Street now hosts the independence monument. 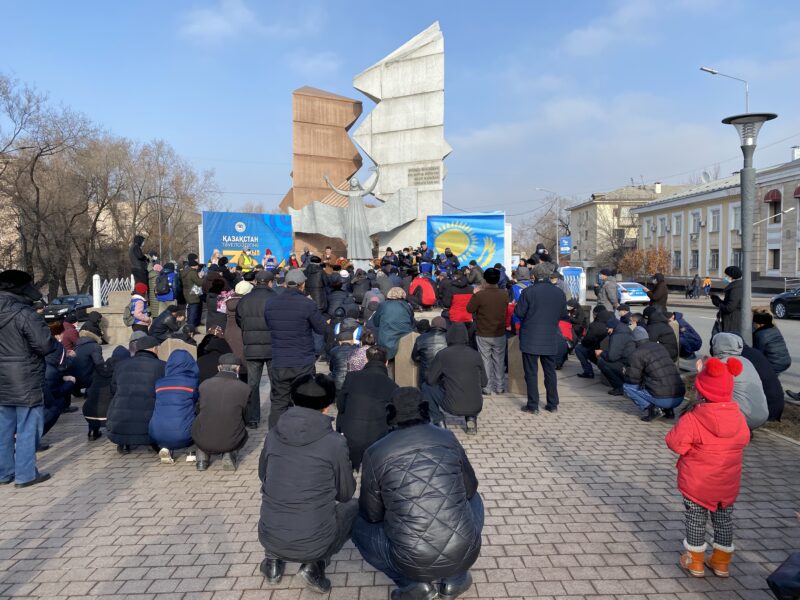 People gathered at the Independence Monument in Almaty on December 16, 2021. Photo by Paolo Sorbello, used with permission.

Another group gathered at noon under the slogan “Zheltoksan – Zhanaozen!” in reference to another dark page in Kazakhstan’s history. In 2011, after an eight-month strike, police and special forces opened fire on protesting oil workers in Zhanaozen, just as the city administration was readying the celebrations for the country’s 20th year since independence. Dozens were killed, and human rights organizations still demand an independent investigation of the events.

At the independence monument, another group of activists staged a brief performance to remember the state violence against students in 1986 and oil workers in 2011. Seven members of the youth group Oyan, Qazaqstan! dressed as white mannequins with targets on their backs and red paint on their hands and suits. Three members of the group had been detained ahead of the performance and were released shortly after.

The authorities had blocked the street that goes through Republic Square and controlled every corner in a 12-block radius. As people entered the circle, police asked for documents and plainclothes secret service officers interrogated members of the press on their accreditation. The atmosphere, however, was not as tense as the past two Independence Days. In 2019 and 2020, in fact, there were arrests and harsh forms of crowd control, such as kettling and preventive detentions.

A gas-fueled explosion of discontent

Earlier on January 2, the Energy Ministry tried to explain that the new electronic trade system for LPG had caused the sudden hike from KZT 60 to 120 (from USD 0.14 to 0.28) per liter. The explanation, however, could not convince local residents, who had long suspected that the energy elites of the hydrocarbon-rich regions were fixing prices in an effort to garner higher profits.

Suspicions of corruption, diminishing purchasing power, and galloping inflation were all factors in turning the “gas protest” into a full-fledged mass unrest.

On January 4, residents across the country called for the end of the regime established by former President Nursultan Nazarbayev, the establishment of a parliamentary republic, and an end to widespread corruption. Kazakhstan ranks among the worst in Transparency International's Corruption Perception Index.

Political commentator Dosym Satpayev said on Facebook that this is a sign of a crumbling political system.

The political system, which for decades was crafted around the desire to please one person, is bursting at the seams. […] And in this situation the authorities are mostly afraid of the solidarity with the Zhanaozen people shown by the residents of other regions of the country, since this contradicts its policy of “divide and rule.”

One of the most-heard slogans at the protests was “Shal ket!” (Kazakh for “Old man go away!”), a not-so-veiled reference to Nazarbayev.

With inequality and poverty at the center, the protests gathered momentum and easily spread across various cities, despite internet blockages and travel restrictions. Most messaging applications and social media services were inaccessible near the protest sites. News websites that were reporting from the squares were also blocked (among them, Orda News and KazTAG).

In the afternoon of January 4, President Tokayev ordered that the price of LPG in Mangistau be reduced to KZT 50 per liter, below the previous KZT 60 threshold. In a stern televised statement, Tokayev later urged his fellow countrymen “not to succumb to internal and external provocations, which trigger euphoria at the rallies,” adding that “the government won't fall.”

That night, Mediazona reported that the emergency rooms in Almaty were filled with several dozen injured.

As the situation develops and the political environment in the country is affected by the shockwaves of the protests, Kazakhstan's leadership will have to find a way to grapple with its population's dire socio-economic problems.