The former president insists he is the victim of political persecution 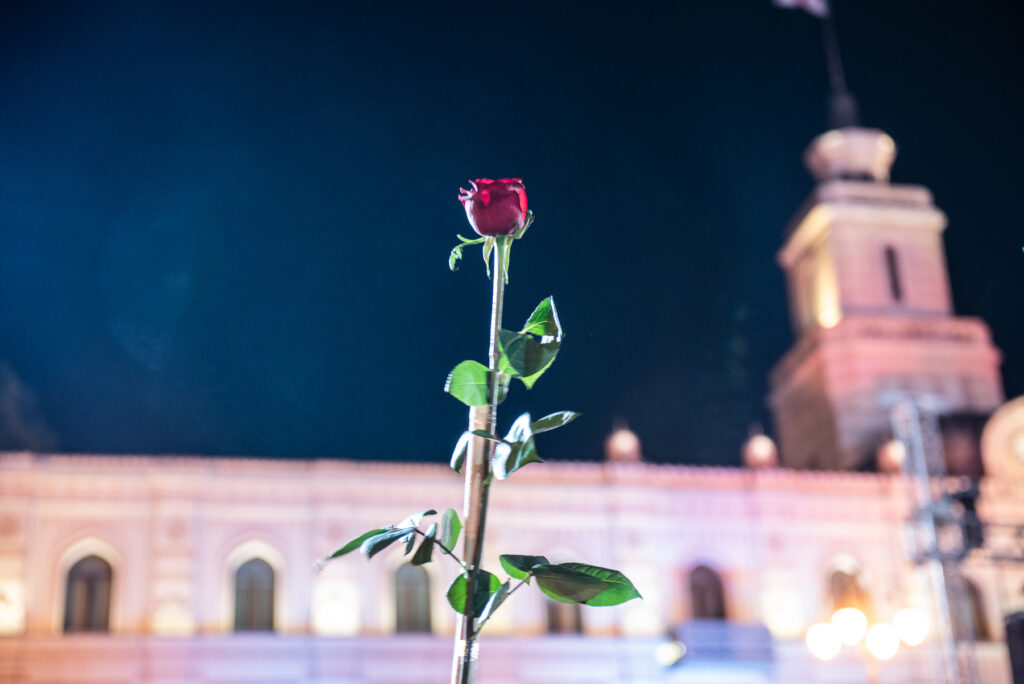 A woman at Thursday's protest held a rose aloft, symbolizing the Rose Revolution which swept Saakashvili to power in 2003. Photo: Mariam Nikuradze/OC Media.

This article by Shota Kincha was first published on OC Media. An edited version is republished here under a content partnership agreement.

In the capital city of Tbilisi, Georgia, thousands of residents gathered at the central square on October 14, in support of the former president Mikheil Saakashvili, who is on his 14th day of a hunger strike in prison.

The third Georgian President, currently a Ukrainian citizen heading the Executive Reforms Committee of Ukraine, was arrested two weeks ago after covertly crossing into Georgia on the eve of local elections.

Saakashvili has insisted he is the victim of political persecution ordered personally by Bidzina Ivanishvili, the ruling Georgian Dream Party's founder, and Russian President Vladimir Putin.

Saakashvili left Georgia in 2013 and was sentenced to six years in prison in absentia in 2018 on several accounts of abuse of power in Georgia. The former president denies the accusations.

He faces a minimum of six years in prison on charges ranging from ordering an attack on political opponent Valeri Gelashvili to illegally promising to pardon law enforcement officers implicated in the 2006 murder of Sandro Girgvliani.

The UNM mobilized supporters from across the country, with many arriving by convoy to the capital. They were greeted by several groups of counter-protestors holding brooms, with some throwing them at vehicles and cursing Saakashvili.

UNM leaders claimed the groups were mobilized by local officials belonging to the ruling party and public employees.

Snubbed by other opposition groups

While the UNM has insisted the demonstration voiced a cross-party and “national” demand, other opposition groups snubbed the event.

While still claiming that Saakashvili was unlikely to face a fair trial under the Georgian Dream government, opposition groups European Georgia, Lelo, Strategy Aghmashenebeli (more recently known as Third Power), and the Republican Party refused to join the protest outright.

Some underlined that the focus should remain on the second round of local elections scheduled for October 30. Several opposition leaders, nevertheless, decided to join the demonstration individually, including the Droa party leader and former UNM member Elene Khoshtaria.

In the second round of municipal elections, the ruling party faces runoffs in all five self-governing cities.

The Georgia party, led by former Prime Minister Giorgi Gakharia, distanced themselves from the event more than others by refusing to consider that Saakashvili's imprisonment was politically motivated.

Following his detention on October 1, Prime Minister Irakli Gharibashvili made several statements against Saakashvili, including threatening to press additional charges against him, earning him criticism both locally and internationally and raising questions over the ability of Georgia's justice system to provide the former president a fair trial.

While Ukrainian authorities vowed to seek his return to Ukraine, local news outlet Ukraynsy Novini reported that as of October 14, the Prosecutor General's Office of Ukraine had not made a request to extradite him.

How the former President sneaked into Georgia remains unclear.

Before and after his detention, Saakashvili poked fun at the Georgian authorities with photos published on his Facebook page allegedly showing him in Batumi and even in front of the Parliament Building in Tbilisi.

“I ordered Khinkali before being arrested. Unfortunately, I only managed to eat one,” Saakashvili joked in his latest written interview with the TV channel Mtavari.

“We wish Mikheil Saakashvili freedom. Today he is freer than us!,” Gigi Ugulava, a former UNM official, currently running for Mayor of Poti, said at Thursday's protest.

“Once upon a time, 18 years ago, he drank tea which changed the history of this country,” he said, in reference to Saakashvili drinking tea in then-president Eduard Shevednadze's office after protesters stormed parliament in 2003.

“Today he was not allowed to eat khinkali. He will definitely eat his khinkali and you will be left with the nubs. Because you deserve nothing more,” Ugulava said.

Saakashvili is expected in court next month over several other cases, including charges of illegal border crossing.

Saakashvili's detention has been closely monitored by Georgian Public Defender Nino Lomjaria, who recently criticized the authorities for disrespecting Saakashvili's privacy by publicizing details of his health.