For laws 'to act as a deterrent [...] there must be consequences for breaking them' 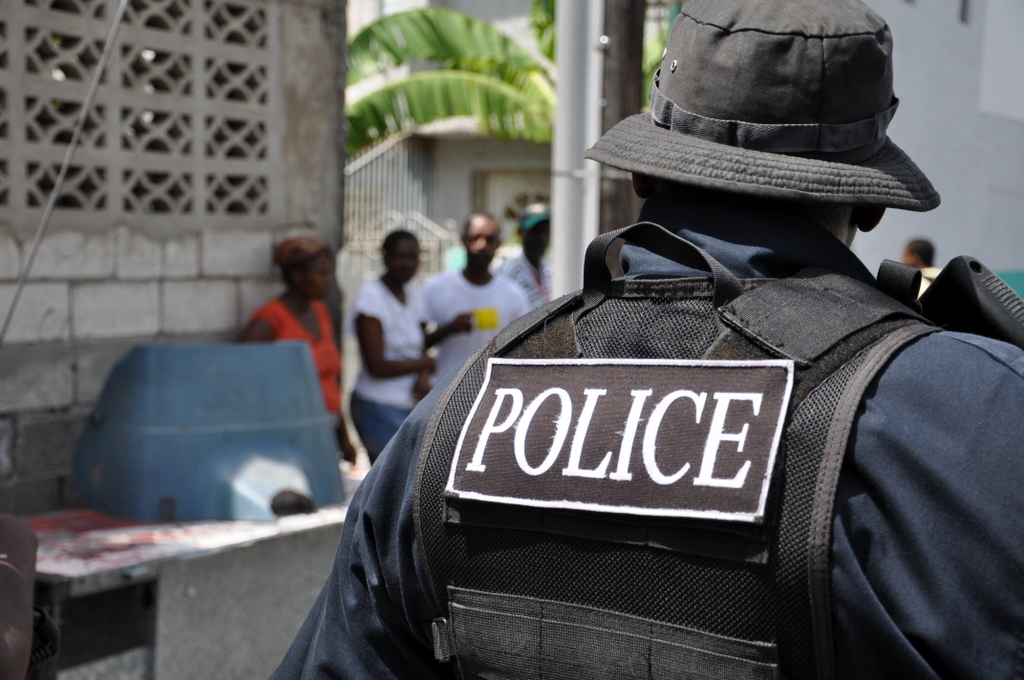 Police in a Jamaican community taken during the country's state of emergency in 2010. Photo by BBC World Service on Flickr, CC BY-NC 2.0.

On the nightly television news, there are tears and recriminations from family members as curious neighbours gather to stare at the scene of yet another murder. While Jamaica fights its way through a daunting “third wave” of the COVID-19 pandemic, another insidious, seemingly intractable trend continues: a rising homicide rate.

Throughout a recent series of three-day lockdowns to combat the increasing number of COVID-19 infections—over the period August 22 to September 14—violent crime continued unabated. According to the latest police statistics, murders have increased by 10.5 per cent compared with the same period in 2020 and, at 991 up to September 11, the island is about to reach the 1,000 mark for murders committed this year.

Three police divisions, two in the capital, Kingston, and one in the St. James area of Montego Bay along the country's north coast, have logged the highest numbers this year. According to police, as many as 72 per cent of the murders have been gangland killings.

The regional crime investigative reporting organisation Insight Crime reported that Jamaica had the highest murder rate in the Latin America/Caribbean region in 2020, at 46.5 per 100,000, ahead of Venezuela and Honduras.

Every time there is a spike in the murder rate or a high-profile crime—as was the case when four family members were killed recently—Jamaicans express deep concern about the soaring rate of violent crime. One Jamaican tweeted:

We really need to do something about crime. We're gonna keep acting like this is normal?

The government has taken a range of measures to combat crime in recent years. These include Zones of Special Operation, which parliament extended in five communities this past July for 60 days. At the time, Minister of National Security Horace Chang said that this approach had “positively impacted the lives” of community residents. However, murders and gang activity linger in some of these areas.

A National Consensus on Crime—an agreement among government, the parliamentary opposition, private sector, and civil society, which set out a road map for strengthening crime and anti-corruption legislation—was signed off on in mid-2020. An oversight committee, chaired by the head of the Jamaica Chamber of Commerce, has however expressed concern that the June 2021 deadlines for several targeted actions have been missed.

Meanwhile, Minister Chang has promised to introduce several pieces of new legislation in the current parliamentary session to combat crime.

This sudden surge in murders—24 in one week, and 18 over a 48-hour period—prompted a press briefing by Commissioner of Police Major General Antony Anderson on September 15. Pointing out that 92 per cent of those killings involved guns, the Commissioner emphasised the need for reform of Jamaica’s gun laws, calling the gun the “tool of death.”

According to an opinion poll published in early September, 27 per cent of respondents felt that crime had surpassed COVID-19 as the top problem facing the country. Participants in another major opinion poll conducted in February/March this year believed that more soldiers should be employed to tackle crime, as the perception is that they are more trustworthy than the police. Jamaicans have a complicated relationship with its police forces, stemming from a lack of trust based on past instances of police brutality and abuse of power.

Meanwhile, poverty, lack of economic opportunities and lack of social cohesion are often cited as the root causes of crime in areas such as West Kingston, where the infamous gang leader Christopher “Dudus” Coke once held sway.

At the press briefing, Commissioner Anderson stressed that the current non-custodial sentences imposed for the illegal possession of a firearm are no deterrent at all, adding:

They [the perpetrators] need to be in jail for a long time […] We have to take a different approach to the guns that are out there killing our people.

In response to a media question about ongoing crimes throughout lockdowns and curfews, the commissioner pointed out:

If laws are to act as a deterrent to crime, then there must be consequences for breaking them. Victims experience the consequences of criminal actions, yet so often, offenders face no real consequences. #RuleOfLaw#Respect4All#Force4Good pic.twitter.com/SvMyYAPHeG

While the police commissioner appeared to be indirectly pointing fingers at both lawmakers and the judicial system, public perception of corruption in Jamaica's police force persists. There have even been suggestions that the police are paid off to turn a blind eye to illegal parties taking place during COVID-19 lockdown periods.

Allegations of police misconduct, such as the recent alleged cutting of a Rastafarian woman's hair at a police station, are investigated by the Independent Commission of Investigations (INDECOM), which notes that it received 251 allegations of assault and unprofessional conduct by the police in the first six months of 2021.

Like many other organisations involved in the struggle against both COVID-19 and crime, INDECOM has a huge workload—and in the eyes of the Jamaican public, both issues are vying for the position of “top problem” on the island. For now, the long-term issue of crime is more pressing, since the solutions are complex and still appear somewhat out of reach.