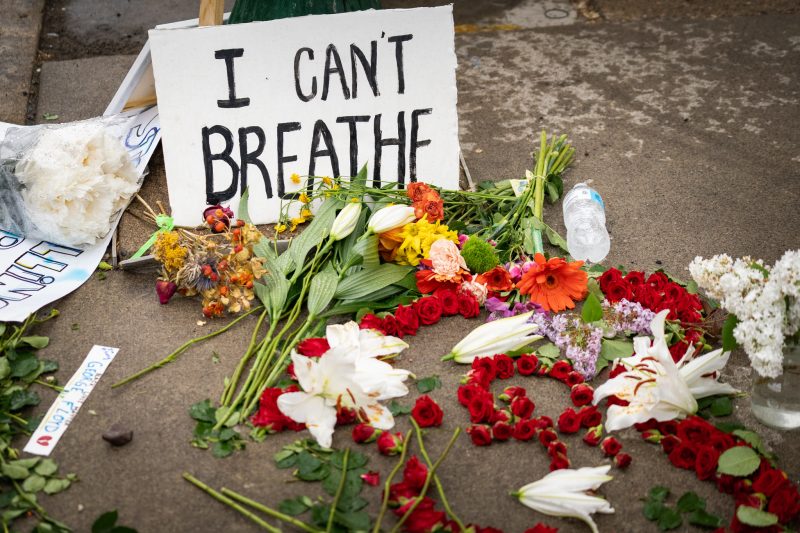 A memorial for George Floyd in South Minneapolis. Photo by Chad Davis on Flickr, CC BY-SA 2.0.

On April 20, nearly a year after George Floyd, the African-American man who repeatedly told the white police officer who knelt on his neck for an excruciating nine minutes that he couldn't breathe, a Minnesota court found Derek Chauvin guilty of all three charges against him — second and third-degree murder, and manslaughter.

Floyd's May 25 murder, which took place in broad daylight on a city street in full view of bystanders who begged Chauvin to stop — and fellow officers who stood back and did nothing — prompted massive anti-racism protests in the United States and internationally, including across the Caribbean.

Chauvin appeared incredulous as the verdict was read. Outside the courthouse, where hundreds of people had gathered in support of #JusticeForGeorgeFloyd, there was elation. Many people, including some members of Floyd's family, watched the announcement at home, and their relief at the unanimous guilty verdict was palpable.

The emotions in the Caribbean were similar; Trinidad and Tobago-based Franka Philip said on Facebook:

I feel relief for my friends in the US who have been awaiting justice, not just for George Floyd but for so many others who had no justice on earth.

At the same time, regional social media users acknowledged that justice being served in this one instance does not equate to change. Jamaican human rights advocate Susan Goffe retweeted:

THANK YOU! GUILTY! Justice is served but we have nothing to celebrate as nothing can ever give back the life taken away.

We need fair and equal treatment under the law. And whenever that fails to happen, then we need justice. And for those who don't know what justice is, justice MUST feel just. Zeen. RIP George Floyd. Justice is served. Thanks be to God, who commandeth us to love one another. ❤ pic.twitter.com/sxVgIOjh8X

Some of those “many more” were victims of police brutality within the region:

In the wake of the verdict in the George Floyd case I wonder when will the over 2000 families who had their family members killed by JCF officers in Jamaica in the last 20 years, when will they get their JUSTICE? @suezeecue @LexGoffe @CarolNarcisse

The Jamaica Constabulary Force (JCF) is not the only regional policing body accused of alleged abuse of its powers. At the southern end of the archipelago, in Trinidad and Tobago, Inspector Mark Hernandez, head of the police service's Special Operations Response Team (SORT), was recently charged for misbehaviour in public office over the deaths — in police custody — of Andrew Morris and Joel Balcon, who were brought in for questioning in the January 2021 kidnapping and murder of Andrea Bharatt.

Most netizens, therefore, understand that the guilty verdict is not a solution — not in the United States, and certainly not within the Caribbean:

This will NOT bring back George Floyd. It will however hopefully really start discourse about police brutality and race relations. Change how people of colour are treated.

A member of the Trinbagonian diaspora in the United States, Sonya Sanchez-Arias, felt similarly, explaining:

I think it was the offending police officer’s audacity that shook us. The nerve to murder someone in front of our eyes. It was his stubborn, unrelenting unwillingness to ease the pressure on Floyd’s neck that stopped us in our tracks.

In the nine minutes and 29 seconds it took for George Floyd to asphyxiate, everything shifted. It felt like the entire world saw red. Enough was enough. […]

Black Lives Matter was striving to challenge and change an American system that perpetuates violence and consistently excuses killing, but it was also asking, in its simplest terms, for equality, for humanity.

This week offered all of us the oddest conundrum: to have watched a man being murdered and wonder whether or not the murderer would be convicted, whether justice as we know it would be served or the officer protected. […]

His legal guilt is the first step on a long road to true justice. I recognize the guilty, guilty, guilty verdict is not a bandage for systemic inequality, but guilty, guilty, guilty sends a clear message: America will not tolerate this. Now There Is Legal Justice for George Floyd. So Why Do I Still Feel So Hollow?

Why? Because deep inside I know George Floyd is just the tip of the iceberg of so many black lives lost and the injustice and toxicity of too many years of systematic racism and white privileged complacency. There is so much work to be done!

At least one Jamaican Twitter user acknowledged the enormous debt owed to Darnella Frazier, the young black teen who filmed the entire incident on her phone, despite threats from the police officers to stop:

You know. We aren't thanking Darnella Frazier enough. Her courage in that moment was unmatched. She never once backed down and allowed the police to intimidate her. That video made the world of a difference in today's verdict.

However, after Juliet Holness — Member of Parliament and wife of Prime Minister Andrew Holness — tweeted about Jamaica's “long-standing problem with violence […] inherited from the days of slavery,” the online discourse became heated:

Jamaica state is violent. Parliament inherited it from the colonial office and lovingly upholds and expands it to this very day. https://t.co/IA6sQAbO8t

Given the uptick in gender-based violence in Jamaica, the tweet was interpreted as tone-deaf — but it is clear, at least to regional netizens, that the guilty verdicts in the George Floyd case merely constitute one small step in dismantling the racist systems that generally allow such injustices to happen with impunity.