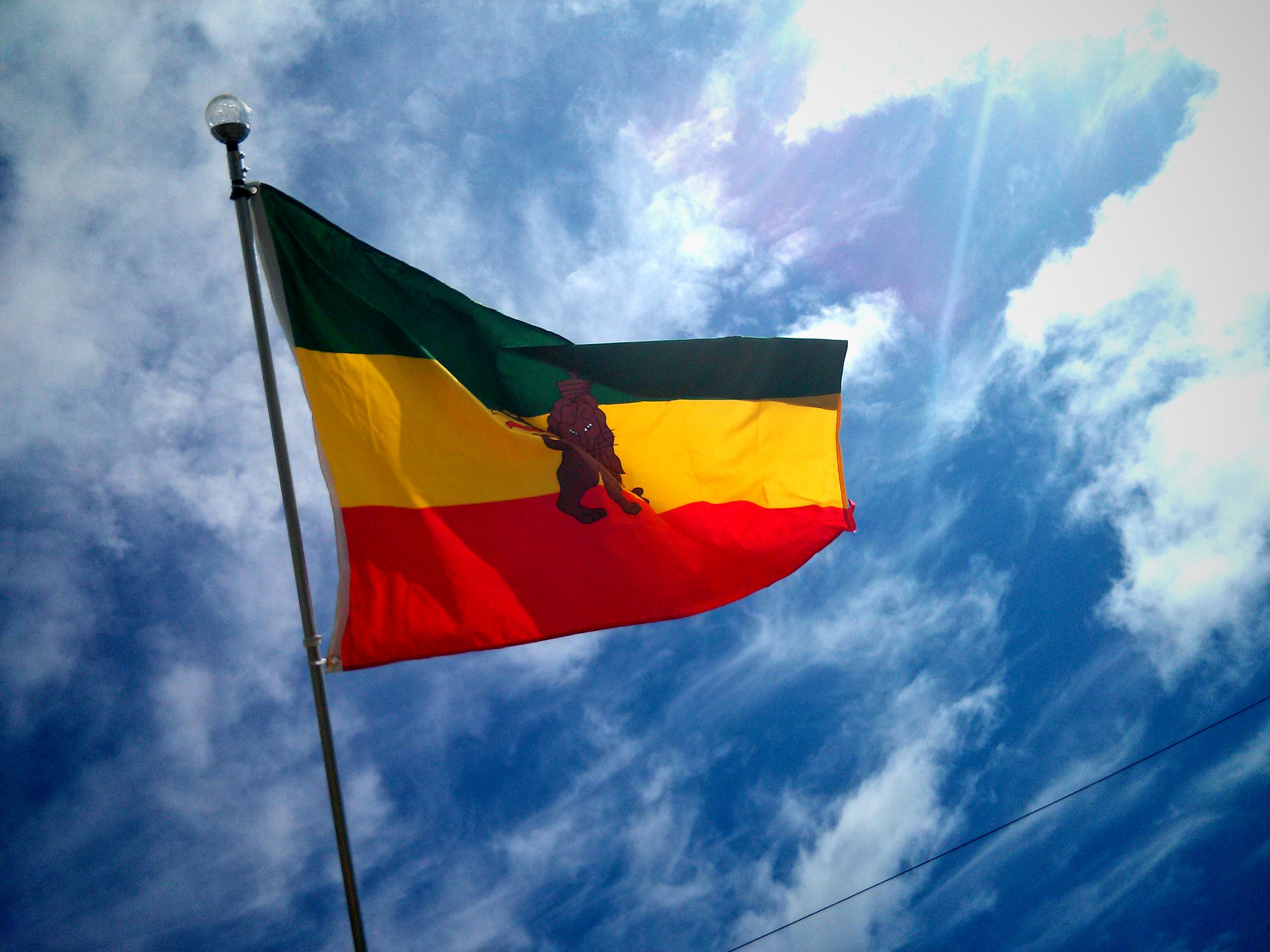 Rastafarians often claim the flag of Ethiopia at the time of Haile Selassie's reign, as a symbol of their faith. Photo by CJ on Flickr, CC BY 2.0.

There are some painful relics of Jamaica’s colonial history—many of them related to human rights—that its citizens would like to feel that they have put behind them. Quite apart from antiquated, colonial-era laws remaining on the books, there is a battle against outdated, discriminatory attitudes, as exemplified by the historically troubled relationship between Rastafarians and Jamaica's security forces.

Despite efforts to make amends and heal the wounds of past injustices, most notably Prime Minister Andrew Holness’ official apology for the notorious attacks by police and military personnel on the Rastafarian community of Coral Gardens in 1963, Jamaicans were recently infuriated by another form of violence against the community, after a young woman claimed that a police officer had cut her dreadlocks at a rural police station on July 22.

Nineteen-year-old nursing student Nzinga King, and her mother, Shirley McIntosh, said the officer had used a pair of scissors to cut King's hair while she was detained at Four Paths Police Station in the southern parish of Clarendon. She was sentenced to ten days in lock-up after being arrested for not wearing a mask and displaying “disorderly conduct” during an altercation with a police officer. Four days later, her mother paid her fine and King was released. The allegations quickly made headlines and prompted a wave of outrage in both mainstream and social media.

An indignant Letter to the Editor in the Jamaica Gleaner reminded people of the Coral Gardens incident:

Emancipation and Independence remain a scam, a fleeting illusion, as are constitutional and human rights. Queen Nzinga King, the liberation movement has begun in this another ‘Bad Friday’ Coral Gardens that is unearthed all over again…The curriculum at all educational and training institutions, including the security forces, must include teaching history and human rights.

The police commissioner’s office responded swiftly, promising a “fair and transparent” investigation and stressing in an August 2 press release:

The claims of Human Rights abuses made by the young woman and her mother are viewed by the High Command as very serious in nature and are, therefore, being treated as such. While investigations into the matter are ongoing, it must be stated categorically that the cutting of people’s hair — particularly that of Rastafarians — has NO place in the modern JCF [Jamaica Constabulary Force].

The Independent Commission of Investigations (INDECOM), which probes abuses by the police and military, is investigating the matter, noting in an August 3 statement:

INDECOM views the allegation, as expressed by the complainant in video footage, as a breach of rights as afforded to all citizens, under the Charter of Fundamental Rights and Freedoms.

The Office of the Public Defender is also looking into the matter:

The Office of the Public Defender says it has launched an investigation into a complaint that 19-year-old Rastafarian Nzinga King was forcibly trimmed by a woman cop.https://t.co/Z5ImQJYQ4f

On Twitter, there were outbursts of fury, and of sympathy for King:

Our heart goes out to #NzingaKing today. We hope the spirit of the great Queen Nzinga of Angola, will carry her through. #Jamaica … #Jamaica 2021. …… Sigh
Heard there is report of an investigation. I sincerely hope the state has provided counselling for this young lady. https://t.co/x5j652N448

Given that news of the incident broke over the Emancipation Day weekend, one Twitter user suggested that the concept of freedom remains elusive:

What @JamaicaConstab did to #NzingaKing so disgraceful and disgusting. No excuse at all. Yet we should celebrate Emancipation when we're still trapped ?https://t.co/MqI1NwoV99 pic.twitter.com/ADyK2pGTaV

This is Nzinga King whose locks babylon saw fit to cut.Whose rights to religion, freedom of expression etc meant nothing.Vociferous in defending her rights so arrested, charged,convicted & shorn. In yu place black people.Who do you think you are.Emancipendence is such an illusion pic.twitter.com/MN0uSZHf3h

A Clarendon-based Rastafarian group wants the police officer, who has not yet been named, removed from duty while the matter is being investigated. The group’s leader, Ras Ivi Tafari, asked:

How can Jamaica put up Bob Marley’s image to attract foreigners to the country when Rastas in Jamaica are being disenfranchised and disrespected? It looks like some of these police have that old trend in their mind that, when them see Rasta, them must think ‘trim and brutality’.

On the eve of Jamaica's Independence Day on August 5, Rastafarians in Montego Bay staged a street protest, while Mercia Frazer, the mother of Mario Deane, who died in 2014 after a violent beating by police, came out in support of the Rastafarians. Popular reggae singer Chronixx, himself a Rastafarian, visited King and her family after the incident. Sharing his thoughts in a video on his Instagram page, he suggested that the policewoman's behaviour was rooted in colonialism.

The idea of King’s religious rights being violated—she has reportedly been growing her locks since childhood—was echoed in the reaction from Minister of Culture Olivia “Babsy” Grange, who noted that the growing of hair was a “sacred religious practice” for the Rastafarian faith, as part of their “Nazarite vow”:

For many Jamaicans, this appeared to be yet another example of the policing of black hair. Over the years, there have been regular conflicts regarding natural hair and dreadlocks; children have even been banned from attending school over their hairstyle choices—and some netizens couldn't believe it was still happening:

This is 2021. @JamaicaConstab is still trimming the hair of rastafarians. Make this make sense. #nzingaking

Kristen Gyles, a graduate student at the University of the West Indies, suggested that this tendency illustrated Jamaicans’ rejection of their own cultural identity:

The colonialised Jamaican mind is truly a force to be reckoned with. It has parents scolding their children for speaking patois, high schoolers stocking their book-less school bags with cake soap, and schools turning away students for wearing ‘chiney bumps’ [a Bantu knot-inspired hairstyle]. Unfortunately, we are still suffering the lingering effects of our enslavement, which seems to have crippled our sense of identity. This manifests itself in the disdain we have for that which characterises our heritage and culture.

Some time ago I remember overhearing a conversation between two men within a particular corporate space. One boldly told the other that his father told him from early that as his child, there are three types of people he should forget about ever becoming: 1) a thief; 2) a homosexual; and 3) a Rasta.

Meanwhile, some who claim to be acquaintances of King have refuted the entire story, alleging she had cut her hair herself. To date, their story has not been given much credence.

As the country awaits the results of investigations on the matter, many were left to wonder whether—in the words of Jamaica's national hero, Marcus Garvey—they are entirely “emancipated from mental slavery”.