France's regional languages, patois, dialects: what was that again?

Some pointers for finding your way through a terminological maze 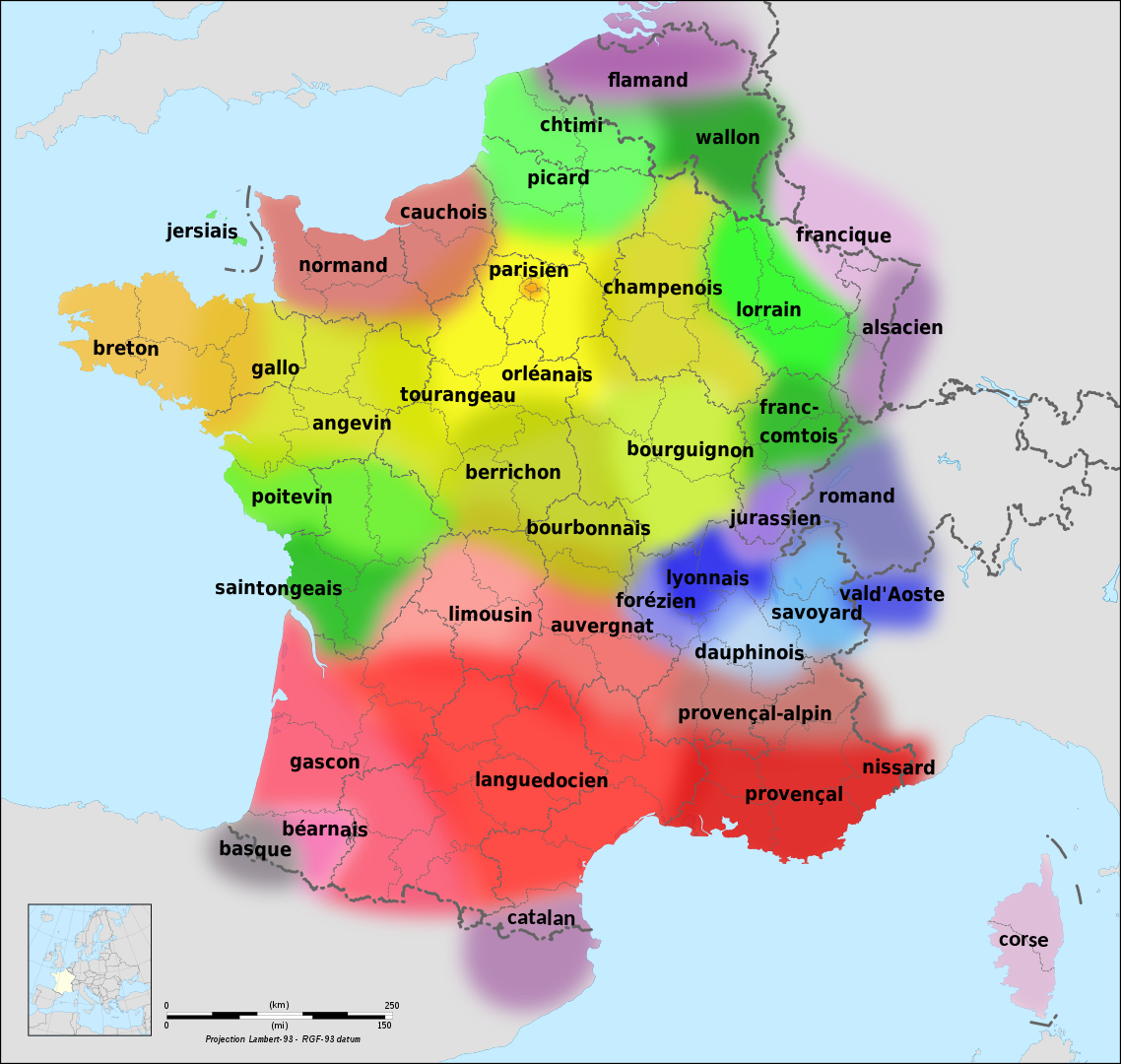 Map of the languages spoken in metropolitan France, showing their approximate respective geographical extents. Visual taken from Lexilogos.com with the authorisation of the author and modified by the Wikipedia user Hellotheworld, under licence CC-BY-SA 3.0.

When it comes to languages, and minority languages in particular, the vocabulary employed often arouses debate due to the political positions of and the state of relations between linguistic communities. In France, some linguistic communities have close to two centuries of struggle behind them in their fight to gain forms of acceptance, which include the designation as “language,” rather than “dialect” or “patois,” terms which still exist in current vocabulary, but tend to have acquired a negative connotation.

France considers French to be the national and official language. However, the linguistic reality is far more complex, with 75 languages that are termed officially as “regional languages”, twenty or so of which are in the territory of European France (the majority of these languages are therefore spoken in its overseas départements (provinces) and regions).

Let's take the example of Gallo, a Romance language from Brittany, in the north-west of the country, whose speakers were estimated to number around 200,000 in a socio-linguistic survey conducted in 2018. A victim of the cliché that it is a deformed version of French and considered a variety with low prestige, Gallo is currently taught in public schools and can be taken as a baccalauréat (school leavers’) examination subject. Along with Breton, it was recognized in 2004 as forming part of the “languages of Brittany, besides the French language” by the Regional Council.

Global Voices’ files on the linguistic situation in France employ the term “regional languages,” following the widest current usage. This description is found for example in legislative texts, like that of the act relating to the protection as heritage and the promotion of regional languages (loi Molac), in the media and also in the discourse of those engaged in the defence and development of these languages, such as the  collective «Pour que vivent nos langues» (“So our languages may live”).

The General Delegation on the French Language and the Languages of France, the body tasked with coordinating language policy at the national level, is proposing a definition of the regional languages of metropolitan France “as languages spoken in a part of the national territory for longer than French has been the common language,” thus placing them in a historical perspective which gives precedence to the longevity of a form of speech's presence as a criterion for legitimacy and accords a central place to French as the language of reference.

The 18th century saw a moment of linguistic consolidation, with a strong will on the part of the authorities to “destroy the patois,” [the term patois here is taken in French context and refers to a form of speech used in a very restricted geographical zone] which were seen as an obstacle to the advancement of the nation. This plan of eradication was set in stone at the end of the 19th century, under the aegis of the minister Jules Ferry, who made education compulsory and forbade the use of languages other than French in school under pain of punishment. The newspaper Le Messager published this exhortation on 24 September 1840:

Destroy, if you can, the ignoble patois of the Limousins, the Périgourdins and the Auvergnats, force them by all means possible into the unity of the French language as into the uniformity of weights and measures, we will give you our full-hearted approval, you will be doing a service to the barbaric populations and to the rest of France which has never been able to understand them.

Inaugurating a timid steer away from the previous highly circumspect policies on multilingualism, perceived as a threat to national unity, the loi Deixonne of 1951 “relating to the teaching of local languages and dialects” concerned only Basque, Breton, Catalan and Occitan. The text made reference to “local forms of speech” and the transmission of “folklore, literature and the popular arts.” The term “dialects” has since been erased from the official vocabulary.

The linguist Henriette Walter defines  regional languages as “languages of different origins (Latin, Germanic, Celtic or of unknown origin, such as Basque), but historically present on French territory, continuously, in well identified geographical localities,” a binding to territory that notably excludes Romani and Yiddish.

Although the researcher also defends the use of the term “patois” to designate a form of speech used in a very restricted geographical zone, and goes on to say that for linguists a patois is a language, this usage has become very much the minority in the scientific community.

The etymology of the word itself goes back, according to John Orr to the Old French verb ‘patoier,’, which meant “to wave one's hands, gesticulate (to make oneself understood, as of deaf mutes),” then “to go about something, to scheme.” A semantic slippage has shifted the meaning of “patois” from gesticulation to behaviour, then uncouth behaviour, before coming to designate a “private language (eg. infant babble, the repertoire of bird calls, a rustic or uncouth speech).” The definition given by Diderot and d'Alembert's Encyclopédie in turn takes up the language/patois opposition, leaning on the idea of a singular purity on the part of French: “Patois. Corrupt speech as is heard in almost all the provinces: each has its own patois […]. The language is spoken only in the capital.”

Thus, the word “patois” is in France freighted with many pejorative connotations, listed by Jean-Pierre Cavaillé in a blog post. He explores in the process the complexity of this concept, showing that “patois” may be made at once the object of deprecation and of a sense of pride for its speakers:

Of course, I tell them what I think of the ideas conventionally attached to the term ‘patois': that it is a sub-language or corrupt French; that there are (or were) as many patois as there are villages; that it is known rather than learnt, that it is not written, that it is different from Occitan; it is up to them whether or not to follow me.

The negative associations of patois overlap strongly with those of “dialect” in current speech. In linguistics, a dialect is quite simply a variety of a language, with no hierarchy being established. This concept is indeed more complex than it seems, as the YouTuber Linguisticae explains in this explanatory video:

Nonetheless, in its current use, “dialect” is the vehicle for an image of a sub-language, associated with a fragmentation that is judged inferior in comparison to the strong standardisation of a dominant language such as French, and with a territorial, social, and even intellectual, limitation. The supposed absence of a written literature in the case of the patois and, to a lesser extent, the dialects is retained as a criterion for belittlement.

The French linguistic context is characterised by a strong attachment to the French language, which has imposed itself over the entirety of the territory by active national unification policies, notably via compulsory education in French. The “language of the Republic” (article 2 of the Constitution, 1992 amendment) is currently in the large majority and dominant. In that sense, the so-called “regional” languages area also minority languages in terms of their number of speakers, and even ‘minoritised’ by the fact of their historical marginalisation.