Some doctors have resigned in protest against the coup 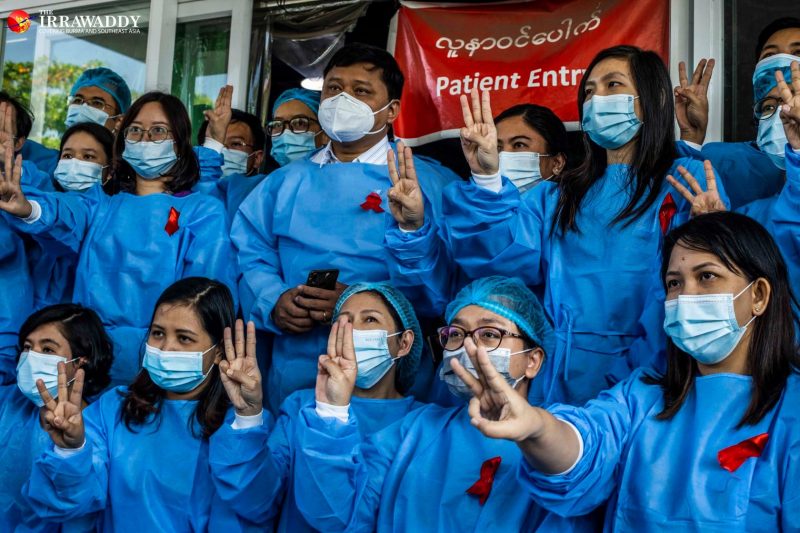 Doctors at Yangon General Hospital’s Emergency Department staged a Red Ribbon Campaign at the hospital to show their solidarity with the ousted National League for Democracy government as part of an ongoing civil disobedience campaign against the military coup. Photo and caption by Htet Wai (The Irrawaddy is a content partner of Global Voices)

Candlelight protests, the banging of metal vessels, honking of car horns, a boycott of military-owned businesses, and the resignation of some medical frontline personnel were among the actions launched by Myanmar citizens to demand the restoration of civilian rule following the military coup on February 1.

The country's military, known locally as the Tatmadaw, seized power, declared a year-long state of emergency, and detained leaders of the National League for Democracy (NLD) which won a second term in office in the November 2020 election. The military said the coup was “inevitable,” citing concerns about supposed election fraud which they claim tainted the credibility of the recent vote. Election officials have disputed these allegations.

Netizens protested against the coup on social media. Many have made their Facebook profiles red, the color of the NLD party, or displayed stickers with the image of Nobel laureate Aung San Suu Kyi, the NLD's iconic leader.

At 6pm on February 2, many residents in the former capital Yangon lit candles as a symbol of resistance against the coup.

And at exactly 8pm, residents of many neighborhoods around Yangon banged loudly on metal vessels in protest, as shown in the video below.

During the protests people chanted “Downfall to the military dictatorship” and “May ‘Amay (mother) Su (Aung San Suu Kyi)’ be well”.

Yangon is banging devils out.
People in downtown Yangon banging pots and honking to against the coup. #Myanmarcoup pic.twitter.com/j2fSl5PxYn

The pot-banging protest has been labelled the Than Pone Tee Campaign. One protester told Global Voices the meaning of the term:

Nay Phone Latt, an activist and former member of parliament, was inspired by the peaceful protests:

Meanwhile, medical associations and hospitals across the country have been releasing statements asking doctors to engage in civil disobedience by not going to work starting on February 3.

Some medical officers have sent in their resignation letters:

“We had a government that we elected. We cannot allow the military to form a government,” said a doctor and lecturer at the University of Medicine 2 in Yangonhttps://t.co/InNfVfD2Qw

The Justice for Myanmar organization has also asked people to boycott the military-owned telecom service provider MyTel, and other businesses with military affiliations. The boycott has been gaining traction on the ground.

Myanmar was ruled by a military junta for several decades, until a democratic transition led to the formation of a civilian government in 2010. The military-backed Union Solidarity and Development Party (USDP), lost the 2015 general election to the NLD, but the 2008 constitution drafted by the military guarantees that certain positions in the cabinet and parliament be reserved for the military appointees.