Trinh Ba Phuong shared his story in his own words, shortly before he was arrested 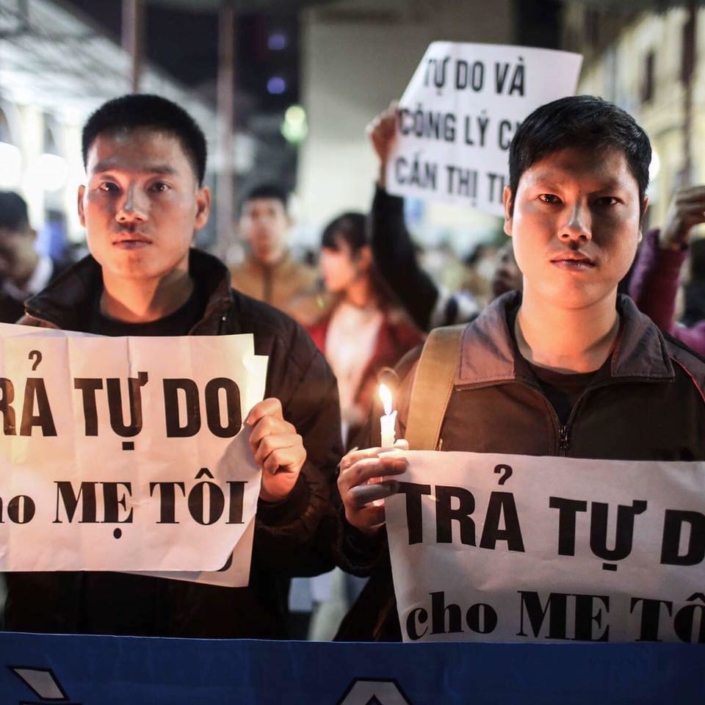 This interview with land rights activist Trinh Ba Phuong was conducted shortly before his June 2020 arrest. This intimate video covers a variety of topics, ranging from his background to his relationship with his wife – “She’s very caring. And she doesn’t know how to lie,” he jokes – to his dreams and aspirations for Vietnam.

Phuong is a charismatic and family-oriented person. “I think I’m pretty easy going, not the picky type,” he says when asked to describe himself. Even the public security officer who has been assigned to follow him for years says he’s a nice guy, he jokes when talking to the interviewer. In response to the question “What are your dreams?”, Phuong grins and responds: “I’m just an ordinary person.” He longs for health for his family and a stable job working with his hands.

His parents, Can Thi Theu and Trinh Ba Khiem, as well as his brother, Trinh Ba Tu, are all activists. In the video, Phuong explains how his parents’ arrests in 2014 launched him into the world of activism. His goals revolve around justice for wronged communities like Duong Noi District, an area located in Hanoi, where he is from, and Dong Tam Commune, also part of the extended boundaries of Hanoi. “Ever since my parents were wrongly jailed, and our villagers were suppressed and had their land stolen, I wanted to help them get their property back,” he explains. Phuong was 19 when his parents were first arrested.

In recent years, Phuong has been harassed and surveilled by public security agents, especially so after he tried to publicly share news about the early-morning police raid in Dong Tam Commune in January 2020. The raid left Le Dinh Kinh, a local land rights leader, and three police officers dead. On June 24, authorities surrounded and stormed Phuong’s home and arrested him; Theu, his mother, was also later arrested at a different residence, as well as his brother Tu. They were charged under Article 117 of the 2015 Criminal Code for “propaganda against the state.” All three remain in pre-trial detention at the time this video is released.

This interview paints a deeper picture of Phuong than what observers may see through bits of his social media posts, state media articles, and the rare international news piece, and allows Phuong to tell his story in his own words.

The 88 Project aims to showcase the multi-faceted lives of activists in order to press for their release and pass on their wisdom to a larger audience. We hope that viewers will understand the critical societal and personal reasons why Phuong and other political prisoners should be freed.

In 2008, the authorities released an announcement on land acquisition in Duong Noi Village and the compensation payment, which was extremely low. There were 356 households who refused the compensation and together participated in a prolonged protest. In 2014, Phuong’s parents were both arrested and sentenced to 18 and 15 months in prison, respectively while filming land-grabbing by the government. His mother was again arrested in 2016.

In February 2018, Phuong was put under surveillance during the Lunar New Year. In early October 2019, he was prevented from leaving home on China’s National Day, a period of enhanced surveillance as protestors often gather at that time to protest against China's claim in the South China Sea. Phuong was one of the most fervent supporters of the Dong Tam villagers after the raid on their village in January 2020.

He met with US Embassy officials in February to discuss the incident. While meeting with them, he also shared a handwritten letter from Le Dinh Kinh’s wife, Du Thi Thanh, with personal testimony. Phuong and Thanh both called for an independent investigation into the raid and the application of measures similar to sanctions that are currently part of the Global Magnitsky Act on Vietnamese government officials involved in the planning of the attack.