‘I want to represent albinos and send across positive messages’ 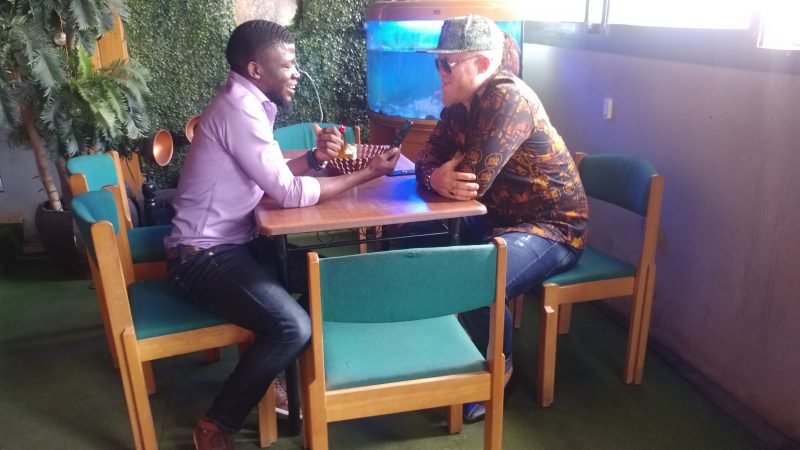 Mola Mongombe (right) expresses concern for the treatment of people with albinism in Cameroon and also discusses his work as a cultural music promoter, in Buea, Cameroon, July 16, 2020, photo by the author, used with permission.

Musicians with albinism in Cameroon have brushed aside social stigma to actively participate in the country’s vibrant arts and culture.

Albinism is a congenital condition in which a person is born without pigment in their skin, hair and eyes. Those born with albinism in Cameroon often live with discrimination and misunderstanding about their condition.

Now, people with albinism are turning to music to convey powerful messages that encourage citizens to resist community pressures to discriminate against albinos.

Ntungwa Njomo Felgani, popularly known as Boy TAG (The Albino Guy) is one of Cameroon’s rising music stars who draws inspiration from the torments he went through as an albino person to produce beautiful songs. 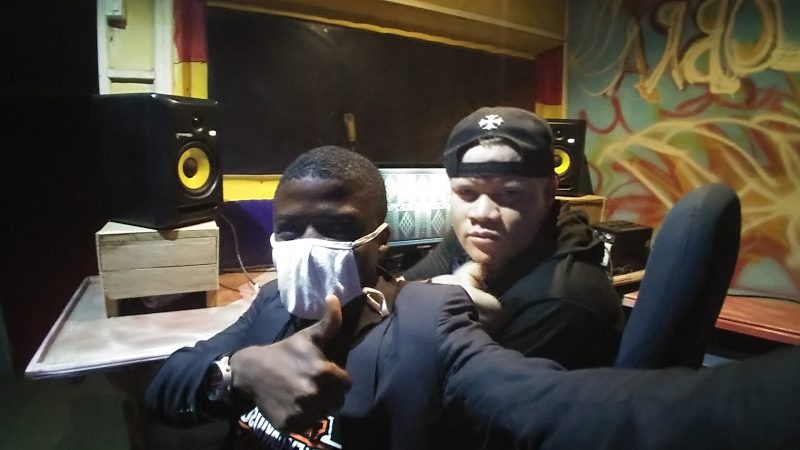 At Boy TAG's recording studio on Campaign Street, Buea, Cameroon, prior to World Albinism Day. Photo by the author, used with permission.

Global Spoke with Boy TAG last month to hear about his motivations:

I chose Boy TAG which means ‘The Albino Guy’ because I want to represent albinos, I had to represent who I am and send across positive messages.” In one of his songs called ‘Mignoncite,’ he encourages people to be proud of who they are. “People should not try to change their colors because they want to be like others — God was not foolish making you that way.

Boy TAG learned this lesson the hard way. As a kid growing up in Muyuka, a town in southwest Cameroon, he faced bullying and insults based on his condition. He continued:

It wasn’t easy for me growing up as an albino. A lot of people insulted me — even mothers sent their children to freely insult me in Muyuka, as if it was my fault. It was really not easy, I felt so much hurt — it really hurt. I could have been going through depression back then without even knowing what depression is.

Mola Mongombe, an albino person who is also a popular music producer, can relate. Mongombe, who works as a promoter, pianist, songwriter, bass player and music teacher, specializes in Njoku jazz, a special sound from Bakweri Land, from his homeland.

Speaking to Global Voices this month, Mongombe explained how Bakweri Land has over 25 variations of music but most people only associate the area with chacha music. “I decided that am going to make people feel that it’s not about the language or a particular dance style but it is about culture, it’s something deeper,” he said.

He says he came up with the Njoku jazz style “to promote everything that has to do with the music from Fako Land … and make people who are non-Bakwerian feel the music.” Mongombe does not always talk directly about his albinism but as a performer, he is sending the message that musicians with albinism can make a mark on the industry.

People with albinism may be the most discriminated and stigmatized group in Africa, and Cameroon, in particular, according to Mimimefoinfos, an online news site.

Despite the beautiful aspirations of Mongombe and other albino musicians in Cameroon, they continue to face the double challenge of making it in the competitive music industry and also dealing with the perpetual stigma associated with albinism.

This stigma stems from deep cultural traditions that consider albinos as “people with mystical powers.” As a result, witch doctors continue to seek out albinos “for their hair, nails and body parts,” seriously threatening their lives.

In some areas of Cameroon, “there is [a] belief that albinos can either be sacrificed to gods or used as a cure for many diseases,” according to state broadcaster CRTV. In the southwest region where Mount Cameroon sometimes erupts, “albinos were thrown alive on the erupting flames as a sacrifice to the ‘angry’ gods of the mountain,” according to the same CRTV report.

Following the special CRTV report, Cameroon’s Ministry of Social Affairs classified albinos under groups of people with special protection needs, under Decree N°2011/408 of December 9, 2011, that fights against social exclusion.

Advancing the arts for all

In addition to this important step to protect albinos, the government also supports local artists through the organization of music festivals that are inclusive to all, including artists with albinism who promote arts and cultural heritage.

Grace Ewang, the southwest regional delegate for arts and culture in the southwest region, said that the Festival des Musiques et des Danses Patrimoniales (FESMUDAP), or Heritage Music and Dances Festival, is thankful for artists who valorize culture and wants to “give artists the red carpet treatment,” during an interview with Global Voices in December 2019.

“We have to work hard to see that [artists] transmit their cultural heritage to the younger ones,” she said, referring to FESMUDAP music training sessions for youth during holiday breaks.

“I want to tell those who are in traditional music that they should not tremble because they are doing the right thing and we are behind them for promoting the culture of the southwest region,” Ewang said.

Musician Mola Mongombe expressed his worries, however, telling Global Voices that his own people from Bakweri Land do not really support his artwork. He stays optimistic knowing that he can count on fans far and wide.