Chinese nationalists call for retaliation measures against US diplomacy

Patriots were disappointed with the choice of Chengdu 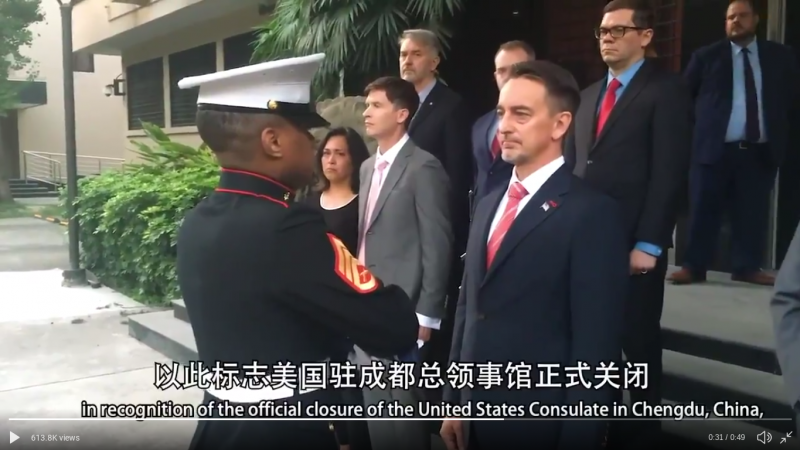 Detachment ritual inside the U.S consulate in Chengdu. Screenshot from the U.S China Embassy's video.

The United States’ abrupt decision to shut down the Chinese consulate in Houston on July 22 shocked China, and in a tit-for-tat expected measure, Beijing announced the closure of the US consulate in Chengdu in Western China two days later.

Chinese nationalists were disappointed with the choice of Chengdu. According to online polls conducted by Global Times and Guancha, news sites affiliated with the Chinese Communist Party (CCP), approximately 70 percent of those who replied would have favored the closure of the US consulate in Hong Kong, and indicate the consulate in Guangzhou as their second most popular choice.

On July 24, after a pro-Beijing group protested outside the US consulate in Hong Kong, Hong Kong Commercial Daily, a pro-Beijing media outlet, tweeted:

The US government announced the closure of the Chinese Consulate in Houston, a decision that has ignited Hong Kong people’s anger. Today, some Hongkongers self-organized an “anti-US hegemony alliance” and rallied in front of the US consulates in Macau and Hong Kong chanting slogans to call for its shutdown. They threw eggs at the portrait of US president Donald Trump and State Secretary Mike Pompeo. They turned on a “air attack” siren calling for the US to get out of Hong Kong.

At the same time, the CCP-affiliated Hong Kong Federation of Trade Unions launched an online petition to urge for the closure of the United States’ Hong Kong and Macau consulates. The statement said:

The unreasonable demand to close the Chinese Consulate in Houston is a new wave of assault launched by the US to interfere with China’s domestic affairs and to harm the US-China relation. It is reasonable for our country to adopt counter measures of equal range to protect our country’s sovereignty and dignity.
The Hong Kong Federation of Trade Unions calls for the US consulates in Macau and Hong Kong to have their operations suspended, as they serve as bases for political instability — in order to restore peace in Hong Kong.

Firecrackers outside the US Consulate in Chengdu

In mainland China, the state-owned Chinese Central Television (CCTV) set up live cameras outside the Chengdu Consulate. Police and a fire engine were also standing by, ready to react to a much anticipated “document burning scene,” as many online patriots were expecting to see something similar to what had happened in the Chinese Consulate in Houston.

But there was no such scene. Instead, one netizen suggested to turn the building into a hot pot restaurant — an idea that was widely supported with more than 240,000 thumbs-up signs on the comment thread of the CCTV live cast.

Soon after the Chinese Foreign Affairs Ministry notified the US on its decision to close the Chengdu Consulate on July 24, CCTV set up multiple cameras outside the US Consulate in Chengdu. Its live-cast attracted more than 20 million views by 3pm. In the comment thread, Chinese netizens left comment such as “this is a great move!” “Such a hardcore scene!”, “The shop is for sale, I have figured out the name of the new hot pot restaurant!”, “5G is so powerful and we can live-cast anything that we want!”

On the scene, impatient onlookers decided to light firecrackers to create smoke instead, as Netizen @M8MI8 reported on Twitter:

Fellow from Chengdu lighted firecrackers outside the US consulate to celebrate its shut down.

In sharp contrast with the forced eviction scene in Houston after a 72-hour shutdown notice, the diplomats left the Chengdu consulate on July 27 with a detachment ritual, as shown in a video posted by the US-China Embassy Twitter account:

Today, with pride in our work and memories of friendship from people in the southwestern region of China, we will begin our work in a new position.

While the Chinese government has attempted to de-escalate the tension by letting go a Chinese scientist with a military background who allegedly had been hiding inside the Chinese consulate in San Francisco upon an FBI investigation, nationalist circles in China are now talking about a nuke race on Weibo, the Chinese social media platform.

Hu Xijin, the chief editor of Global Times suggested in his Weibo post on July 26 that China needs to build more nuclear missiles:

The key to constraint the arrogant attitude within the security framework is to strengthen the power of Chinese nuclear missiles. Other methods are not effective.
Of course, China will not give up on negotiations with the US to solve problems, we are consistent in our attitude on the China-US diplomatic relations. But we are not the trouble maker, the US has kept charging and we can’t exclude the possibility that something may trigger a war between the two countries in the South China Sea or around the Taiwan strait. The situation would quickly turn into a contest of will power between two countries, and nuclear power would then be the pillar to establish the will of China.

Hu's comment has attracted a large number of positive reactions and thumbs-up on Weibo.