As COVID-19 accelerates digital transformation, is the internet safe for women in the Middle East? 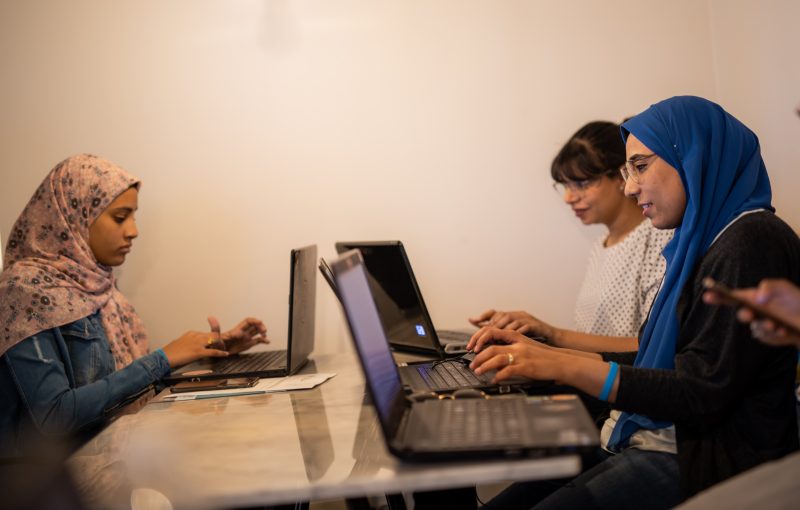 The COVID-19 pandemic has forced countries into lockdown and quarantine. Trapped at home, many people have turned en masse to the internet to continue their daily routines from shopping, working, and learning to communicating and socializing. It’s likely that it will have a lasting impact well after the pandemic ends.

However, offline gender norms and violence are amplified online, which means that women are less likely to benefit from this digital transformation as much as men. In the Middle East and North Africa (MENA) region, online abuse and harassment have been forcing some women to self-censor and disengage from public discourse.

The internet is a double-edged sword. The online world is a reflection of offline realities. New technologies replicate limited environments that women navigate offline. Virtual spaces extend and perpetuate offline inequalities in terms of power dynamics and patriarchal gender norms.

Online abuse that targeted women increased in March 2020 during confinement by 50 percent similar to the surge in domestic violence, according to the office of the eSafety Commissioner in Australia.

Forms of violence against women online

In conservative societies where women bear the burden of so-called family honor, the image of a woman made public can have devastating consequences. In Yemen, women fear retribution by their families and therefore rarely show themselves on social media.

There is a strict segregation of sex and men should not see women’s appearance. Women don’t usually post their photos online. If a woman shares intimate photographs in a private conversation — which can be something as mild as a picture showing her face without the full traditional black cover — there is a risk that someone will use it to bully or blackmail her. If known it could ruin her reputation and bring shame to her entire family.

Women activists and journalists are particularly targeted online in attempts to intimidate, sow disinformation and discredit their work.

Recently, Tawakkol Karman, a prominent Yemeni human rights activist and Nobel Peace Prize laureate, said that she was subjected to what she described as “widespread bullying” and a “smear campaign.” The campaign, led by media affiliated with the Saudi government and its supporters on social media, targeted Karman after she was nominated to the Facebook Oversight Board, established by the company to take content moderations for two of its platforms — Facebook and Instagram.

[Thread]1/ This one is on the campaign “Facebook Caliphate”, which is a mostly Saudi-led protest against @TawakkolKarman . What was striking about the hashtag is the number of clearly suspicious accounts tweeting on it. Read on for more #disinformation

According to a global survey conducted in 2018 by International Women’s Media Foundation and Troll-Busters.com, “online attacks have become more visible and coordinated in the past five years, particularly with the rise of nationalism around the world and the use of digital networks to thwart political processes.” The survey concluded that “physical, sexual and online abuse is a part of women journalists’ daily work”:

Online attacks against journalists have become more sophisticated in nature, more insidious in their damage to the news enterprise and more dangerous for journalists, both online and offline.

As a result of a hostile online environment, women often self-censor and even withdraw from public discourse. The United Nation’s Human Rights Council identified widespread online violence against women as a significant reason for the global digital divide between men and women.

In Amnesty’s study, a vast majority of women said that they were apprehensive about using the internet after being targeted. Some closed their social media accounts, while others refrained from sharing specific kinds of content.

Palestinian women have also complained about the “surveillance tower” — familial and social surveillance that monitors and intervenes in online activities and interactions, which results in increased pressure to self-censor.

“Having your parents on Facebook has its effects. You start rethinking the posts you want to write, or photos you want to share, or people you want to connect with,” said Susan, a Palestinian woman from the West Bank in a 2017 report on online gender-based violence conducted by the Arab Center for the Development of Social Media, 7amleh and the Swedish Kvinna Foundation.

As with domestic violence, the true extent of online violence against women is often untold and underreported.

A 2019 Moroccan study revealed that only one out of 10 women reported online gender-based violence to the authorities.

Even though cyber violence has been recognized by the United Nations as “just as damaging to women as physical violence,” the phenomenon in the MENA region is still largely unrecognized and overlooked, despite the adoption of a number of laws that criminalize cybercrime and online harassment in the past few years.

Women’s rights advocates say those laws often fall short of what is needed to protect women online. The Sisterhood Is Global Institute, a Jordanian women’s rights organization, said not enough women are aware of the new law and thus are still not reporting harassment.

In another example, despite Tunisia passing a law on the elimination of all forms of violence against women, prosecutions for online abuse and harassment against women remain rare. Although in an unprecedented ruling, on May 8, a Tunisian court pronounced a restraining order in favor of victims harassed online before stalking begins offline.

In general, civil society lacks awareness and capacity in terms of what exactly constitutes cybercrime and related rights. As women’s rights groups in the region focus on advocacy efforts on pressing issues affecting women offline, they may not be left with enough resources for safeguarding those rights online. Social norms can also prevent women from speaking out.

In addition, there is often a lack of knowledge of technology among legal and law enforcement professionals. Police tend to trivialize online violence and abuse against women.

In the study by 7amleh and the Swedish Kvinna Foundation on online gender-based violence in Palestine, more than half of the women surveyed said they are afraid to speak up and do not trust the police to handle online abuse cases. Instead, many said they dealt with the issue within personal circles.

Online violence restricts freedom of expression, self-development, economic empowerment, civic and political participation. In an era where the internet is an increasingly critical space to exercise fundamental human rights, more needs to be done to ensure women's safe participation.