‘I and we': The rallying cry of Russian protests

What can the symbol's success teach us about the fortunes of the Russian opposition? 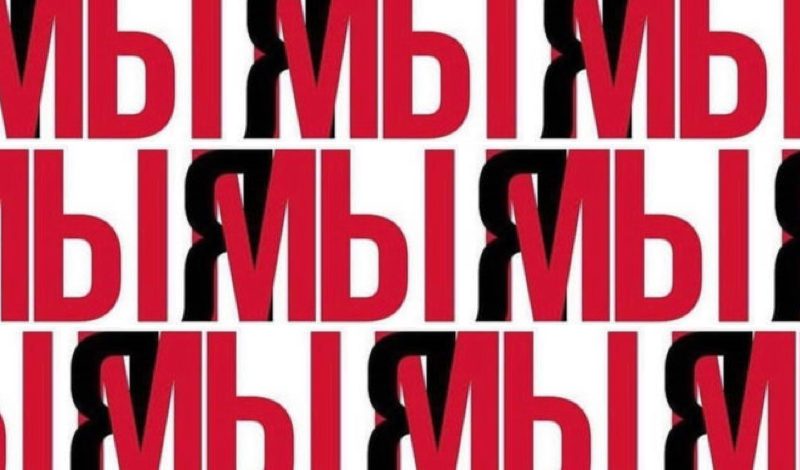 Collage of the Russian words “I” and “We”. Image by GlobalVoices.

On June 10, Kommersant, RBK, and Vedomosti, three of Russia's most respected newspapers, made headlines with, well, their headlines.

That morning, all three ran the same front page—a simple white background with just four words: Я/Мы Иван Голунов (I am/We are Ivan Golunov). The striking image of the front pages side by side garnered international media attention. The day before, Golunov, a journalist for the independent Russian news outlet Meduza, had been arrested on trumped-up drug charges widely believed to be motivated by his persistent investigation of corruption and organized crime in Moscow.

Almost immediately after the tripartite show of solidarity, the eye-catching phrase and format became ubiquitous both online and offline. Indeed, during a Kremlin awards ceremony, the daughter of one of the attendees sported a T-shirt bearing the words.

Much has happened since: Golunov has been released, Russia has seen nationwide regional elections. Protests over the barring of opposition candidates have given rise to a new spate of political trials, the most reported of which being the case of budding actor Pavel Ustinov, who was charged with supposedly assaulting a police officer.

Time may have passed but the significance of the original slogan has not. The Я/Мы formula has been applied to a multitude of other cases of political repression, including those of people detained during protests in Moscow such as Ustinov and Kirill Zhukov. It has even been used to express solidarity with the Siberian shaman Alexander Gabyshev who, on 20 September, was arrested on his walk from Yakutia to Moscow, where he intended to “banish” Putin from the Kremlin. It has been used to express solidarity with the imprisoned Dagestani journalist Abdulmumin Gadzhiyev, and to mourn the self-immolation of the Udmurt professor Albert Razin.

The trope has also been deployed in more general contexts in the form of the phrases “Я/Мы Вся Страна” (We are the whole country),“А Как Же Все Остальные?” (What about the rest?—a reference to Russia’s many other political prisoners besides Golunov); and—in an inversion of the phrase—“Я/Мы не средневековье” (I am / We are not the Middle Ages – in reference to the authorities’ draconian repression of protestors). On 23 September, massively missing the mark, ЖКХ, the Moscow municipal authorities’ department for heating, water, and electricity, posted their own version: Я/Мы Отопление (I am / We are heating).

The Я/Мы saga raises two questions. Firstly, why did the trope become so popular? Secondly, what is the broader significance of this popularity?

We could also ask: why write an entire article about two words?

The answer is that these two words and their now iconic formatting are a significant addition to the repertoire, to use an somewhat academic term, of Russian protest. “Repertoire” simply refers to the techniques and forms that protesters have used in the past; a toolkit that, every time a new cause arises, can provide useful instruments. Would a sit-in or a picket be the most effective way to communicate our grievance?  What about a hunger strike?

Clearly, the Я/Мы formula does not have the amplitude of a rally, but it is, nonetheless, a ‘tool’ that Russian protesters have chosen several times to express their grievances. With each new use, its position in the opposition repertoire becomes stronger. Obvious Western equivalents would be #MeToo (the hashtag that soared to prominence in the wake of the Harvey Weinstein sexual harassment scandal), and #JeSuisCharlie (used to express solidarity after the terrorist attack on French satirical publication Charlie Hebdo). The creator of Я/Мы—Strelka Institute’s Nastya Vishnyakova—explicitly stated that she was heavily influenced by these examples.

In protest, form is often just as important as content. “We decided to use a neat and simple design” that would be “instantaneously understood,” Vishnyakova said in a 13 July interview with business website VC.ru. This simplicity greatly helped the diffusion of the Я/Мы formula, debuting on the front pages of Russia’s most well-known newspapers. Vishnyakova added that Meduza quickly capitalized on this by making the symbol digitally available in multiple formats that could be printed on protest placards, clothing, and social media.

Formulas such as #MeToo and #JeSuisCharlie gained immense traction because they offered a common language through which a multitude of individuals with diverse experiences could speak with a united voice. Я/Мы has a similar resonance, facilitating the expression of a wide range of issues that all ultimately boil down to a profound dissatisfaction with Russia’s political system.

An important observation is that the formula is simultaneously home-grown and indicative of a new receptiveness to international repertoires. Since 2011-12, the Russian authorities have increasingly used allegations of foreign (i.e. western) influence to discredit opposition movements. Protesters have been careful to avoid referencing or employing techniques that would make them vulnerable to these accusations. Я/Мы indicates a growing political confidence in Russian society—protesters are no longer so afraid that the authorities can discredit them in the usual manner.

The aesthetic of the Я/Мы formula also indicates a clear understanding of that “form is as important as content.” The last phrase that gained comparable traction in Russian protests was opposition politician Alexei Navalny’s famous labeling of the ruling party, United Russia, a “party of crooks and thieves”. While Navalny's coinage gained substantial traction (it remains a common chant during protest rallies), Я/Мы has arguably created a bigger splash because, unlike its predecessor, its striking visual dimension can be reproduced in any medium.

Mentioning Navalny leads us to the final, and crucial, point: Я/Мы is distinctly non-partisan. Because of his unabashed opposition to Putin, and his affiliation with the Moscow liberal and creative classes, Navalny has become a divisive political figure: many protest movements (such as those at the beginning of 2018 against the mismanagement of landfills) now seek to distance themselves from him to retain their legitimacy. More broadly, Russia's opposition is notoriously fractious, with left-wing, liberal, right-wing, and self-proclaimed non-ideological groups often refusing to work with one another. The fact that Я/Мы is not the product of any particular political grouping or ideology is more important than one might think; it provides a relatively neutral rallying cry around which citizens of all political persuasions can unite.

So does Я/Мы herald the launch of a new and sweeping revolution? Almost certainly not. But it does mark an undeniable turning point in the repertoire of the Russian opposition, and how they articulate the relationship between state and society.

Perhaps, in future, the fractured Russian opposition will become a little less Я and a little more Мы.