Alexander Gabyshev expects to reach the Kremlin by 2021 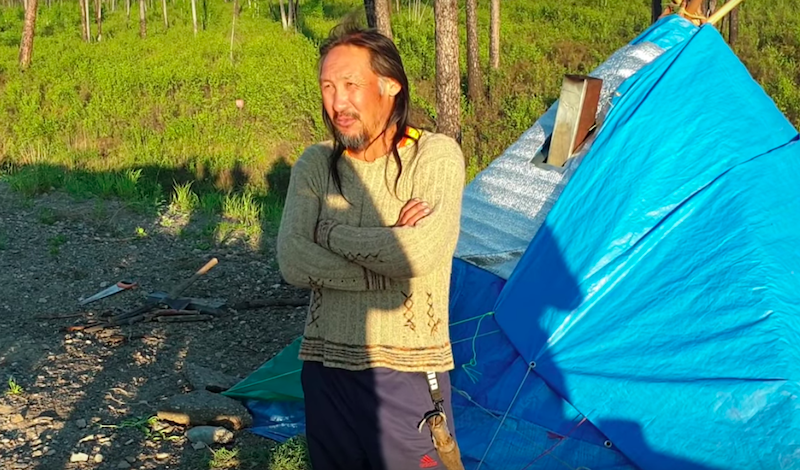 A shaman is walking from Siberia to Moscow, in an eccentric bid to banish the Russian President Vladimir Putin from power.

Alexander Gabyshev left Yakutsk, capital of the vast Sakha Republic, on 6 March this year. The 51-year old ethnic Yakut shaman calls his quest divinely ordained, and insists that Putin is a manifestation of dark forces which must be banished to save Russia from ruin. God has one condition: Gabyshev has to reach Moscow on foot, which should allow him to muster the strength needed for the final showdown.

Gabyshev expects to reach Moscow in 2021, as the Russian capital is over 4,800 kilometres away from Yakutsk. Although Gabyshev hopes to gather companions over the course of his journey, only his dog and a friend who is chronicling the journey are permanently by his side.

These chronicles, which take the form of short video addresses from roadside campsites and short exchanges with passing drivers and long-distance truckers, have won Gabyshev a huge following in Russia. They are the reason bloggers and journalists have started to join the shaman for spells of a few kilometres to hear his forceful opinions on the state of the country. Hundreds of other viewers have turned out along the way to offer Gabyshev moral and material support. He has also become more amenable to those offers, occasionally staying in locals’ homes along the way.

Gabyshev’s odyssey comes at a tense moment for Russia. In Moscow, thousands continue to protest against the electoral commission’s refusal to register independent opposition candidates for upcoming local elections. Popular anger is simmering over many more socio-economic issues, from the rising of the state pension age to wildfires in Siberia and pollution in Russia’s North. It is no surprise that some Russians wish that Gabyshev would hurry up and complete his mission.

The Russian nation only has two loyal allies left: the expression “go to hell” and the Yakut shaman Sanya [diminutive for Alexander].

Gabyshev’s adventures and musings can now be followed on several YouTube channels, several pages on VKontakte, a popular Russian social media network, and at least one unofficial Twitter account (@putshamana) dedicated to the shaman.

Gabyshev’s speeches may tend to the theatrical (in one video from 20 August, he stated that Christ was also a “warrior shaman” and that “Putin is a beast, one shouldn’t negotiate with beasts”), but they are not simply the ravings of a fanatic. Rather, they are pieces of political commentary which deeply resonate with Russians concerned for the future of their country. Comments beneath Gabyshev’s videos and discussions about them on social media tend to be warm and supportive.

Gabyshev’s “delusional scenario” has a relatable and “clear political logic,” wrote the musician Artemy Troitsky in a column for independent newspaper Novaya Gazeta on 28 July. Troitsky juxtaposed the shaman’s earthy spirituality with the ostentatious churchgoing of Russia’s politicians, noting that “Putin’s entourage always sticks out on [Orthodox Christian holy site] Mount Athos and heads to Bari in private jets to see the relics of St Nicholas the miracle maker.” 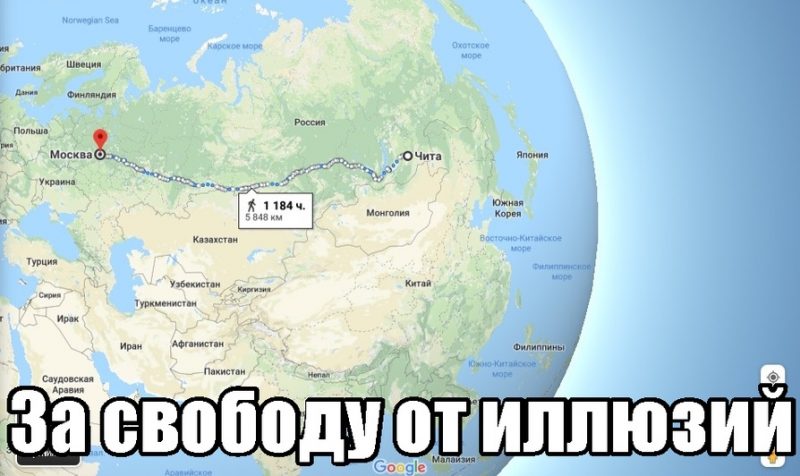 “For freedom from illusions,” reads this image depicting Gabyshev’s long journey to Moscow. From the VKontakte group “Путь Шамана”

Accordingly, as the shaman has gained more sympathisers, he has become something of an opposition politician. When Gabyshev reached the city of Chita, he addressed a crowd of over 300 people on the city’s Ploshchad Truda (Labour Square) on 12 July. He told supporters and curious onlookers to “live freely” and “not take orders from Putin,” declaring that “popular assemblies” must be the source of power in Russia.

While he hopes to overthrow the authorities by force of numbers and divine intercession, Gabyshev openly wondered whether times ahead might call for less peaceful methods.

Curiously, the local authorities in Chita gave permission for Gabyshev’s fiery rally. Russian law demands that protesters request permission for rallies in advance; this was done on the shaman’s behalf by local politicians from the Communist Party of the Russian Federation (KPRF) and the popular Chita-based vlogger Alexey Zakruzhny, more widely known as Lyokha Kochegar. Nevertheless, the rally in Chita was fiercely opposed by local clerics of the Russian Orthodox Church, who according to local news site Chita.ru denounced it as a “provocation” and speculated about Gabyshev’s mental health.

The shaman’s rally was risky; others in Russia can, and have, been charged with “extremism” or “disrespect to the authorities” for making such statements, particularly online. While Gabyshev has not yet faced any legal repercussions for his activism, Lyokha Kochegar was less lucky. On 16 July, the vlogger was charged by police with violating the conditions of holding a rally: he allegedly announced the event before it had officially received permission from the authorities.

After the rally, Gabyshev took to the road again. On 18 August, he reached the border between the Zabaykalsky Krai, of which Chita is the regional capital, and the Republic of Buryatia. In coming months, the shaman’s route will take him to bigger cities such as Irkutsk and Ulan-Ude. With the promise of even greater crowds, it remains to be seen whether the authorities will prove as indulgent.

Ultimately, Gabyshev may have an unlikely ally in the Russian constitution. Putin is nearing the end of a second consecutive term as president, making him ineligible to run as a candidate in the 2024 presidential election. Speculation is rife as to what tricks the longtime president may have to remain in office, or even whether he will need to in order to retain power. In any case, it is highly likely that Putin will still be present in the Kremlin when Gabyshev reaches its gates.

And what awaits the shaman then?

Badma Biurchiev, a journalist from Kalmykia, a region of southern Russia, sketched out the following scenario:

Russia. 2022. The Yakut shaman has finally made it to central Russia. Over this time he has achieved great popularity. To this day, he sleeps beneath the open skies, but nowadays he has his own guard. During his stops along the way, his supporters set up posts around the perimeter. You can now only get an audience with the shaman by appointment. In Moscow, he already has an office where the queue is recorded and books about the shaman are being prepared for publication. The shaman’s doctrine, however, are strictly transferred by mouth only.

November 2022. Putin has disappeared again. And this time, his absence dragged on. Rumours surfaced that he had attempted to get an audience with the shaman out of turn and that the latter had refused.

December 2022. Rumours about Putin’s contacts with the shaman have been confirmed. A famous blogger was able to photograph the two old men meeting in the forest. Judging by the grainy shots, Putin kissed the shaman’s hand.

31 December 2022. Putin’s farewell speech to the Russian people is broadcast on television. It ends with the words “I’m tired, I’m leaving.”