The oligarchs are the main disinformation proxies in Bulgaria, says local expert 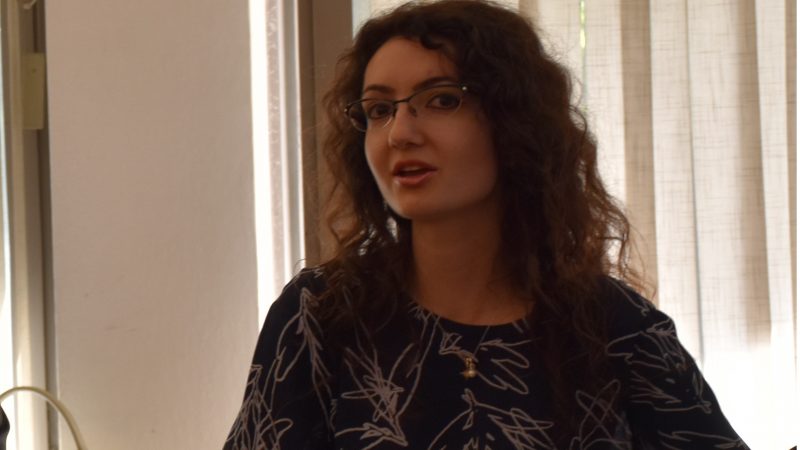 Dr. Rumena Filipova. Photo by Center for the Study of Democracy – Sofia, used with permission.

Filipova currently works as a Research Fellow of the Bulgarian Center for the Study of Democracy, an interdisciplinary organization committed to the study of democracy and market economy.

In addition to a lot of other projects and publications, Dr. Rumena Filipova, along with her colleague Dr. Todor Galev is the author of the report “Russian Influence in the Media, Sectors of the Black Sea Countries: Options, Narratives and Policy Options for Building Resilience“, which examines the disinformation and misinformation as part of Russia’s overall strategy, as well as their transmission of propaganda through the media in the Balkan Black Sea countries.

Meta.mk: You have worked for a long time on the study of the Russian influence and the foreign policy “maneuvers” of Russia and in the report that you have produced together with your colleague Galev you have analyzed the media war it wages. What are your main findings on the spread of the Russian narrative in the Balkan Black Sea countries?

Rumena Filipova (RF): The study examined the dissemination of Russia’s propagandist narratives in Bulgaria, Ukraine, Georgia, Armenia and Moldova between 2015 and 2017 with a specific reference to three prominent topics of Kremlin disinformation, including the war in Syria, large-scale energy projects and elections meddling. The main finding, which emerged, is that the patterns of ownership, economic dependency and (in)formal political links of media outlets in the countries under investigation to pro-Russian groups and interests are reflected into corresponding trends of employing Russia-originating propaganda narratives. That is, as a general rule, the greater the political-economic enmeshment of a news outlet with Russian interests, the more congruously and undeviatingly the content of Russian narratives is matched, the less analytical variation and nationally-originating perspectives are included and the more explicitly biased the style of communication is. Of course, the distinctive features of the national media landscapes in each of the 5 countries further reinforce or constrain Russian propaganda, framing specific discourses on Russia-related developments.

Meta.mk: Have you identified the most tenacious media proxies of the Russian narrative?

RF: The results of the study have shown that the most tenacious – and indeed insidious, proxies that promote Russian narratives are local oligarchic figures and networks, who are financially and politically related to Russia. These oligarchic proxies (formally or informally) control the editorial policy and ownership structures of influential national media. In addition, the cultivation of a larger community of content creators and providers loyal to or dependent on the Kremlin (such as small and medium-sized online news platforms, journalists, bloggers, social-media opinion-makers) ensure the reinforced dissemination of Russian messages. Clearly, the media directly owned by the Russian government or rebroadcasting or reprinting content from them are the staunchest propaganda channels.

Meta.mk: What is the situation, according to your observations, with the Bulgarian media/Bulgarian language media in this regard?

RF: Bulgaria’s general media landscape has undergone significant transformations, particularly in the 2010s, characterized by the decline of print media, the rise of online media, plummeting journalistic standards and changing media ownership patterns. As regards the latter, the combined consequences of digitization and the 2008 financial and economic crisis led to the outflow of foreign investors, whose place has been occupied by local oligarchic groups, seizing control of most of Bulgaria’s media companies. Thus, the concentration of media ownership, oligarchic interests and politics combined with state regulation of resources allocated to the media sector and the capturing of independent regulators have exercised a pernicious influence on the content and quality of the Bulgarian media output. Indeed, international indices have demonstrated Bulgaria’s consistent slide in freedom of the press rankings. For instance, Freedom House classifies Bulgaria’s press freedom status in 2017 as partly free on the basis of a score of 42 out of 100 points (with 0 denoting most free, while 100 – least free status). This has been a deterioration compared to a decade ago. Russia has been actively using and perpetuating this decline in media standards, as it implicitly supports its own model at home.

Yet, placed in a comparative perspective, Bulgaria fares better than the four countries of the Black Sea region that we studied. In particular, the weaker presence of an inherited official Russian media impact on Bulgarian media, including the absence of Soviet descended channels, the decline of the Russian language, a very small number of outlets operating in Bulgaria but originating in Russia, provides a bulwark to the extent of dissemination of and receptivity to Russian messages.

RF: The pro-Russian national media propagate narratives that are framed within the conservative Russian discourse extolling the virtues of state sovereignty (in particular as it is related to decisions on Russia-related projects or on disagreements with some EU policies), the traditional family, the advent of a ‘democratic’ multi polar international order and criticizing social, economic and political trends in the West, including liberalism and multiculturalism. A specific topic that is subject to heavy propaganda concerns energy. For instance, a lot of media frenzy focused on the cancellation of South Stream, which was portrayed – along the Kremlin line, as Bulgaria’s fault resulting from toothless submissiveness to the European Commission and against the country’s supposedly true economic interests. It was claimed that Russian politicians and business officials would remain firmly against Bulgarian calls for the revival of South Stream or the extension of Turkish Stream through its territory as a form of punishment for Sofia’s unreliability and weakness. Yet, as we see now, Turkish Stream will pass through Bulgarian territory in a re-named version as Balkan stream.

Meta.mk: Are the Bulgarian media/Bulgarian language media often the source of disinformation and misinformation or maybe they just are the proxies of the politicians, foreign powers or the social networks? What are the media categories with the lead role in this regard – the traditional media or the new online media?

RF: There are indeed websites, whose goal is to make profit by attracting traffic and advertising revenue through their own fabrication of sensationalist stories. Yet, these websites certainly have not had the same impact and external orientation as the fake news troll farm in Veles, for example. So our research focus has been concentrated on the much more significant phenomenon of local oligarchic, foreign power proxies, who control the editorial policy and ownership structures of influential online as well as print media and TV channels. As traditional media has gradually become obsolete, the Balkans now are officially the land of TV and online media.

RF: The most recent initiative on the governmental level has been the establishment of a disinformation unit within the Council of Ministers as part of the Action Plan against Disinformation for coordinated measures by the European Commission and the European Parliament. However, there have not been tangible results from the operation of the unit – it is not clear how many cases of disinformation have been referenced to Brussels and there has not been a high-profile debunking of fake stories. It has been seen as an EU-driven and not Bulgaria-driven process. In fact, many in the country see the government as at best a bystander, and at worse as active promoter, in the process of oligarchization of the media landscape in the country, which has actually enabled propaganda narratives by Russia.

Disinformation is mainly tackled by non-governmental organizations through analytical reports, the deployment of online monitoring tools (showcasing the origin, progress and impact of disinformation activities) and capacity-building events for journalists. Yet, more needs to be done in relation to wider citizen engagement. The general public should be better trained to recognize biased coverage and obtain reliable information through awareness campaigns and media literacy initiatives.

Meta.mk: How much is a North Macedonia present in the Bulgarian media?

RF: We have not made specific research on this issue. But my impression is that the extent to which North Macedonia receives attention in Bulgarian media depends on the political calendar – i.e., with respect to issues that emerge in bilateral relations. Therefore, this coverage tends to be highly politicized and irregular, for example concerning statements by politicians on common historical figures or events, etc.

It is a good sign that for the first time a weekend of dialogue took place in Ohrid earlier this year, where Bulgarian and Macedonian journalists could discuss the prejudices that each country’s media give into when covering events and developments in the other. Hopefully, such initiatives can contribute to a greater understanding of the challenges that each country faces.