What happened after anti-extradition protesters broke into Hong Kong legislature? 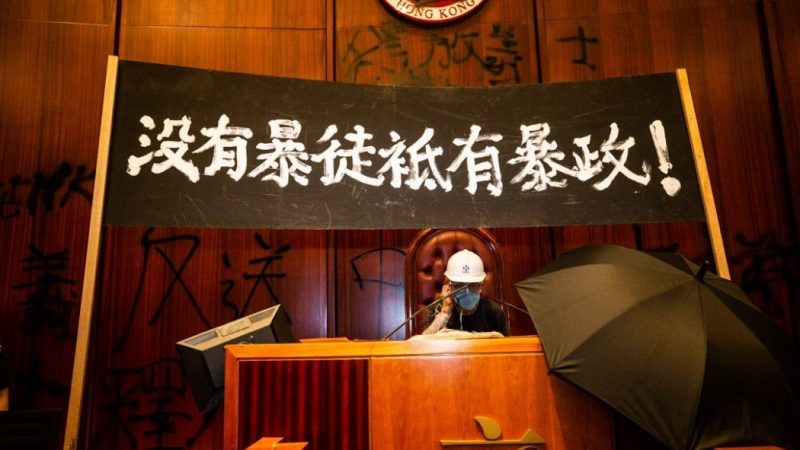 The banner says: There is no rioter but a ruthless government. Photo taken by Todd R. Darling/HKFP

The following post was written by Holmes Chan and originally published by Hong Kong Free Press (HKFP) on July 3 2019. This version is republished on Global Voices under a content partnership agreement.

The anti-extradition protests in Hong Kong took a violent turn on July 1, 2019, as protesters stormed the Legislative Council Complex by smashing the building's exterior glass panels, breaking the metal shutters and forcing the armed police officers from the inside to retreat with a smoke bomb.

Breaking into the legislature

The break-in decision was made in the protest area outside the Legislative Council in the afternoon of July 1 after a brief deliberation among a few hundred protesters. The collective decision was the culmination of a month-long escalation of protests against the extradition bill proposed by the Hong Kong government. Protesters have condemned Chief Executive Carrie Lam for failing to respond to any of their demands.

Around 9 p.m., protesters broke through the final barrier separating them and the interior of the city’s Legislative Council Complex and walked into an empty lobby. Within minutes, protesters began spray-painting slogans onto the corridor walls and vandalising the portraits of Legislative Council presidents. The main legislative chamber on the first floor, a space normally reserved for lawmakers, was broken into and occupied by 9:30 p.m. 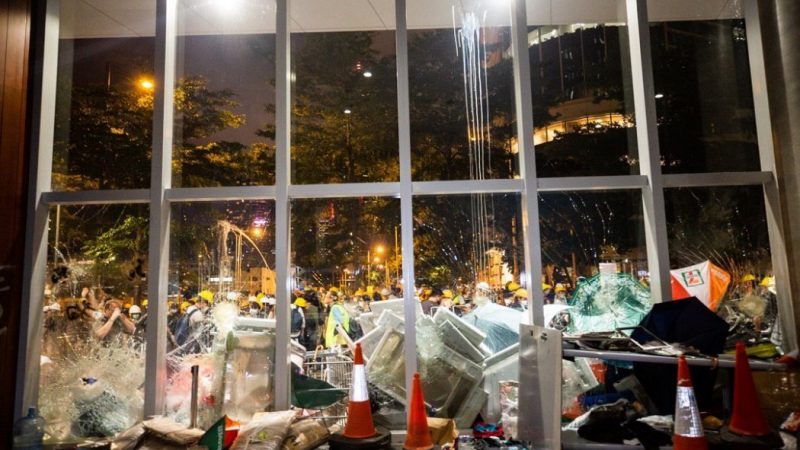 However, the demonstrators who entered the Legislative Council soon realised they were in uncharted waters, and HKFP witnessed the frantic – and at times heated – deliberations between protesters as to what to do next. Above all, they were asking themselves: stay or leave?

The protesters formed small groups in the Legislative Council chamber to discuss their next move. One protester shouted while standing on a table:

Call your comrades to come in here! We are not here to visit or to make ourselves feel good. We will stay for a long time, for long-term resistance… we will establish order, and will each take up our roles.

In a rare move, activist Leung Kai-ping removed his own mask and allowed himself to be photographed:

I took off my mask because I want to let everyone know that we Hongkongers have nothing more to lose.

He urged more people to join the occupation, saying that a larger turnout could guarantee the personal safety of protesters and give legitimacy in the public eye. Leung said:

If we don’t stay here, we will be painted as rioters on television tomorrow. Our faces have all been recorded. If we leave, Hong Kong’s civil society will go backwards ten years and we will never be back here. 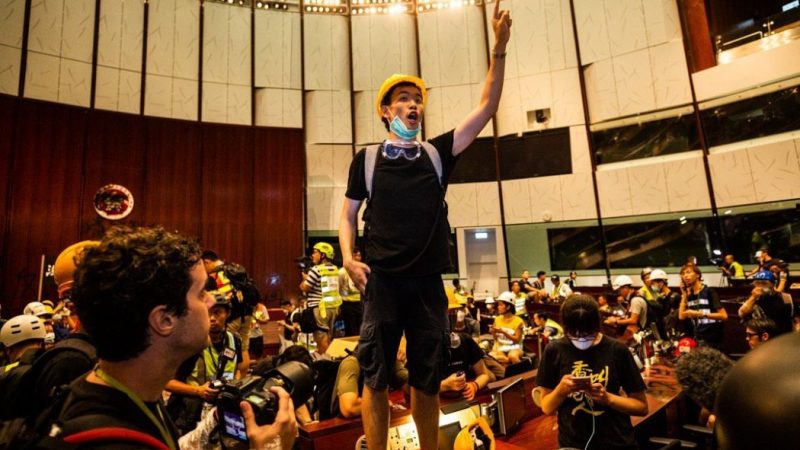 Between 9 p.m. and midnight, protesters took over the lower floors of the Legislative Council Complex, entering the antechamber, meeting rooms and various offices. Some left after hearing rumors that the police were on their way, only to return after finding out the messages were fake.

Despite the extensive graffiti and property damage, some areas were designated as off-limits, such as the documents in the library and the reporters’ room. The glass wall at the front of the library was smashed, but someone later put up a sign saying “no damaging books.” A shelf of antiques in the antechamber was also left untouched, with a sign saying, “don’t damage.”

One protester told reporters that the goal was to “reclaim the people’s legislature” instead of causing random destruction. Without a clear leader, the protesters initially held back from making any statements to the local and international press which had gathered. A few protesters led others in chanting slogans, such as “withdraw the extradition bill” and “Carrie Lam step down.”

Back-up from Telegram channels and LIHKG

In the Telegram channels used by protesters, some said that it should be up to those inside the legislature to decide what statement – if any – to make. Inspiration arrived in the form of crowd-sourced manifestos, which were posted by netizens across social media and especially in the Reddit-like discussion forum LIHKG.

At 10:20 p.m., one LIHKG user posted a widely-circulated statement which began:

We are protesters of the people. We had no other choice, it was not our wish to protest against tyranny with our own bodies, or to occupy the Legislative Council as a bargaining chip for negotiation.

The current administration no longer prioritises the interests of Hongkongers. To make our voices heard by the government, we had no way but to resort to various kinds of occupation and resistance, including the occupation of the Legislative Council today.

An hour after the statement was first published, a version of it was read aloud in the legislative chamber, in front of the podium where the Legislative Council president would sit.

Protesters made five core demands: withdraw the amendments to the extradition laws completely, do not classify past demonstrations as riots, drop all charges against those arrested in relation to the protests, set up an independent commission to investigate the use of force by the police, and call for fully democratic elections for the Legislative Council and the chief executive.

Various slogans had been spray-painted onto the podium at the front of the legislative chamber, and the emblem of Hong Kong had been defaced. One of the lesser-noticed slogans painted on a side panel said, “Sunflower HK.”

In 2014, anti-China activists in Taiwan occupied the main chamber of the legislature for three weeks, in what was later called the Sunflower Movement. Around 200 people were involved, and they were acquitted in court last year because judges ruled that the protest actions were “an expression of democracy.”

Those behind the July 1 occupation may have aspired to create Hong Kong’s equivalent of the Taiwanese movement – but that was not to be.

At 10:21 p.m., the police issued a video saying they would clear the area surrounding the Legislative Council “shortly,” a move that spurred protesters into debating their options for the next hour. Only about 20 were left in the legislative chamber, vastly outnumbered by reporters who were in yellow vests.

Protesters arrived at a consensus that people need to make a decision for themselves before midnight: those who wanted to leave should leave before then, and those who remained would be committed to staying for the long haul.

In theory, each protester could choose their level of participation, but this strategy quickly ran into a problem. Only a minority of people wanted to continue occupying the legislative chamber, but they would become vulnerable if everybody else left.

Protesters clear out of the Legislative Council chamber as police deploy tear gas against crowds on Lung Wo Avenue next to the complex.

As their numbers dwindled in the chamber, one man made an emotional plea with a megaphone outside the legislature:

Some of us have decided to stay here to the last moment. So I call on everyone in Admiralty to do all they can to protect them… we can’t go home and watch their sacrifice from afar.

Minutes from midnight, one of the four final remaining occupiers told Apple Daily that he expected to “go to jail for eight or 10 years, and getting injured all over.” He said that he did not blame his fellow protesters for leaving, though he added that he depended on those staying downstairs in the protest zone for support. He said:

From June 9 till now, we have done so much, should we just let the movement cool down? Go home to sleep and declare the movement over?

The man said he was a 24-year-old father, and urged his children to reflect on what he did:

You can see what your father did, and see what it means to you… I can’t say if it’s right or wrong – you decide.

Come and leave together

But before the four occupiers could make their last stand, events took a dramatic turn.

One minute past midnight, a swarm of people burst into the legislative chamber – protesters, not the police. They repeatedly shouted “leave together” and took away the four men by force. One of the final occupiers clung to a wooden banister, and had to be wrestled away and carried out.

One of the new arrivals told Stand News that protesters downstairs were afraid to come up to the chamber since police action was imminent and they could be blocked in. However, they took the risk to retrieve the occupiers out of solidarity.

We decided to come up together, and leave together with them. If they don’t leave, we don’t leave. We are all worried, but we are even more worried we won’t see them tomorrow.

Arriving from their headquarters in Wan Chai, police officers in riot gear had made it to the Legislative Council Complex by 00:15 a.m. They fired tear gas as protesters moved back towards Harcourt Road in Admiralty and then later dispersed. 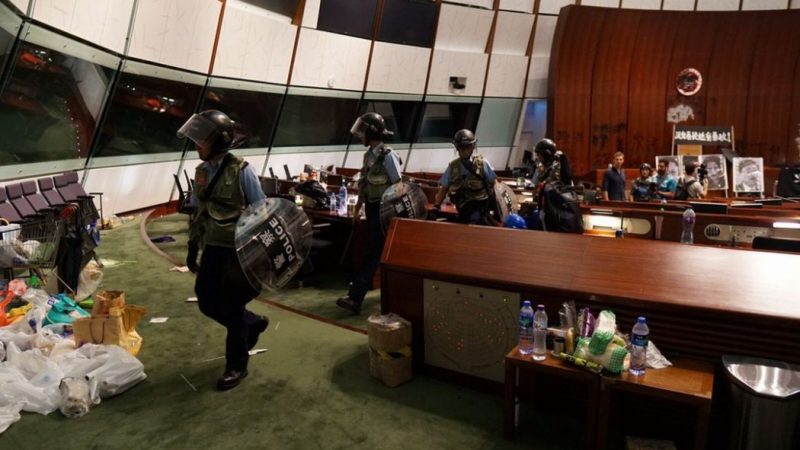 None remained in the Legislative council when the police moved in. Photo: Kris Cheng / HKFP

After securing the premises, police conducted a search of the building to root out any lingering protesters. None remained.