Do you really need to learn Japanese to live in Japan?

Oh yes, you most definitely do, according to foreigners-who-live-in-Japan Twitter 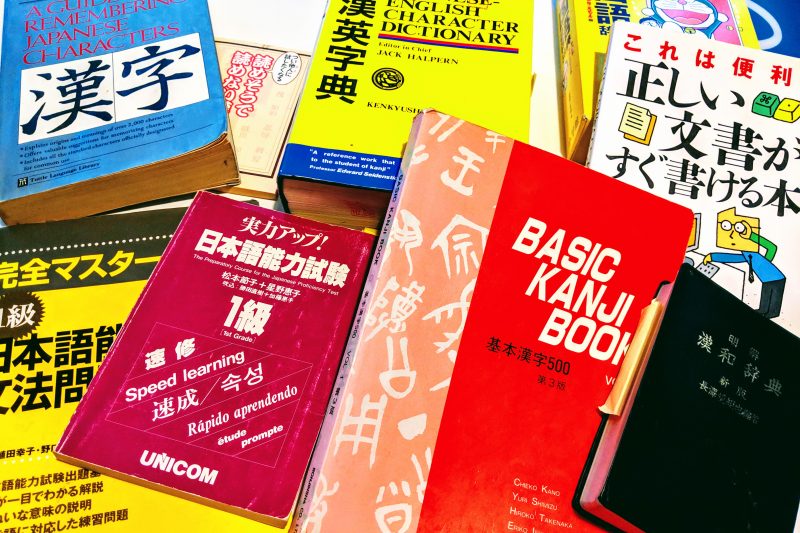 In late April, the New York Times Books section posted a tweet that set off a firestorm of debate and condemnation about whether or not a long-term foreign resident of Japan should actually have to learn Japanese if they live in the country.

The tweet in question linked to a review in the New York Times of Pico Iyer's new book, Autumn Light. Iyer is a well-known essayist and travel writer who has lived in Japan off-and-on for the past twenty-five years.

The debate touched on matters such as Orientalism and how Japan has traditionally been portrayed by Western writers, the status of women in intercultural marriages and the unpaid labour that foreign-born men often rely on simply in order to function from day to day in Japan, and the hierarchy that exists in the foreigner community in Japan.

According to Iyer's publisher, the new book is intended to be “a far-reaching exploration of Japanese history and culture and a moving meditation on impermanence, mortality, and grief.”

Although he has lived in Japan for 25 years, Pico Iyer doesn’t choose to learn more than a smattering of Japanese because he says needs mystery and “a sense of open space in life, something to offset the sense of the familiar.” https://t.co/0JpPZ4e03m

It's unlikely that many people on Twitter actually read the New York Times review of Iyer's book. Most of the 290-some-odd replies to the original tweet, as well as a number of conversations among “foreign-residents-of-Japan Twitter” focused on Iyer's never having learned to speak Japanese despite having lived in the country for a long, long time.

Others commented on the anonymity of Iyer's “Japanese wife” who, presumably makes sure Iyer can live his life easily in Japan.

In other words, he lives the life of an eternal toddler, unable to engage like an adult with everyone arround him. Good thing his wife is there to take care of every single thing that needs doing to actually live here. https://t.co/UUTgg3O5T1

As an on-and-off foreign resident of Japan who has invested a significant amount of time learning Japanese and just trying to fit in, I was irritated by the New York Times Books tweet as well. I left a few comments on Twitter expressing my own disgust with Iyer's supposed attitudes about Japan, although I generally refrain from criticizing fellow writers and residents of Japan in public. The community of long-term foreign residents in Japan active on social media is pretty small, and the number of foreign residents writing about the country is smaller still. A disparaging remark can set up a social media feud that never ends.

On top of that, there is a small but significant number of long-term foreign residents of Japan (some of whom have naturalized and have become Japanese citizens) who stalk and harass journalists, academics and other writers who have the “wrong” opinions about Japan. It's a toxic culture that I've experienced first-hand writing about Japan at Global Voices, and that I don't want to participate in.

And yet still I left comments here and there expressing my irritation with Pico Iyer.

Why does Pico Iyer's refusal to learn Japanese inspire such vitriol? One reason could be that almost every non-Japanese Westerner who spends time in Japan feels both a sense of accomplishment for mastering simple tasks such as reading a train timetable or ordering from a restaurant menu, and a sense of disdain for other foreign visitors or residents who have not.

Not every long-term foreign resident of Japan has the time and energy to master the Japanese language, which makes it easy for those of us who can speak and read Japanese to feel smugly superior (although, in the foreign hierarchy of Japan, there is always someone who has achieved an even higher mastery of Japanese than you, and who can therefore feel even more smugly superior).

It also takes a lot of time and effort for a Westerner to establish a life in Japan. Besides learning approximately 1,800 Chinese characters and mastering 10,000 words, foreign-born residents of Japan have to become near-experts on an almost infinite number of subjects, including etiquette, tax law, history, food, and the importance of always possessing a pocket handkerchief (public lavatories almost never have paper towels for drying one's’ hands).

Doing the hard work of fitting in and making a life in the country results in a sort of feeling of ownership of the country and the culture: “How would you know anything about Japan? You don't even know the rules that govern municipal election campaigning!” (This is a real criticism I actually received recently from another long-termer trying to put me in my place.)

There's also something protective about the “long-termer” reaction to how others write about Japan. Tired tropes regularly reported in Western media about how Japanese people are not having sex or how the destroyed nuclear power plants at Fukushima are poisoning the Pacific are almost obsessively derided and debunked on Twitter and Facebook.

Twitter user @deivudesu has parodied the complicated social hierarchy of foreigners in Japan in a widely-shared diagram that, in spite of being tongue-in-cheek, shows just how much status matters. 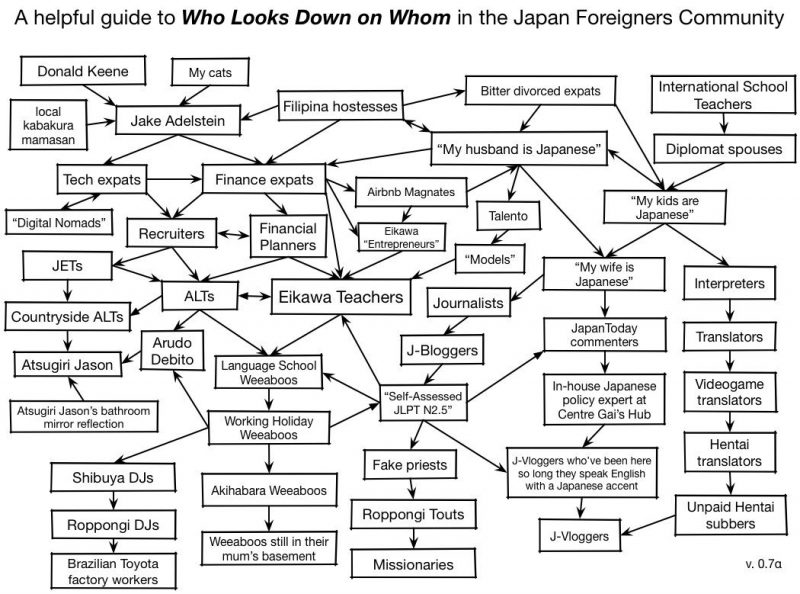 “Who looks down on whom in Japan's foreign community.” Image courtesy Twitter user @deivudesu, not for reproduction without permission.

Yet the more hard-won the lessons we learn about the country, the more some of us realize how mundane life in Japan actually is. Specialty Kitkat chocolate bars, vending machines, Zen temples, and capsule hotels and trains that run on time are all just background noise and are totally unremarkable. Fax machines are actually still regularly used in many countries around the world, and not just in Japan. It's actually quite straightforward to take part in a supposedly insular culture.

Do you really need to learn Japanese to live in Japan? Like anything else in life, the correct answer to this question is entirely personal. At the end of the day, no matter where in the world you live, it's totally up to the individual whether life is mundane, rich with variety, or mysterious.