"Before you became a police officer, you were an ordinary citizen." 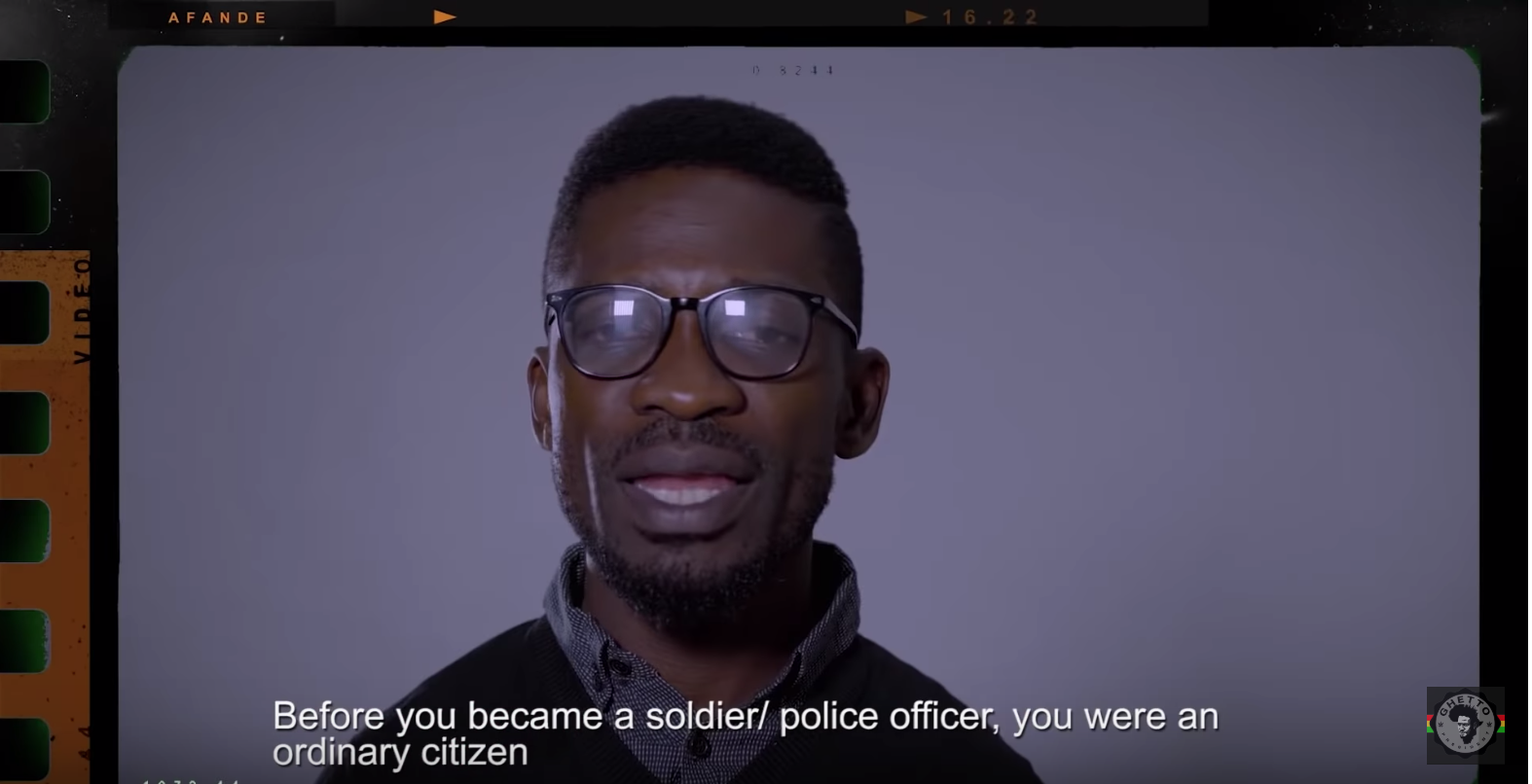 A Screenshot of the Official Music Video of Bobi Wine's ‘Afande’ song via Youtube.

His annual Easter Monday beach concert, held at his One Love Beach Busaabala, 12 kilometers from Kampala, the capital, was tentatively approved by the police but later canceled two days before the event.

Police cordoned off the venue and prohibited access to the premises for everyone, including Bobi Wine, the owner.

In the early hours of Easter Monday, April 22, 2019, Bobi Wine was arrested as he approached the venue for a planned press conference to address the reasons why the police canceled his concert.

Police smashed his car window and used pepper spray to get him out of the vehicle when Bobi Wine insisted that he had not broken any laws.

The video below shows the police arresting Bobi Wine after breaking into his car as he approached the beach property for his press conference. They also dispersed the crowds using water cannons and teargas:

The letter issued by police detailing why they canceled the concert cites that in the past, Bobi Wine failed to follow guidelines provided by the Uganda Police and that they could not guarantee adequate security for both the revelers and residents who live near his beachfront property. 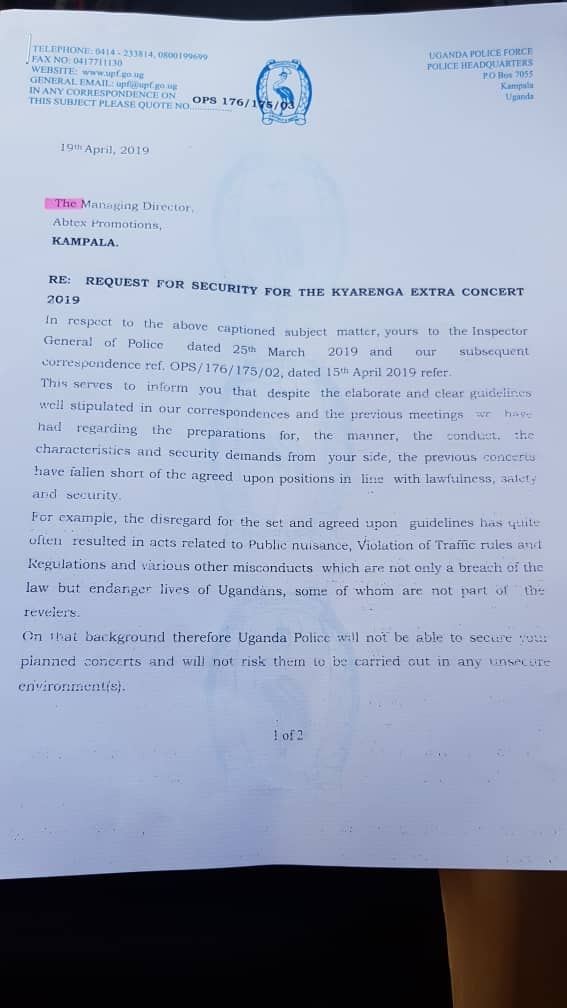 Following the arrest, Bobi Wine went under house arrest, and during this time, he composed a new multilingual song about police brutality.

In the makeshift home studio, he penned lyrics about the need to fight for better police treatment, who he says brutally and unjustly handled him. The song also featured one of Bobi Wine's famous phrases, “I am not fighting you, I am fighting for you.”

I used the past two days under house arrest to compose a song which I now dedicate to our men and women in uniform.we are grateful for the sacrifices they make to keep our country safe and we implore them to stop violating the rights of the citizens. https://t.co/fkJNkXkGZ9

Below is the music video of the Afro Beat song “Afande,” a Swahili word for an officer. The video includes cutaways from several police brutality scenes along with footage recorded inside his house where he remained confined. The video has so far been watched 299,000 times in four days and trending number 1 on Youtube in Uganda:

The song opens with these lyrics in English:

Why beat me, there is no difference between me and you! / Why kick me yet I have no problem with you? / Before you became a soldier or police officer, you were an ordinary citizen / Before you hurt me, listen to my cry.

For the last three years, 124 concerts featuring Bobi Wine have been canceled and police have cited failure to fulfill requirements and at other times failure to request for approval.

Last year, Bobi Wine's maiden concert was canceled several times before he changed venue from the 60,000-capacity Namboole National Stadium to his own One Love Beach Busaabala, which fits around 30,000 people. At the 2018 concert, Bobi Wine spoke about politics — a subject the police always ask him to avoid at his music concerts.

The police wants us to believe that the same Bobi wine who followed guidelines last time during the Kyarenga concert at Busabala has refused to follow the same guidelines today.

NTV Uganda journalist and activist Joel Ssenyonyi wonders why the police used a heavy deployment to stop Bobi Wine's concert but could not use the same manpower to provide security for the concert.

I'm looking at the heavy Police & Army deployment at One Love Beach Busabala and wondering why they didn't deploy this as security for the concert, considering Police said they cancelled the show because Bobi Wine had not provided adequate security for show attenders!

A new proposed bill in Uganda attempts to regulate music industry operations by having every artist register with the government and seek permission to perform on shows outside the country.

As an opposition politician, Bobi Wine has used his role as a musician to promote messages of peace, unity and transformation, specifically focusing on unjust social media taxes introduced last year.

This bill could mean that the government can control Bobi Wine's performances outside of Uganda, ultimately crippling his music career — and dampening his social influence.

Read more: #FreeBobiWine: Protests mount over torture and arrest of a young political force in Uganda

Watchdog Uganda made a summary of what is in the proposed bill, with a few highlights below:

In 2013, the Public Order Management Bill was also passed into law and this gave the inspector general of police (IGP) the power to regulate public gatherings, demonstrations and processions.

In most cases, the police cite the same law to stop political gatherings.

The opposition claims that the IGP does not respond to their requests to peacefully demonstrate and this is the reason why many demonstrations are disrupted by using teargas, bullets and physical beatings by armed forces.

Several opposition leaders including Bobi Wine have found themselves in jail for holding demonstrations without the IGP's approval.

What's next for Bobi Wine?

On April 29, one week after his house arrest, Bobi Wine tried to make his way to the criminal investigations department to file a statement on the Easter concert, but the police again arrested him.

The police presented Bobi Wine in court on old charges of holding illegal demonstrations against the Social Media Tax in 2018.

He has since been remanded to Luzira prison after the police prevented a bail, following several demonstrations around Kampala as a result of his arrest.

On May 2, 2019, he was granted bail following a live teleconference hearing between Bobi Wine in prison and the court in Kampala.