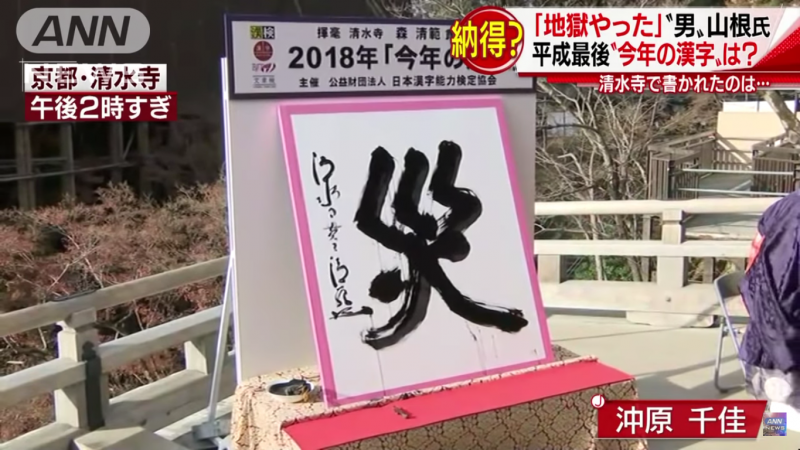 The Chinese character (kanji) “wazawai” or “sai” (災) has been named the kanji that best symbolizes the year 2018 for Japan. The kanji is unveiled each year at historic Kiyomizu Temple in Kyoto. Screencap from ANN News official YouTube Channel.

After a year of earthquakes, torrential rains, floods, typhoons and torrid heat, the Chinese character meaning “disaster” ( 災: “wazawai” or “sai”) was named as Japan's “2018 Kanji of the Year”. Chinese characters are known as kanji (漢字) in Japan.

This year's kanji was selected by the Japanese Kanji Proficiency Society based on the results of a nationwide poll conducted earlier in the fall. Of the 193,214 entries submitted from all Japan, “wazawai” received the most ballots at 20,858.

Throughout 2018, Japan endured a steady series of hammer blows, including:

In a news release, the Kyoto-based Japanese Kanji Proficiency Society explained that “disaster” was a suitable symbol for 2018 in Japan because the kanji character touched people's lives in different ways:

Since, all over Japan, no one knew when calamity (災害) might strike, the number of people who decided to take personal responsibility for disaster preparedness (防災) increased. And since no one could forget the calamities that afflicted Japan, it was a year when many wanted to learn more about how to reduce the effects of natural disasters (減災).

Each December, the Kanji of the Year is announced at historic Kiyomizu-dera, a temple and UNESCO world heritage site in Kyoto, first established 1,300 years ago. Reverend Mori Seihan, the chief abbot of the temple, typically unveils the Kanji of the Year by writing it in traditional calligraphy, captured in this video of the 2018 ceremony:

As Japan prepares for the abdication of its current emperor in May 2019, thereby ending the Heisei Era as it makes the transition to a new emperor, the second most popular Chinese character in this year's poll was “hei” (平). “Hei” is one of two kanji that make up “Heisei” (平成), the name of the reign of the current Emperor of Japan, who is typically known in the rest of the world as Akihito:

While the most popular character was “wazawai”, number-two was “hei” (平) with some commentators stating it is the end of the Heisei (平成) Era in Japan. For many others, the 2018 PyeongChang (written as 平昌 in Japanese) Olympics and the 2018 US-Korea summit that sought peace (平和) were positive aspects of the past years. 😊 We hope that the next year will be one for which a positive and bright kanji character can be chosen. ✨