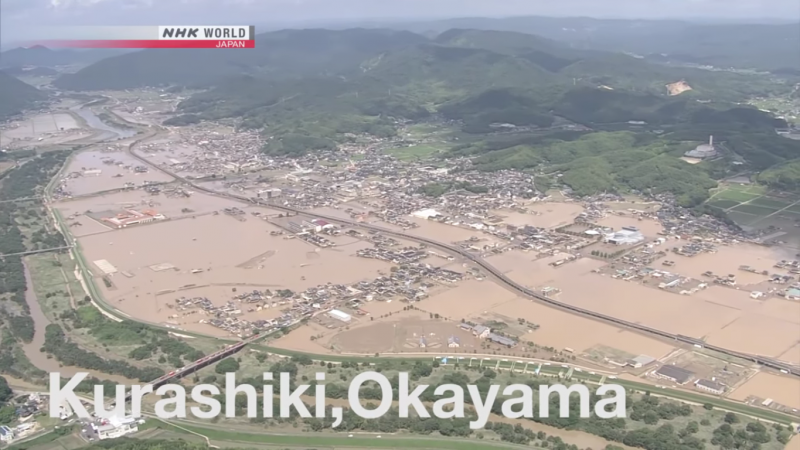 At least 178 people have died and more than 60 others are missing after much of western Japan was hit by torrential rainfall, the most in recorded history.

Flooding has affected much of western Honshu, particularly the neighboring prefectures of Okayama and Hiroshima. As local authorities struggle to rescue stranded residents and restore basic services such as municipal water supplies, Japanese are increasingly demanding answers as to why the death toll is so high and why the central government seemingly reacted so slowly to the disaster.

Record-breaking rains had already been falling for days as part of the annual Japanese rainy season when an even stronger rain front prompted Japan's meteorological authority to predict there would be widespread flooding on Thursday, July 5, especially in western Japan.

By Thursday evening it was reported that some regions had already received more than 400 mm of precipitation over the previous 72 hours, or double the annual rainfall. But more was on the way. 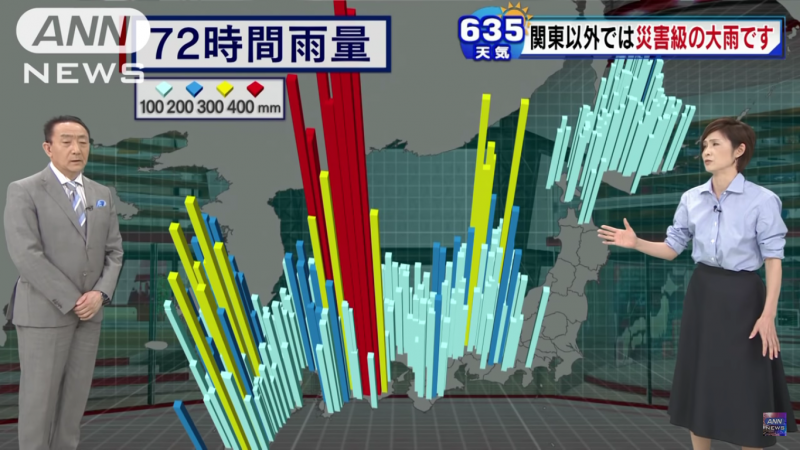 Over the weekend, the rain did not let up. For the first time in its history, the Japanese Meteorological Agency issued flooding disaster warnings for eight prefectures (eventually it would be 11) at the same time.

Kurashiki, a well-preserved tourist town in Okayama, received some of the worst flooding, with nearly 30 percent of the municipality affected.

Torrential rains: Footage taken at 8:51 AM [on Saturday, July 7] in the vicinity of Yata, in Makibi in the city of Kurashiki in Okayama. Houses are flooded to their rooftops.

Hiroshima, another mountainous prefecture that neighbors Okayama to the west, made headlines due to numerous landslides that buried dozens of people alive.

‘Why didn’t I tell her to evacuate?’ asks newlywed, after losing wife of three weeks in Hiroshima landslide https://t.co/ErU4sP9ajY

The rains affected almost every prefecture in Japan to the west of Mount Fuji. While on the east side of the city there were fears a dam might fail, the normally placid Kamo River that runs through western Kyoto became a raging torrent and threatened to flood the city's central shopping district.

The Kamo River is flooding.

Due to the size and scope of the rainfall, flooding and landslides, it was difficult to grasp the sheer scale of multiple disasters occurring simultaneously all over western Japan. Over the weekend, mapping researcher Hidenori Watanave created an interactive tool that used Google Earth to identify damaged infrastructure across the region. Watanave said the tool will soon be online and available for use by the public.

As mentioned in a previous tweet, [photos of damaged areas] are shown as an overlay on Google Earth.

By Monday, July 9, the multitude of disasters had been given an official name by the Japanese Meteorological Agency (JMA):

Prime Minister Abe Shinzo and his cabinet started to receive criticism for failing to take action.

Media coverage treated the ongoing deluge as a major crisis as early Thursday, July 5. Meanwhile on that Thursday, Abe and senior members of the ruling Liberal Democratic Party spent a festive evening at a private event in Tokyo, toasting their efforts to secure Abe an unprecedented third term as head of the party and prime minister of Japan.

The clock points past 8:30 PM [on Thursday, July 5]. By this time wouldn't it have been clear just how much devastation there was?

From Nikkan Gendai tabloid:
[Headline from first image] “While people were being engulfed by water, what was this government actually doing?”

[Headline and copy from second image]: “What do you mean ‘the people's lives come first?'”

“They were at a drinking party, planning their own political strategy or out visiting their cronies, preoccupied with keeping their regime alive. Reacting to the flooding crisis was pushed back as an afterthought, intensifying the damage.”

Questions about why death toll and damage were so severe

Prime Minister Abe managed to visit flood-stricken areas by Wednesday, July 11, nearly a week after it was apparent Japan was experiencing a major natural disaster. Besides a likely death toll surpassing 200, 70,000 homes across western Japan had been flooded and 2 million people had been forced to evacuate their homes.

Thick mud, damaged transportation infrastructure and the continuing risk of collapsing dams have also made it hard to deliver aid, especially drinking water and food, to the evacuees. A mountain of trash from destroyed homes is straining local authorities as they try to figure out what to do with it.

Increasingly, people are wondering why, in a country used to sudden torrential rains, the death toll has been so high. In Okayama Prefecture, which has so far experienced the highest number of deaths over the past week, the risk of flooding is said to have been known in advance.

Linda Sieg, reporting for Reuters news agency, noted that one reason was that many people did not know where to go following evacuation alerts. As well, Japan has traditionally prepared for earthquakes rather than large-scale flooding, while many homes are built in landslide-prone locations due to lack of available land for housing.

In the end, Mainichi newspaper observed, the sheer volume of water may have overwhelmed existing flood defenses.

In the aftermath, questions are also being asked about how climate change may have contributed the disaster. The rise in average surface temperatures on Earth is forecasted to fuel an increase in the frequency and intensity of extreme weather events, such as heavy rain, particularly in western Japan.

While media in Western and English-speaking countries largely reported the heavy rains and flooding as a story about Japan, Japanese wire service Kyodo pointed out the disaster was just one of several weather events occurring at the same time around the world:

As record-breaking torrential rains delivered enormous damage to western Japan, the Japan Meteorological Agency issued weather warnings to 11 prefectures, the greatest number of warnings at one time ever.

As unusual weather becomes the new normal, how are we to protect ourselves?