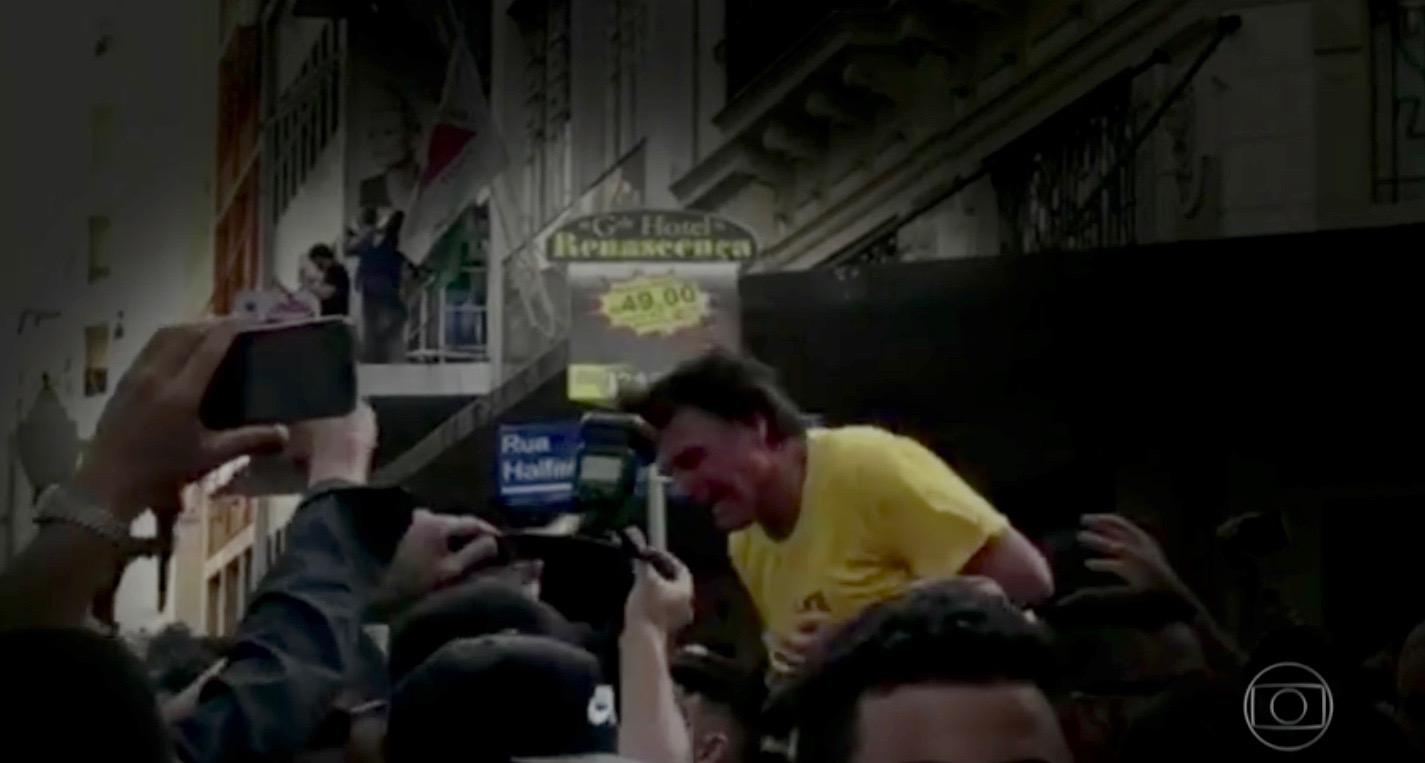 Jair Bolsonaro, the right-wing presidential candidate who is leading the polls in Brazil, was attacked on September 6, 2018 during a campaign event at downtown Juiz de Fora in the state of Minas Gerais.

Bolsonaro was in the middle of his act of being carried by supporters when he was suddenly stabbed in the stomach. Videos recorded at the place show Bolsonaro crunching, screaming and being carried into a car.

The attacker was beaten by the candidate's supporters.

Bolsonaro lost of a lot of blood and underwent surgery. The injuries – a pierced intestine and other lesions – are enough to put him out of campaigning in the streets for at least a week. Elections in Brazil are scheduled for October 7.

Adelio Bispo de Oliveira, who admitted to committing the crime, said he was following “God’s orders”. According to a Buzzfeed profile, he had been a missionary to some evangelical church and lost touch with his family in the past three to four years.

Adelio’s Facebook page showed pictures of him with signs claiming “politicians are useless” and asking President Michel Temer to resign. Another photo showed support to the call for the release of former President Luiz Inácio Lula da Silva who was arrested in April for corruption and money laundering charges, but remains the frontrunner in this year’s elections – even though his candidacy is not legally possible.

News outlets also found out that Adelio was previously affiliated with a left-wing party – PSOL – for seven years. The party quickly repudiated the act as did the majority of other candidates who canceled their campaign schedules, and rejected “violence as a political language” and demanded the punishment of those responsible for the attack.

According to Adelio's lawyer, he attacked Bolsonaro because he felt offended by the candidate’s speech. The 40-year-old Adelio, who is currently unemployed, claimed that God sent him because Bolsonaro stands for “the extermination of homosexuals, black, poor and indigenous people, which he strongly disagrees with”.

Adelio is now facing up to 20 years in prison. 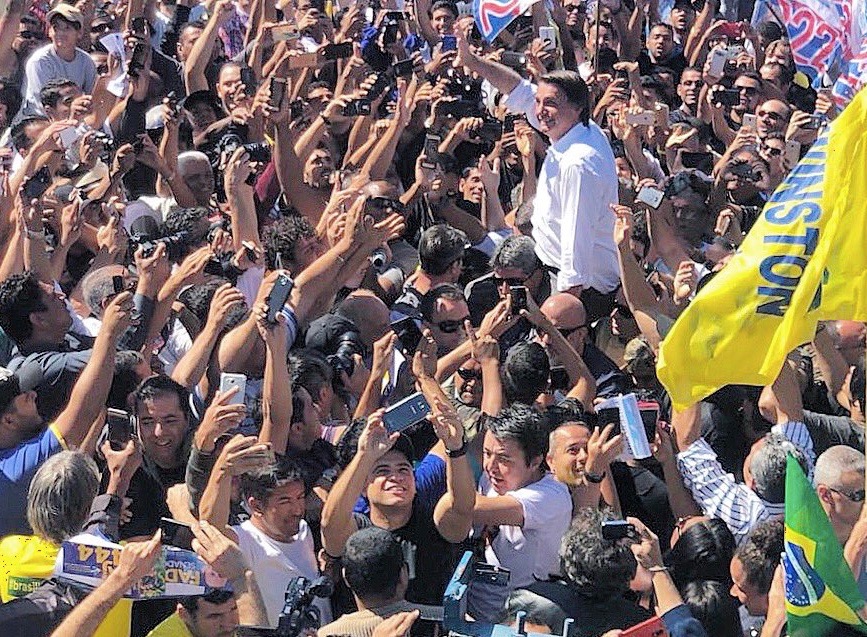 Bolsonaro during one of his recent campaign events | Image: @jairbolsonaro

Bolsonaro was a military captain who was put on trial for “acts of indiscipline and disloyalty” in the 1980s before his election to Rio de Janeiro’s City Council in 1988. A year later he was elected in Congress representing the “military class”.

Over the years, he made several controversial statements such as defending the military coup of 1964 that put Brazil under a two-decade dictatorship by calling it a revolution, claiming that former president Fernando Henrique Cardoso should have been fusilladed, defending the use of torture or that women should have lower wages because they can become pregnant, linking homosexuality to pedophilia and using false news about a “gay kit” allegedly distributed in public schools.

In a frustrated society that has 63,000 homicides per year, with only 6 percent of them being solved by the police, and growing rates of armed robberies, Bolsonaro pressed for the relaxation of gun control laws so that “good citizens can defend themselves”.

The president of Bolsonaro’s party declared ‘war’ against leftist candidates who are blamed as partially responsible for the attack. However, Bolsonaro appealed for a more “moderate tone” in reacting to what happened to him.

Bolsonaro's sons and other political allies have been using his hospital bed as an opportunity to campaign. One day after the attack, Flávio Bolsonaro, the congressman’s eldest son who is running for senate, posted a picture of his father after surgery saying:

Jair Bolsonaro is stronger than ever and ready to be elected Brazil's president in the FIRST RUN! God just gave us another sign that good will win over evil! Thanks to everyone who supported us at this very difficult time! Brazil above everything, God above everyone!

The following day, in another picture posted by Flavio, Bolsonaro appears at a hospital bed flashing his trademark gun shooting sign. He also thanked the people and his supporters for their prayers.

My father keeps recovering and began physical therapy. Thanks to everyone for your support and prayers! Rio de Janeiro people, Sunday, 11 am, at Posto 6, we will have an activity for Bolsonaro in Copacabana. I'll send more details soon, ok?

The attack on Bolsonaro generated 3.2 million social media mentions in 16 hours. But according to a study by Getulio Vargas Foundation, 40.5 percent of social media users initially doubted the veracity of the attack.

Fabio Malini, one of the professors who conducted the study, cautioned that Bolsonaro's campaign may lose more than gain from the event since he will be out of the streets, where he was actually gaining strength.

To be polite is impossible. This is an election of revenge (to any side). Bolsonaro will not have compassion coming from the networks which he always opposed, on the contrary, they will be even more alert to his political use of the attack. It'll be a strong watch upon him.

Meanwhile, some specialists interviewed by the BBC believe the attack can favor Bolsonaro’s odds through a “tragedy effect”, but it may also lose power on election day.

Whatever the outcome may be, as social scientist and journalist Leonardo Sakamoto writes, “the attack opened a new era in the country’s political violence”:

I hope for a quick and full recovery for the candidate and the punishment for the person responsible for the crime. But I also hope for the country not to transform this attack into a trigger that will make the war against itself even deeper. Because, if that happens, we will not have much left after October.

The attack against Bolsonaro was only the most recent in a political environment plagued by violence and impunity. During the municipal elections in 2016, a candidate for mayor was shot dead while campaigning in the state of Goiás. In Rio, militias took over control of the local politics threatening adversaries for years. In March this year, Councilwoman Marielle Franco was killed inside her car with her driver. Before his arrest, Lula’s campaign bus was shot in what the police described as a “planned attack”.

The attack was condemned by the NGO Human Rights Watch, saying “political or ideological differences should only be resolved through democratic processes, and never through violence”; and the UN Human Rights Office, asking for “a quick investigation and punishment of the culprits”.