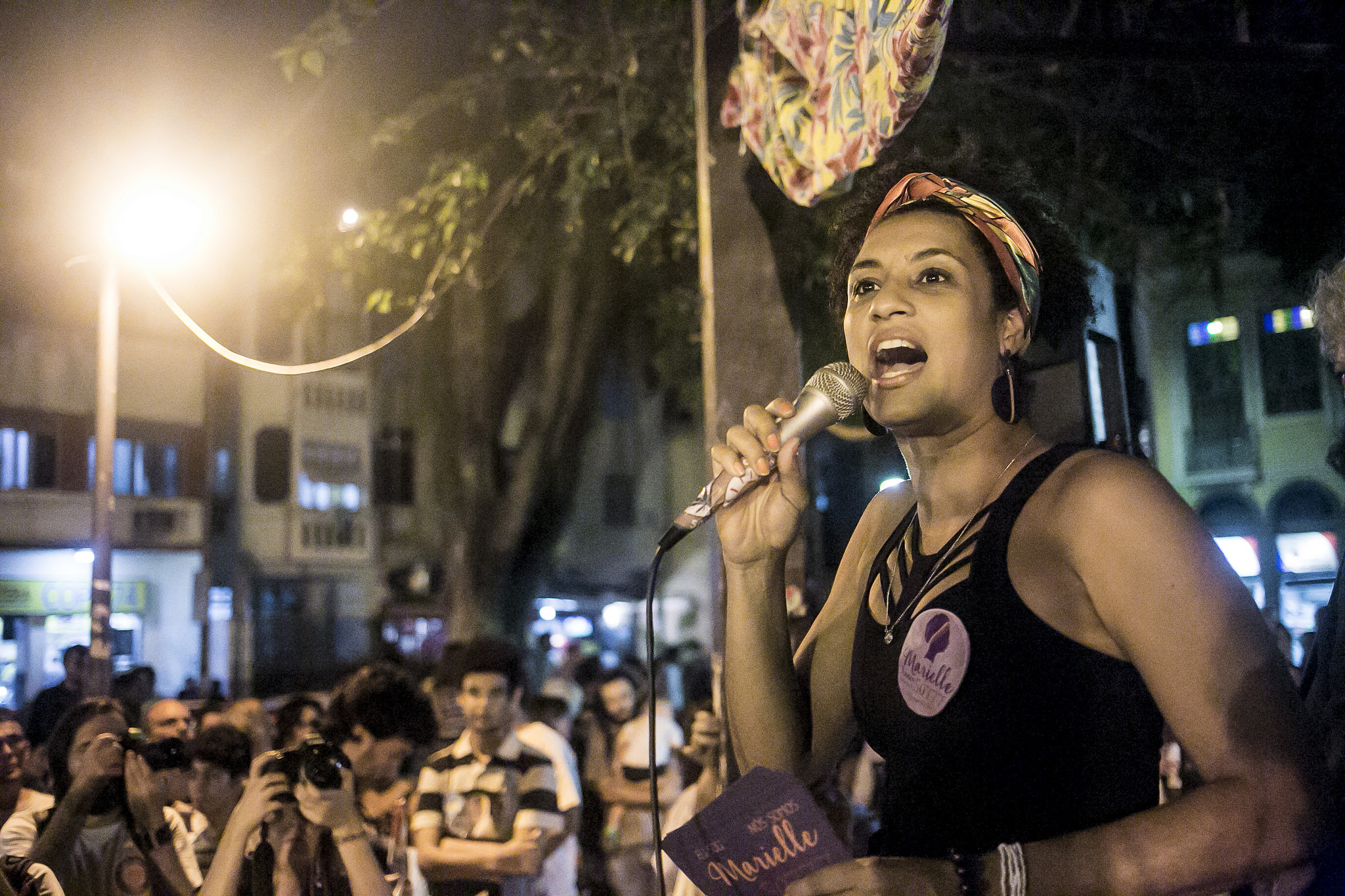 Less than two hours before she was murdered on the evening of March 14, Rio de Janeiro city councillor Marielle Franco was speaking at a roundtable of black women activists about “young black women moving the structures”.

As Franco was leaving the site, a car pulled up to the side of her own vehicle and fired nine shots into it. Franco and her driver, Anderson Pedro Gomes, were killed on the spot. The councillor's press officer, who was in the backseat, was hit by glass fragments and injured but survived.

Bearing all the hallmarks of an execution, the attack has sent shockwaves through Brazil including social media. Nationwide protests have been scheduled for the next couple of days. More than 70,000 people and organisations have confirmed their presence in the demonstration in Rio de Janeiro.

Marielle Franco was elected with the leftist Socialist and Freedom Party (PSOL) in 2016 as the fifth most voted councillor in Rio de Janeiro, Brazil's second-largest city with a population of over six million.

As a young, black, favela-bred lesbian woman activist, she championed several underrepresented demographics in Brazil's institutional politics and was beloved by activists across the country.

Remembering a fierce critic and activist

Marielle Franco was born and raised in the Maré favela, the largest complex in Rio and home to 130,000 people. In 2005, Franco's best friend was killed there during a confrontation between police officers and drug dealers. That episode drove her into human rights advocacy and activism against police violence.

A fierce critic of Rio's deadly police, she had been appointed in late February 2018 as the main rapporteur for the commission of Brazil's municipal assembly to monitor the ongoing army intervention in Rio de Janeiro.

Brazil's army took over the city's public security in early February in response to gang violence despite criticism from local non-governmental organizations and the United Nations’ Human Rights Council.

She had openly criticized the intervention and compared it to a similar operation in her native Maré favela during the 2014 World Cup.

Franco consistently spoke out, both from the pulpit and on her social media pages, against extrajudicial killings of Rio's poor and mostly black favela residents.

Just this week, she made a series of posts on Facebook about the ongoing violence in the Acari favela:

This week, two young men were killed and dumped at a hole.   Today, the police were walking through the streets threatening residents.

Franco called attention to a news story that reported five shoot-outs in the favela over the course of seven days: 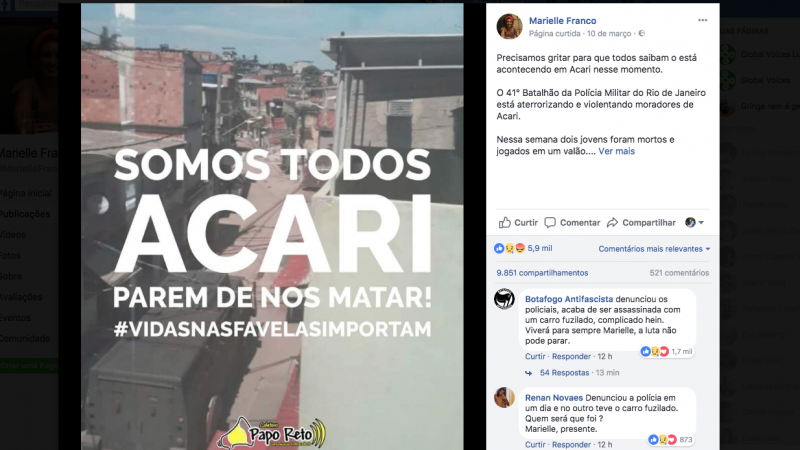 Police lethality in Brazil is staggering. In 2016, 920 killings by police were documented in Rio de Janeiro alone, up from 419 in 2012, according to Amnesty International. A report by Public Security Forum, a national research institution, counted 4,224 killings by police officers in the whole country in 2016, with 99 percent of them being men and 76 percent black. Many of those homicides may amount to extrajudicial killings, a crime under international law.

On social media, organisations, political parties and civil profiles used hashtags asking for a throughout the investigation of Franco's murder.

Her political importance goes beyond the direct actions to combat violence suffered by black people from Rio. Marielle, while a black woman, represented millions of women without a political voice within the State, breaking a pact of exclusion of black people crystalized by the history of segregation in Brazil, masked by the myth of racial democracy.

There should not be any doubts about the context, motivation, and authorship of Marielle Franco's murder.

Her party PSOL issued an official statement saying that the hypothesis of a “political crime” could not be discarded, since “she had just denounced a brutal action” by the police. 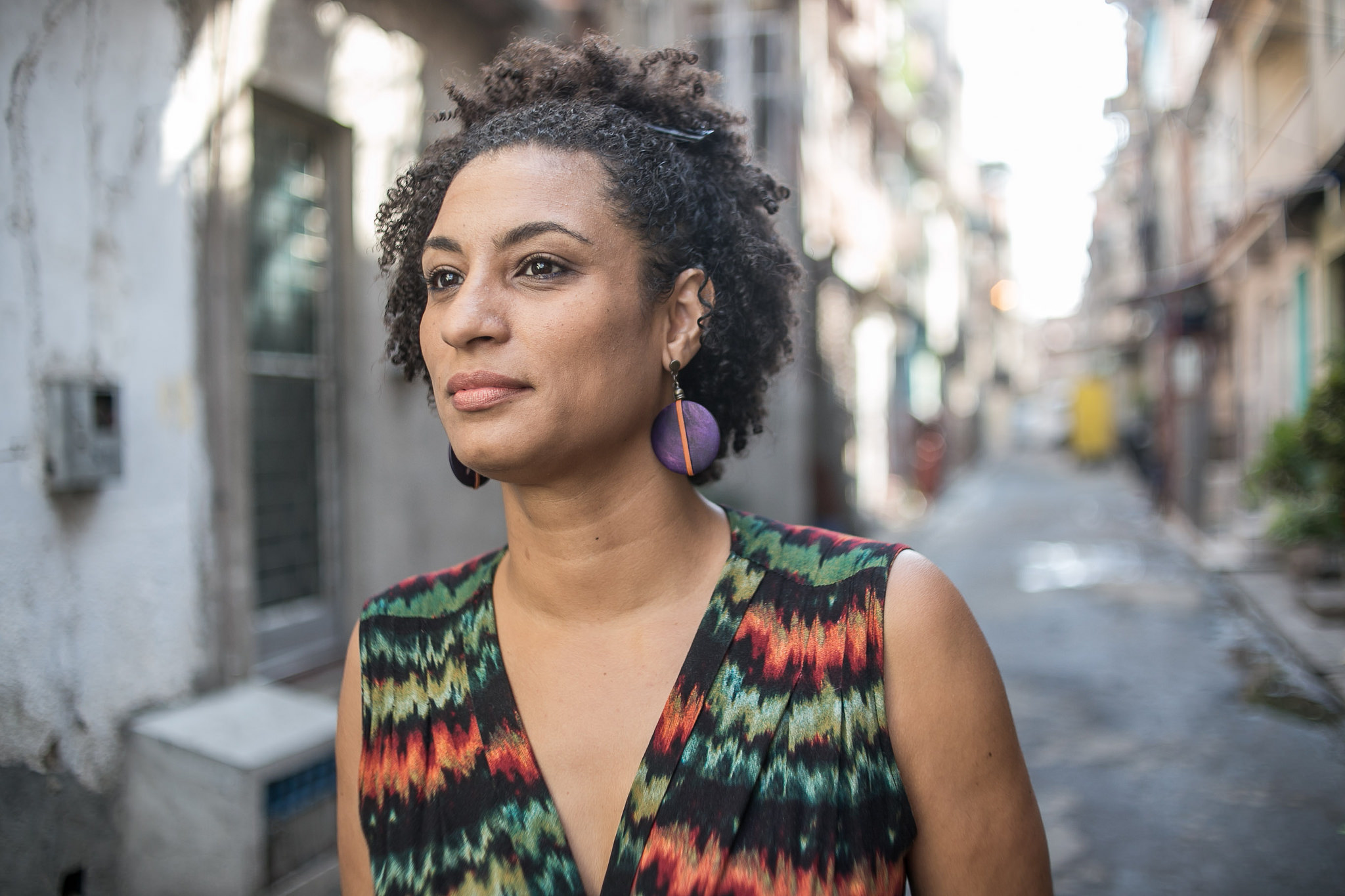 Sociologist and public security specialist Luiz Eduardo Soares, a close friend to Franco, remembered how the attack echoes that of Judge Patricia Acioli, also killed in a drive-by shooting in 2011. Accioli had been overseeing a number of cases involving paramilitary groups (called ‘militias’ in Rio).

When, my god, will the people awake and understand that public unsafety starts at the most corrupt and brutal segments inside police forces, and that we cannot live with this haunting legacy from the dictatorship period anymore. Will we continue to talk about ‘individual misconduct'? What can we do now, besides crying?

During the black activists’ roundtable that Franco had joined hours before being killed, she said:

We have a movement pushing for more women in politics, in power positions, more women occupying decision making spots, because that is the only way of getting more qualified public policies.

Franco remembered two black women politicians who had come before her, ten years apart from each other, urging:

We cannot wait another 10 years or think that I will be there for another 10.