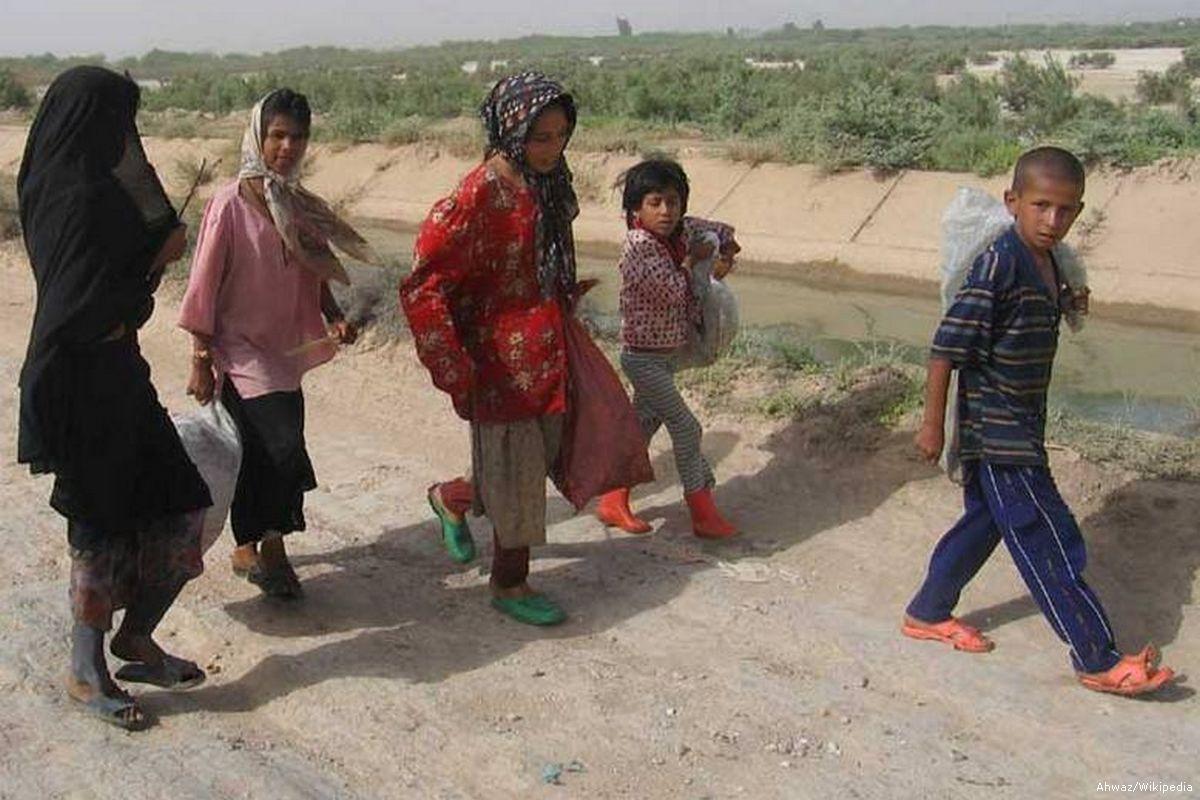 Ahwazi children walk alongside a canal. A 12-year-old boy has been the latest casualty of Ahwaz's continued state of poverty and struggle. Image: Wikimedia Commons, CC-BY-SA 3.0

A 12-year-old Ahwazi boy was reported dead by suicide on the evening of July 24, 2018, in the Republic of Iran, sparking outrage over the discrimination and hardship faced by the country's minority Ahawzi population.

Suicide rates and cases of self-immolation continue to rise among the Ahwazi, an Arab community who live in Iran's oil and gas-rich southern provinces and constitute 10 percent of the country's population. Viewed as inferior because of their ethnicity, most Ahwazis exist below the poverty line, with limited or no access to employment, education, healthcare, or basic utilities.

The mother of the young boy, who was identified only as Meysam, returned to the family home in Abadan, in the province of Khuzestan, on Tuesday evening to find that her 12-year-old son had hanged himself. The boy was the eldest of two children, the other a five-year-old girl.

The mother, the sole wage-earner of the household, worked as a housekeeper and cleaner and struggled to provide for herself and her children. According to activists, shortly before her son's death, the woman had sold some of the family's meager possessions, including her son’s mobile phone and bicycle, in order to pay outstanding rent.

Meysam's suicide is the latest to afflict the Ahwazi Arab community. In the past couple of years, a high number of Ahwazi Arab young men have protested through acts of suicidal self-immolation, often in front of the oil and gas companies’ headquarters and government offices.

In an interview with Ahwaz monitor in April 2017, the Ahwazi activist Karim Khalaf Dohimi pondered the reasons behind those events:

There is a surge of high incidence of suicide across Al-Ahwaz due to poverty and the high rate of unemployment as well as the closure of the Ahwazi Arab free market that led to Ahwazi youth and especially those who are married to commit suicide. The suicide attempts also increased in rural areas in Ahwaz since 90 percent of Ahwazi Arab people in rural areas are suffering from poverty and very low income. They are overwhelmingly dependent on agriculture and fishing for their food but these people have been left with no alternative source of income after their entire arable lands on the banks of the Karoon River were forcibly confiscated by regime officials with very low compensation.

There is, however, an economic crisis occurring across Iran, and there is a general upswing of suicide rates across the country. According to the World Health Organisation (WHO), and various studies led inside of Iran reported by Iranian news agencies such as the Iranian Labour News Agency (ILNA), suicide rates in Iran are on the rise. In 2014, the WHO reported that 5,3 out of 100,000 Iranians committed suicide.

On social media, in reaction to the harsh news, one Iranian remarked on the sad state of the country reflected in both Meysam's suicide, alongside similar deaths amongst another Ahwazi boy of 17 years old alongside another 15 year old girl from an Arab dominated city of Iran.

The Islamic Republic of Iran in one week

+ all 3 killed themselves because of the struggle for a livelihood. What slogans were there before 1979, and now after 40 years of it? #become_united

In Ahwaz, the region's natural wealth has been turned into a source of suffering for its people. On one hand, the Ahwazi bears the brunt of the environmental pollution caused by the oil and gas drilling operations; on the other, profits from operations in the region bolster the authorities’ security apparatus, who are employed to crush any resistance in the region.

Caribbean  22 hours ago
Cancel this reply