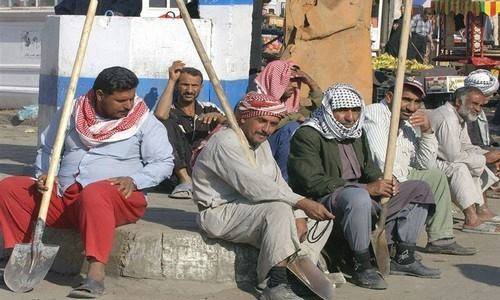 Iran's Ahwaz region is experiencing unusually high unemployment and poverty rates amongst its indigenous Arab population. The past few months have seen a violent upswing in Arab Ahwazi suicides. Photo of Arab workers in Iran provided by Patriotic Arab Democratic Movement in Ahwaz. Used with permission.

The self-immolation of a man named Jassim Moramazi on 27 August has thrust the desperate situation of poverty and unemployment for Iran's Ahwazi Arab community into the spotlight.

Moramazi was married with a child, living in the Al-Thawra neighborhood of Ahwaz in southwestern Iran. He had suffered from anxiety, depression and shame due to the helplessness he felt about him and his family's situation, according to Ahwazi rights groups working inside Ahwaz who wished to remain anonymous.

A graphic video shared on YouTube reportedly captured the moments after set himself on fire. Several people managed to quickly extinguish the flames, and Moramazi was admitted to Taleghani hospital in Ahwaz city. Local sources stated that his burns were too severe for doctors to treat. He died shortly afterward.

His wasn't the only case of suicide among the Ahwazi Arab minority in August, and local activists are warning of a spike in the number of men taking their own lives. The Ahwazi Centre for Human Rights reported that several others — Hamid Maniat, Ali Hazbawi, Sayed Falah Moussawi, and Shahab Bani Tamim — hung themselves within the month.

The region where the Ahwazi Arab community is most present in Iran has been troubled by a deep economic crisis that has hindered its indigenous Arab population from securing its most basic needs.

Until a century ago, Arab Ahwaz was a primarily autonomous region in Iran until the Pahlavi monarchy took over and made an effort to end ethnic autonomy across Iran in 1925. The Ahwaz region is responsible for some of Iran's biggest oil and gas fields, and some of the most nourishing and arable lands for Iran's agricultural industry. Despite these valuable resources, the region's economy continues to struggle, and the indigenous population see little of the rewards of this wealth. They are often the victims of untreated illness, hunger and deprivation.

The Iranian regime systematically denies Ahwazi Arabs jobs in the local oil, gas and petrochemical industries. The government has also constructed a multitude of dams diverting water from Arab areas to Persian areas such as the Isfahan, Yazd, Kerman, and Qom provinces. These dams have only served to worsen the devastation from a drought currently plaguing the region, destroying the local agriculture, fishing, and palm industries.

The unemployment rate among the Ahwazi Arab youth has now risen to 81%. Nour Mohammed Pur, Iran's general director of cooperatives, work, and social welfare, stated that 5% of Ahwazis looking for jobs have pre-high school education, 55% of those seeking work only completed secondary school, and 45% of those Ahwazi job seekers hold university degrees.

Karim Dohimi, an Iranian Ahwazi rights activist based in London, told Global Voices that the situation of “poverty, unemployment and racial ethnic discrimination” has led to a “massive increase” in the number of young Ahwazi men turning to suicide.

Dohimi said unemployment in particular has worsened recently, thanks to a combination of large numbers of ethnic Persians arriving in Ahwaz, and anti-Arab discrimination in hiring practices:

The preference of officials and institutions’ authorities in recruiting non-Arab workforces deprive the local Ahwazi Arabs of access to employment opportunities in all sectors. This is a part of the systematic policy of the occupying regime that intends to kill the spirit of national resistance of young Arabs, forcing them to search for subsistence outside their homeland of Ahwaz. There are people who have had to change their first and last name so as to hide their Ahwazi Arab identity to get hired as even Arabic names cannot be tolerated in the workplace let alone speaking Arabic or wearing Arabic clothes.

Given the conditions that Ahwazi Arabs are forced to bear, human rights defenders are sounding the alarm before things become explosive. It remains to be seen if the world sits up and takes notice.