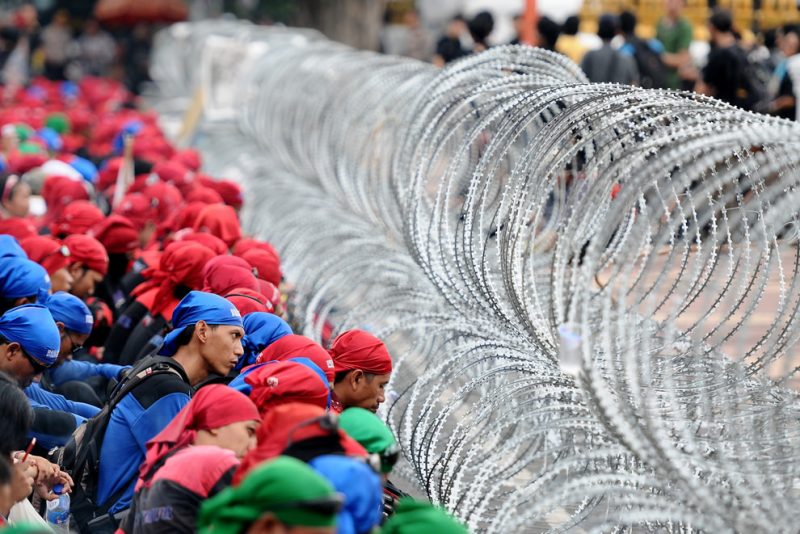 Indonesian mass organizations are also affected by the new law which empowers the government to ban groups that threaten national unity. Flickr photo by Jordi Bernabeu Farrús (CC BY 2.0)

Indonesia's House of Representatives has passed a presidential decree into law that empowers the government to disband organizations even without a prior court order, amid warnings from legal experts and human rights activists that it puts civil liberties at risk.

President Joko Widodo (Jokowi) had issued the suggested amendment to Law No. 17/2013 on Civil Society Organizations on July 10, 2017. It outlaws groups which violate or threaten to undermine the pluralist state ideology known as Pancasila.

Jokowi said this is necessary to preserve national unity and diversity amid the growing influence of hardline Islamic groups.

Indonesia is home to the biggest Muslim population in the world and boasts of promoting a moderate view of Islam. But in recent years, certain organizations have been aggressive in enforcing their intolerant doctrines, which has raised fears about the spread of religion-based discrimination.

In particular, the government wanted to ban groups like the Hizbut-Tahrir Indonesia (HTI) which aims to establish a caliphate in the country. HTI was one of the groups that mobilized tens of thousands of its followers and succeeded in its call of deposing the Christian governor of Jakarta, who was accused of disrespecting Islam. Ahok, the former governor of Jakarta, is an ally of Jokowi.

While many secular groups and human rights activists support the action of the government against HTI, they have strongly expressed their concern about the impact of the new regulation on other groups in the country. They pointed out that the new regulation has given the executive broad powers and too much discretion to decide which groups are deemed a threat to national unity. They added that the decree undermines civil liberties and other constitutionally guaranteed rights.

The new law gives the government a blank check to outlaw any organization or group it pleases on the grounds that their platforms or activities run counter to the state ideology or the Constitution.

There is no guarantee the current or future governments will not be tempted to exercise the new power to quell critics or opposition using the pretext of national security.

Indonesia was ruled by General Suharto from 1965 to 1998 who was accused of violating the rights of thousands of Indonesians.

The Indonesian Legal Aid Foundation reviewed the law and concluded that it “perpetuates a multi-interpretation article on blasphemy” which could result into the criminalization of activities that are deemed a threat by those in power.

Usman Hamid, director of Amnesty International Indonesia, reminded the Jokowi government that there are better alternatives to combating extremism:

There are many ways for the Indonesian government to combat radicalism and defend social cohesion. Removing almost all meaningful legal protections of freedom of association is not the way to do that. Indonesia’s pluralist politicians and civil society are understandably deeply antagonistic towards the anti-democratic mission of groups like Hizbut Tahrir Indonesia. So are we. But we should recognise that the same laws that protect HTI from arbitrary state action are the ones that protect the forces of democracy and human rights as well.

Scholar Deasy Simandjuntak questioned the appropriateness of the approach adopted by the government in dealing with groups like the HTI:

The Indonesian government is walking on thin ice as it navigates between the need for stability and security on the one hand, and its democratic commitment to ensuring political freedom for all Indonesians on the other.

The rise of intolerance does call for stronger government intervention in curbing the growth of hardline groups. However, the question remains whether an expansion of powers that gives the Indonesian government close to unfettered discretion to define which groups to sanction is the best way forward.

For its part, the government insisted that the law is constitutional. Jokowi welcomed the appeal of some parties to revise some parts of the law. Out of 445 members of the House of Representatives, as many as 314 members voted to pass the law. Six of the 10 political parties approved the measure.