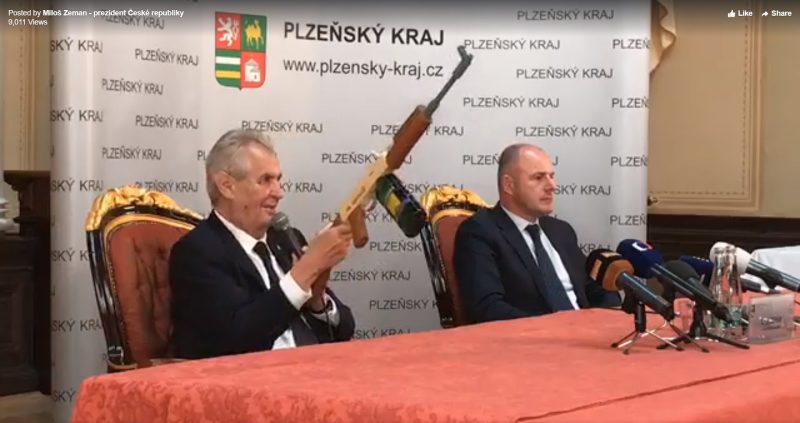 Screenshot from the Oct 20 press conference video published on the official Facebook page of the Czech President Miloš Zeman.

Last Friday, Czech president Miloš Zeman brandished a wooden replica of an assault rifle with the inscription ‘for journalists’ written on its side, boasting that it was a gift from a recent trip to the country's western region.

This latest attempt at a joke by President Zemen, a man known for his sharp criticism of media workers, was met with loud disapproval by journalists and citizens who didn't appreciate his brand of humor.

While holding a press conference about his tour of the western Plzeň Region, a smiling Zeman pulled out and waved the wooden AK-47 replica which was allegedly given to him during the visit. In the place of an ammunition clip, the mock weapon had a bottle of the local liquor Becherovka (a bitter digestive similar to Jägermeister).

Zeman also joked to that journalists didn't have to be scared to film him because “he doesn't know how to shoot.” He also expressed satisfaction with the absence of opposition supporters in the audience.

This is not the first time that Zeman has joked about harming journalists. In May, during a visit to China, he reportedly joked with Russian President Vladimir Putin that “there are too many journalists, we should liquidate them.”

Investigative journalist Onrej Kundra was not amused. In Kundra's criticism of the Czech president's latest comments, he referenced another incident which occurred the week before, during Zemen's visit to France, when the president told his bodyguards he would kill a Czech television worker if they didn't chase him away:

Journalists should be liquidated, Zeman told Putin. Remove the cameraman or I will kill him, he continued in France. And today he pulled the machine gun.

Some commentators implied that the presence of alcohol in Zeman's stunt was no accident.

Miloš Zeman has been president of the Czech Republic since 2013 and has announced his intent to run for a second term in the upcoming 2018 elections.

His long-term ally, the populist billionaire and media mogul Andrej Babiš, just won the parliamentary elections and is slated to become prime minister. According to Euronews, “Babiš, the country’s second-richest man, has been buying up large chunks of the nation’s media in an effort to silence criticism and, according to his critics, to undermine democracy.”

According World Press Freedom Index, compiled by Reporters without Borders, Czech Republic's rank fell from 14 in 2012 to 23 in 2017.

Several bills were drafted during 2016 with the aim of increasing the penalties for criminal defamation, especially when the President is concerned. The concentration of media ownership has reached critical levels. Since 2008, new oligarchs have been using their fortunes to buy up newspapers to consolidate their influence. One of them, Andrej Babiš, is both Deputy Prime Minister and Finance Minister as well as owner of the two most influential daily newspapers…

At the European level, Zeman's gun antics have been considered highly inappropriate, as they come several days after the killing of investigative journalist Daphne Caruana Galizia in Malta, another European Union member state.

* Note on translation: Zeman used the term “samopal,” meaning sub-machine gun, to designate his wooden weapon. Technically the AK-47 is an assault rifle, which in Czech would be called “útočná puška” or “automatická puška.” These two types of weapons differ in overall size, barrel length, rate of fire, bullet caliber and in particular the effective range (dozens vs hundreds of meters). The former is often considered ‘pistol-like,’ while the latter is considered in-between a rifle and machine gun, and during the second half of 20th century has replaced both as a standard weapon in most armies around the world.