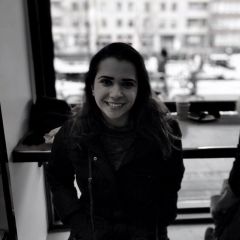 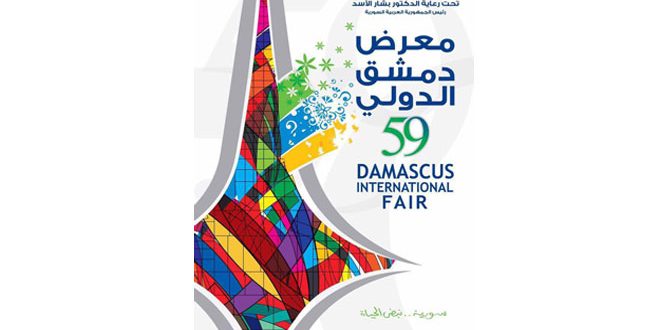 The official poster for the 59th Damascus International Fair.

The annual Damascus International Fair returned for its 59th time and its first since the 2011 Syrian uprising. It opened on August 17, 2017, and lasted for 10 days, with participants ranging from the textiles industry to the agricultural industry.

According to Syrian state media outlet ‘SANA’, international exhibitors joined from 23 countries — those that President Bashar al-Assad's government considers “friends of Syria”, such as Russia, Iran, Venezuela and China.

The fair also saw the presence of private companies from countries that cut off relations with the Syrian regime, including France, Germany and Britain.

The fair’s general director, Fares al-Kartally, told AFP that the return of the fair was possible due to the return of calm and stability in most regions in Syria. However, less than 10 miles (16 kilometers) away from the fairground, fighting was ongoing in rebel-held areas of the Damascus suburbs of Al Hajar Al Aswad and Babbila.

The regime's well-known spokesperson, Bouthaina Shaaban, was quoted in SANA saying, “We are at the beginning of the road towards reconstruction.” 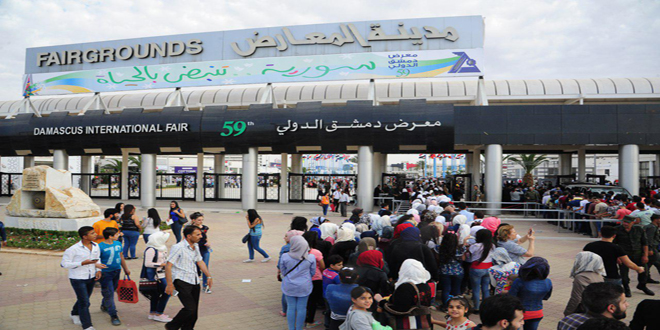 Attendees standing outside the entrance to the Fairground on the third day of the Damascus International Fair. Source: SANA News Agency, Syrian state media organization.

Due to heavy destruction sustained during the war, major reconstruction efforts have taken place throughout Damascus. Areas that were besieged, leading to a lack of basic necessities like water and electricity, saw improvement in the days before the exhibition.

The road to the Damascus International Airport went through a transformation with trees being planted, cleaning campaigns and lights being installed prior to the exhibition. The airport itself also underwent repairs and upgrades to its amenities and security so that it is now equipped with new surveillance cameras and inspection devices, screens, flight schedules, and air conditioning systems.

The head of the Damascus Chamber of Industry, Samer el-Debs, told AP:

This comeback is an indication that the war in Syria is coming to an end… after all what happened, all the economic sanctions against Syria and systematic attempts to destroy Syria, we see that this fair has been reopened.

In the days preceding the exhibition, the Syrian pound’s exchange rate rose against the US dollar, which the Damascus Center for Research and Studies linked to the return of the fair and the re-entry of Syria into the trade and economic market.

Syrians who do not support the Assad government largely viewed the fair as a cynical public relations event.

According to Syrian economic analyst Abdel Nasser AlJassem, the return of the fair counts as yet another one of the “beautification steps” that the regime is taking to promote a sense of stability and portray the economy, especially the industrial sector, as doing well.

But reality contradicts this, Al Jassem wrote on Al Araby. According to the regime itself, 80% of industrial facilities have stopped, and Syria is importing even the most basic food and consumer goods. 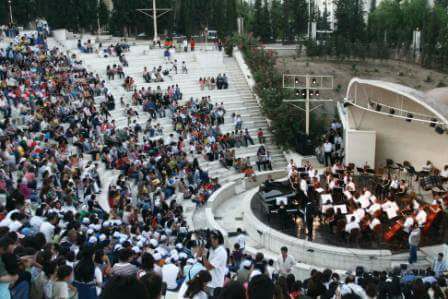 The regime made a big push this summer to assert the return of stability and the defeat of “terrorism” in the country in an effort to put Syria back on the map economically. The Ministry of Tourism launched several campaigns to encourage travel to coastal towns and to war-ravaged Aleppo by promoting videos of clubs and parties in the city. The campaigns paint these areas as ‘secular’, ‘westernized’, and glamorous.

And a new open-air amphitheatre was recently built by the Ministry of Culture at the Dummar Cultural Complex in Damascus. It was made to resemble Bosra’s well-known Roman amphitheatre and fits up to 3,000 attendees. The theatre is meant to host several festivals, plays, opera nights and musical concerts. Tickets for each event will be priced at 1,000 Syrian pounds, equivalent to 1.93 US dollars at date of posting, to attract as many attendees as possible.

During the fair’s opening ceremony, Syrian Prime Minister Emad Khamis gave a 15-minute speech announcing a “new season of victory” explaining that the reopening of the exhibition proves that “the will of Syrians for life was and still is stronger than terrorism… [that] it is the victory flag of life over murder, honesty over treason, right over wrong and sovereignty over dependency.”

‘Post-conflict reconstruction that does not address critical questions…is unlikely to be stable.’

Critics view the reconstruction attempts not only as a way for the Assad government to push towards economic recovery and social repair, but as a way to re-assert their power, reward loyalists and punish the opposition.

Assad himself gave a speech on August 21, 2017, saying that Syria has “lost its best youth and its infrastructure,” but has “won a healthier and more homogeneous society”.

Azmi Bishara, a prominent Arab intellectual and political analyst, criticized Assad's statement as “Hitlerian“, interpreting it to mean Assad confirming that genocide and displacement are core doctrines of the regime. He tweeted:

Assad: “We lost many of our young men and infrastructure but we gained a healthier and more homogenous society”. An explicitly Hitlerian sentence proving that genocide and displacement are official regime doctrines.

To Swiss-Syrian writer Joseph Daher, this represents the result of the international community prioritising the so-called war on terror. In an extensive analysis for independent news site Syria Untold, he wrote:

This is the culmination of the focus of the major international and regional state actors on the “war on terror”, and consensus around Bashar Al-Asad remaining in power, both of which have strengthened the confidence of the dictator and the ruling class in Damascus.

This is the future Assad is promising to locals in Syria: Be part of homogenous society built by murder, displacement & on-going losses.

How can we who want other society, a heterogeneous space, to resist the violent disciplining machinery of the state?

The answer lies in the principles and priorities that guide early recovery and post-conflict reconstruction. Not surprisingly, where these are designed to mitigate the grievances and governance failures that caused mass violence, prospects for recurrence go down. Where they are likely to amplify pre-war grievances and failures, prospects for recurrence are much higher. Everything we know about the Assad regime’s approach to reconstruction confirms that it will aggravate the factors that drove millions of Syrian citizens into the streets in 2011, and then into an armed uprising. Post-conflict reconstruction that does not address critical questions of institutional legitimacy and capacity, or provide for citizen security, justice, and political inclusion, is unlikely to be stable.

Opposition website Enab Baladi made the same point, arguing that the Damascus International Fair didn't even succeed at providing a flawless spectacle. Journalists were not allowed to attend the fair, the prime minister's speech “provoked media uproar because of spelling, grammar and pronunciation mistakes” and a truck was forced to take back dozens of attendees after their bus didn't show up.