What's Behind the Success of Satirical Media in Hong Kong? 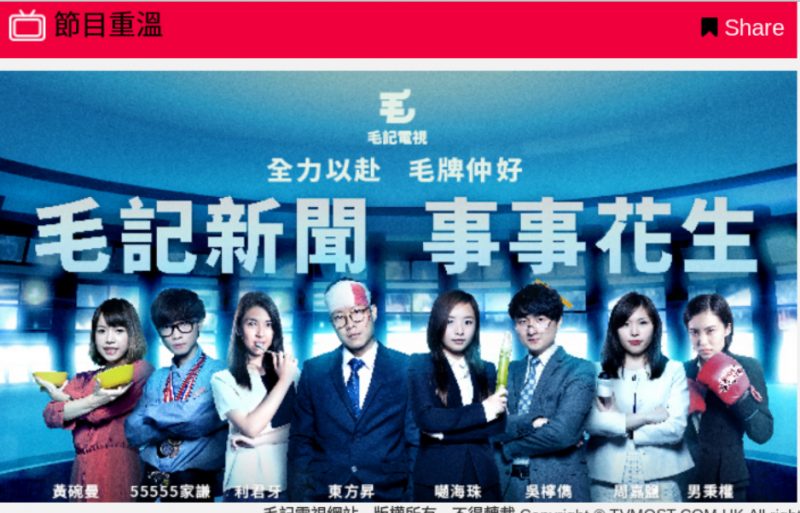 For years, Hong Kong's media industry has struggled to turn a profit in the digital age and maintain editorial integrity at a time when free expression is increasingly under pressure. In fact, cases of conventional organizations successfully pivoting toward a digital-first business models has been very rare and the initial public offering (IPO) application of satirical outlet 100 Most is one of the rare cases.

On July 26, Most Kwai Chung Limited, the operator of popular satirical media outlets TVMost, a online video outlet, and 100Most, a Chinese magazine with a Facebook outlet of more than 1.1 million followers, submitted draft listing documents to the Hong Kong Stock Exchange.

The IPO application revealed that between 1 April 2016 and March 31, 2017 the company brought in HK$95 million (approximately US$12.15 million) in revenue — the majority of which originated from digital media advertising — resulting in a gross profit of HK$58 million (approximately US$7.42 million). That represented a 74 percent increase over the 2015-2016 financial year.

The company was founded by three young people, Roy Tsui, Chan Keung and Bu, in January 2010 with less than US$1,000 in start-up funding.

Though the media company positions itself as an advertisement production house, it has accumulated a following through viral content that satirizes current affairs with a pro-democracy or “localist” political slant (localist refers to the movement which promote local values and culture over those of mainland China). In fact, the Chinese name of its two media outlets, “Most” or “Mou Gei” (毛記), is a parody of the city’s mainstream television station Television Broadcast (TVB) or “Mou Sin” in Cantonese. A number of its popular programs, including a daily three-minute satirical newscast, are also parodies of TVB’s programming.

The success of the TVMost and 100Most has stirred some online discussion. Some netizens says that other journalistic sites should learn from Most’s business model to survive in the market. However, others see them as high-quality content farms and are worried that the curation of entertainment and news into viral content could further curb the space for serious journalism.

Investigative journalism platform Initium organized an online discussion about Most’s new media business model. Below is a selection of the comments.

I believe that Most100 is youthful and funny news media. It has provided young people who are under a lot of pressure to make it in life with a new possible [career path].

@sixstrings was also in favor of Most100’s satire and explained the socio-political context of its success:

The culture of spoofing and political parody has local roots. The three founders had the experience in working at Hong Kong Television and Radio Broadcast [a Hong Kong government-funded broadcaster] in the production of parodies, perhaps there they developed their sense of a popular strategy to engage with current affairs and attract audiences.
I don’t think Most100 has led the public discussion, or at least it does not seem to have such intentions. It just is situated in political entertainment. Probably even the founders had not anticipated such success. The reason why Most100’s parodies are so popular is related to the reality that people cannot change society and so they can only take pleasure in satires.

We are now in era of internet and mobile communication, people think content should be free and should not be paid for (unlike the conventional newspaper). However, when they come across content that is not free, they look for a substitute. […] Gradually, the digital media sector has come to depend on page views for advertising income. […] In order to boost page views, tactics that rely on entertainment, sensational headlines, pornography among others are used to package news […] The success of Most100 reflects popular tastes […]
While Most100’s content is parody of current affairs hot topics, gradually, the public sees Most100 as alternative news and consumes the content as “news” […] This is not a good development for journalism.

Lam Yin Bong, a media worker, argued in Stand News, a non-profit media outlet, that people should not mix the business of new media production with journalism:

We could say that the news media has not found its way. That does not mean that the success of Most100 is something that news media can or should learn from.
First of all, Most100 (and other similar platforms) has simplified and sensationalized news. We can consume the parody as entertainment but should not see it as a source of news information. Secondly, its marketing strategy of remixing others’ information as content is at odds with news media which positions itself as the watchdog of society by digging up first-hand news sources. Thirdly, being old school, I cannot imagine any news media taking up the role to help corporations develop ideas for selling their product.