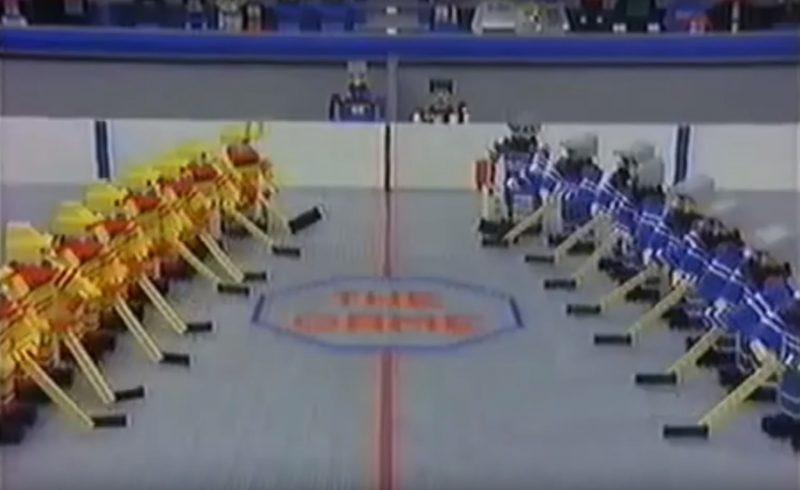 A screen shot from a 1986 LEGO sports cartoon produced in Hungary.

Decades before the Lego Movie become a global blockbuster, a studio in Communist Hungary was using LEGO bricks to make high-quality animated cartoons.

In 1986, Budapest-based Vianco Studio released a series of seven shorts using all brick-built characters and offering a humorous take on hockey, figure skating, soccer and other sports. According to MAKE magazine, this was “the oldest known official LEGO stop-motion release.”

At the time, these animations were aired by national television channels across Europe. They were also released on VHS tapes, which some fans have since digitized, allowing the cartoons to enjoy a stable YouTube following.

All the characters in these animations are made with “classic” Lego bricks, and do not feature any figurines. They showcase Lego's creative potential in its most basic version and help explain why the brand has been an inseparable part of the childhoods of millions of people the world over.

Vianco Studio continued to function after the shorts were released, and according to IMDB participated in the production of the 1988 movie Felix the Cat.

LEGO after the ‘Iron Curtain’

In recent years, LEGO had been a recipient of Hungarian government subsidies slated for foreign direct investors. In 2006, the country's cheap workforce and strategic geographic location persuaded the Danish company to take out a lease on a factory in the Eastern town of Nyíregyháza. Production began in 2008.

In 2014, Hungarians built the world's tallest LEGO tower in Budapest, with a height of 34.76 meters (114 feet), a record broken the following year by a group of Italian builders, whose effort reached 35.05 m.

The same year Hungary broke the tower record, LEGO opened a new factory in Nyíregyháza, which was inaugurated by Prime Minister Viktor Orban. In 2015 LEGO announced it would double the size of that plant, in order to meet high demand for its products. The expansion is being supported with a grant of 4.4 billion Hungarian forints ($17.75 million) from the Hungarian government.

This February, Nyíregyháza's mayor Ferenc Kovács whetted local LEGO-lovers’ appetites when he announced that a Legoland Discovery Center would be completed in the city by 2020. But the populist promise was soon met with skeptical responses, including from LEGO franchise operator Merlin Entertainments, who stated that it has no plans to establish such a center there.

If there were any truth to the mayor's claim — which he has since admitted is at best a proposal being prepared for Merlin's review — it would be the first Legoland Discovery Center in Eastern and Central Europe.