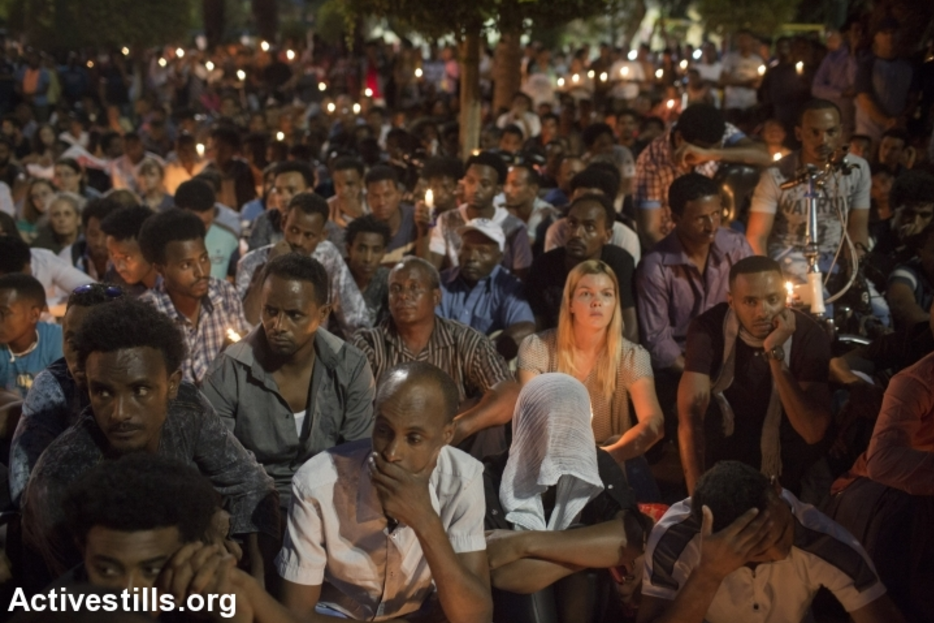 Members of the Eritrean community in Israel mourn on October 21, 2015 in Levinsky park in south Tel Aviv during a memorial ceremony for Eritrean asylum seeker Habtom Zarhum, who was shot by an Israeli security guard at a bus station in the southern city of Beersheba after being mistaken for an assailant in an attack that killed an Israeli soldier. Zarhum, who was kicked by an angry mob after being shot, will not be recognised as an official victim of terrorism. Source: Oren Ziv/ActiveStills

Netanyahu was not speaking about the wall along the West Bank border, which violates international law according to the International Court of Justice, and is therefore informally known as ‘the Apartheid Wall‘ in Arabic (جدار الفصل العنصري) and by opponents of the Israeli government's policies. He was referring to another ‘wall': the approximately 152-mile-long (245 kilometers) fence on the border with Egypt, codenamed ‘Hourglass’ or Sha'on HaHol (שְׁעוֹן הַחוֹל) in Hebrew, on which construction began on November 22, 2010 and finalized on January 18, 2017.

The purpose of the ‘wall’ that Netanyahu boasted about? To keep African asylum seekers out.

As 972mag, the Israeli-Palestinian news collective, wrote on its special coverage page for “Asylum Seekers in Israel”:

There are tens of thousands of African asylum seekers in Israel, mostly from Eritrea and Sudan. Israel cannot deport nationals from those countries, but is pursuing a string of measures to stop new arrivals and encourage those already here to leave.

Indeed, Israel categorically refuses to even look at their asylum claims. One Sudanese asylum seeker, who said he was tortured by the Sudanese regime before fleeing to Israel via Egypt, has been waiting since December 6, 2005:

I was 17 years old when my village, Smasm, in the South Kordofan province of Sudan’s Nuba Mountains, was attacked. Most members of my family were killed in that horrible attack, which was the beginning of the suffering I have endured until today. I was arrested. 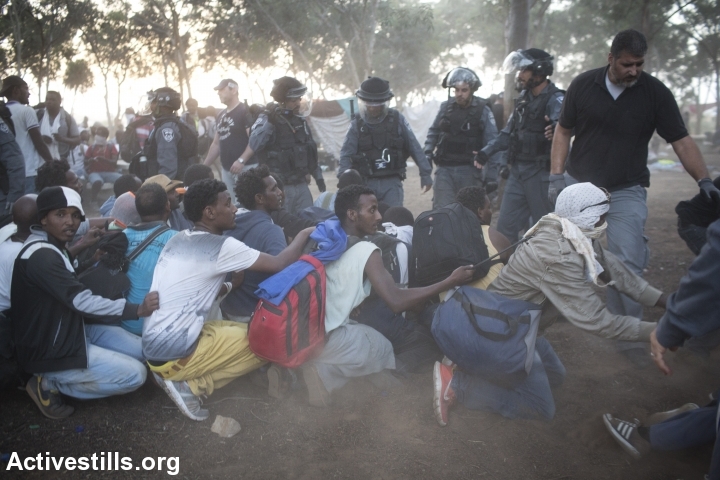 “March For Freedom” camp on the Israeli-Egyptian border on June 29, 2014, Negev Desert, Israel. Israeli policemen and immigration officers arrest African asylum seekers near the Israeli Egyptian border, forcing them back to imprisonment. They had marched from the Holot detention center, where they were jailed, to the Israeli-Egyptian border to protest of Israel's asylum policies, calling on the UN and the Red Cross to intervene and saying Israel is not checking their asylum requests and they therefore seek to leave the country. The group was stopped by the Israeli army and spent the night in a forest located a few hundred meters from the border. Source: Oren Ziv/ActiveStills.

The Israeli government offers cash to these ‘unwanted African migrants,’ as the BBC called them, and sends them to a ‘safe’ third country, but two men who took up the offer recently told the BBC that upon arrival, they “were abandoned as soon as they got off the plane. One was immediately trafficked, the other left to fend for himself without papers.”

Netanyahu tweeted his support for Trump's wall a day after International Holocaust Remembrance Day, and the ‘illegal immigration’ he was talking about were in fact to asylum seekers fleeing violence, oppression and in some cases genocide. As Asher Schechter wrote for Israel's Haaretz:

[…] The sad historical irony that of all nations, the one bragging about his success in turning away survivors of genocides and brutal dictatorships one day after International Holocaust Day is none other than the Prime Minister of Israel. You know, that country that owes its very existence to the plight and suffering of the victims of the greatest genocide in modern history.

This touches on a major aspect of the border fence that is rarely mentioned, although fairly obvious: the fact that it is yet another component of Israel's highly racial and sectarian politics.

Indeed, the border, as Asaf Calderon wrote recently for 972mag, “is only aimed at preventing black people from entering Israel irregularly.”

This should come as no surprise given the prevalence of anti-African rhetoric in Israeli politics. To give but a few examples, in October 2009, then-Interior Minister Eli Yishai told Israel’s Channel 2 that African asylum-seekers “will bring with them a profusion of diseases: hepatitis, measles, tuberculosis, AIDS and drugs.” In May 2012, Likud Member of the Knesset Miri Regev, who was the spokeswoman of the Israeli Defense Force (IDF), told a crowd of thousands of Israelis that African asylum-seekers “are a cancer in our body.”

In 2013, Member of Knesset Michael Ben Ari told a crowd, a year after he helped provoke a race riot in the southern Tel Aviv neighborhood of Hatikva:

A poll published by Israel Hayom (Israel Today) in January 2014 showed that “61.3 percent of Jewish Israelis believe the best way to deal with the recent phenomenon of illegal immigration from Africa is to sent the illegal migrants to a third country immediately” and a “further 18.4% think they should be sent back to the Holot open detention facility with arrest as a penalty for those who do not agree to go.” The poll added that “11.6% think the migrants should be given the opportunity to live and work in Israel.” 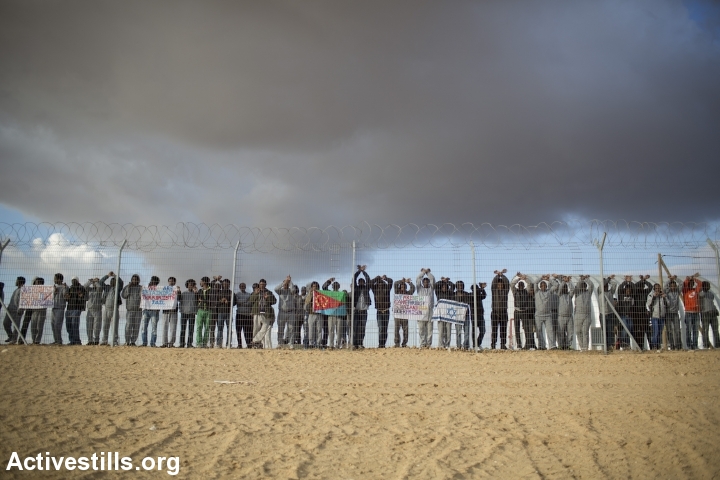 In contrast, Israel, as the world's only ‘Jewish State’, considers any member of the Jewish faith anywhere in the world as automatically deserving of Israeli citizenship. This is due to the 1950 Law of Return, declared just two years after the establishment of the State of Israel and the Palestinian Nakba (Arabic for ‘catastrophe’) in which approximately 700,000 Palestinians were expelled from their homes in the territory that would become Israel.

The Law of Return (1950) grants every Jew, wherever he may be, the right to come to Israel as an oleh (a Jew immigrating to Israel) and become an Israeli citizen. For the purposes of this Law, “Jew” means a person who was born of a Jewish mother, or has converted to Judaism and is not a member of another religion.

Mexican Jews to Netanyahu: ‘You do not speak for us’

Unsurprisingly, Netanyahu's tweet did not go well with many Mexicans. Voices from Mexico's 50,000-strong Jewish population were particularly critical. The Central Committee of Jews in Mexico condemned Netanyahu's comments in an open letter:

The Jewish Community in Mexico disavows itself from Israeli Prime Minister Benjamin Netanyahu's message regarding the border wall. We do not agree with him in this point of view and strongly reject his standing. […]

We stand with our fellow citizens who live, work and add value to the neighboring country, their human rights have to be respected at all times and they have to be treated with dignity.

Salomón Chertorivski Woldenberg, the current secretary of economic development in Mexico City, and himself of Jewish origins, responded on Twitter, first in Spanish with an English translation to follow:

@netanyahu your ignorant tweet is offensive to Mexico, a country whose tolerance, solidarity,and opportunity has welcomed families like mine https://t.co/fe2XeKSGOE

León Krauze, a writer and professor, agreed with Chertorivski:

As a Mexican Jew, I am ashamed of this tweet.

@PresidentRuvi: as the state head of Israel, I ask you, as a Mexican, to correct the position of PM @netanyahu about a wall in our border

Netanyahu's support for Trump and the wall shows in all its meanness how low the Israeli prime minister has reached. Shameful.

The link between the Israeli wall and Trump's wall is not coincidental. Countries from India to the US have sent experts to Israel to study border security and the various technological tools used by Israel to keep African asylum seekers out. Furthermore, Magal Security Systems, the Israeli company that built Israel’s border with Egypt – which Prime Minister Benjamin Netanyahu referred to on his infamous tweet – is seeking to build Donald Trump’s planned wall between the US and Mexico, according to Bloomberg news agency.

The relationship between Israel and security experts throughout the world is itself nothing new. In 2002, five New York Police Department (NYPD) officers were sent to Israel to be trained in counter-terrorism measures and in 2012, the NYPD opened a branch in the Sharon District Police headquarters in Kfar Saba.