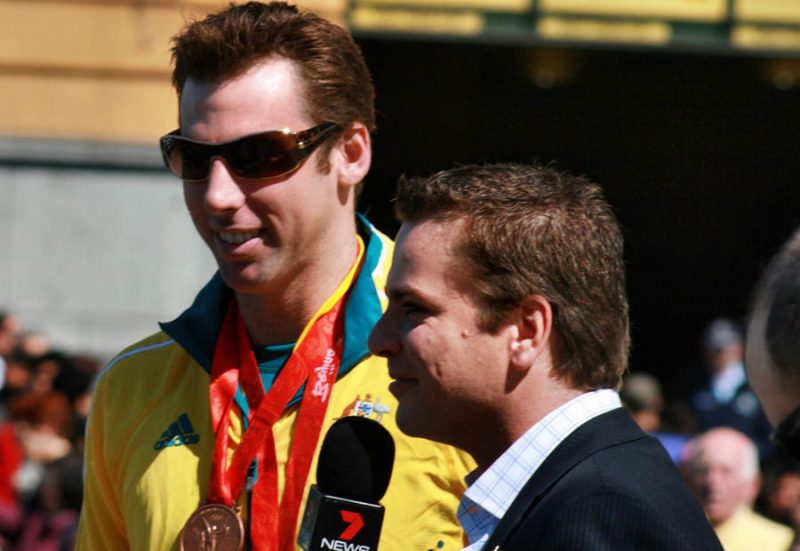 The public meltdown of Australia Olympic gold medal swimmer Grant Hackett triggered frenzied coverage in both the mainstream and social media. The Australian media have copped considerable criticism for their approach.

Grant Hackett has been a national icon since his 1500 metres freestyle victories at the 2000 Sydney Olympics and the 2004 games in Athens. He has held a number of swimming world records and retired in 2008. He made a much-publicised comeback at the 2015 World Championships but was not selected for the 2016 Olympic team.

Hackett's issues with medication, mental health and his family have been public knowledge for some time. The latest controversy began with Hackett's arrest on February 15 following a ruckus in the home where he was living with his parents. Even the Australian Swimmers’ Association general manager and fellow swimming competitor, Daniel Kowalski, responded strongly to the news:

Some tweeps had much harsher judgments. This tweet compared Hackett with former Australian Football League champion Ben Cousins whose drug-related incidents are notorious:

However, Collezione Santina's sympathetic tweet was more typical of the social media response:

#GrantHackett you're important to all of us. you're greatness is in our memories. All our doors and homes are open to you. #areyouok

Hackett had added fuel to the chatter about conflict with his family in January with his own very public contribution. Jessica Dietrich was not the only journalist to re-post this photo from Hackett's instagram account.

Grant Hackett: “My brother comments to the media… but does anyone know he beat the s**t out of me” @7NewsSydney @Y7News pic.twitter.com/X5IKpxkM9a

The role and responsibilities of the media, both old and new, have been a focus of much of the online commentary:

#grantHackett typical Australian media, the guy give his life to make Australians proud now they abandon him and make fun of the hero

Members of the mental health community such as John Mendoza have similar requests:

What is going on? Grant Hackett the lead story on @abcnews. Media leave the family alone. #Mentalhealth is a personal matter. Not public

The hypocrisy of the media…advocates supporting mental health & promoting awareness..but hounding Grant Hackett down the street 😒

Media: Please consider the impact of sustained coverage on the #mentalhealth of a celebrity – important to be respectful #GrantHackett pic.twitter.com/fxU24SHz6E

Regrettably, the private family problems continue to be played out in the public arena. Dave Thomson is clearly unimpressed: