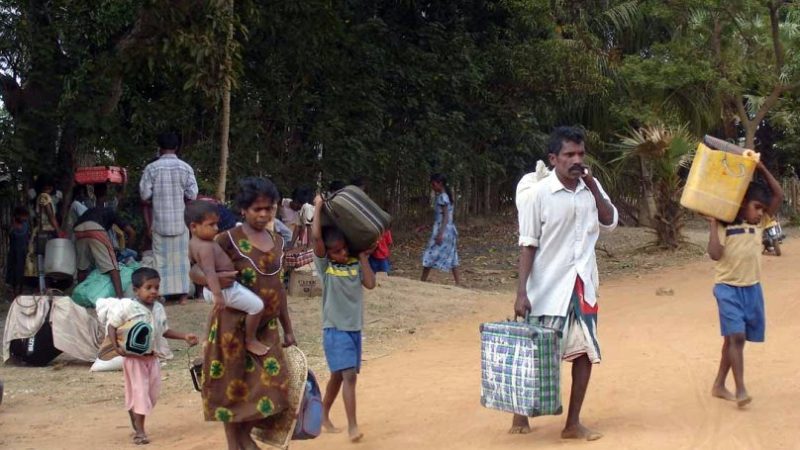 IDPs in the north of Sri Lanka carrying the possessions. Image from Flickr by trokilinochchi. CC BY 2.0

Feb. 9 marks the tenth day of protests in Keppapulavu, a village in Mullaitivu, situated on the north-eastern coast of Northern Province, Sri Lanka, where residents are demanding the return of their land. Prime Minister Ranil Wickremesinghe is meeting with representatives of the Keppapulavu protests, but the struggle for the return of their land has been going on for years.

More than seven years have passed since the end of a civil war. Still, though, as many as 200,000 troops remain stationed in the Tamil-populated north. They occupy significant amount of land belonging to locals, who were driven from their homes during the war, supposedly because of national security needs.

Dozens of families in Pilavukkudiyiruppu village, in Keppapulavu of Mullaitivu, have been protesting in front of an Air Force camp, demanding the return of their 25-acre lands, which the military currently occupies. Families have been waiting to return to their homes since the final phases of the war in 2009.

The displaced residents of Keppapulavu were reportedly warned not to protest, as President Maithripala Sirisena was scheduled to visit the area.

Ahead scheduled visit of @MaithripalaS today/25, 59 Div in Mullaithivu warned Keppapilavu residents not to stage protests or any agitations pic.twitter.com/8EWagv9sUX

President Sirisena did not visit Mullaitivu due to poor weather, though a ceremony was held to transfer some land. Local displaced persons, however, say the land isn't the same area they inhabited previously.

In response, protesters have demanded the right to resettle on their original land. The villagers initially held a protest on Jan. 25.

On Jan. 31, the villagers protested through the night.

Mullaitivu Keppapilavu residents protest all over the night; demanding to access their land. #lka #tamil pic.twitter.com/GOYvZO2LhN

Villagers said they will continue their protest until Air force return their lands belong to them in Pilavukudiruppu in Karaithuraipattru DS pic.twitter.com/dzJdZqYZad

“We have lost everything.We have been running away(being displaced continuously) for long time, when will we return to our homes/lands?” pic.twitter.com/QCq8Oi4lON

“They uprooted us from our land &now made to resettle in cemetery land!'a women protester in #Keppapulavu detailing displacement tragedy 1/2 pic.twitter.com/a8G8xotRBk

The military reportedly tried to pressure the demonstrators into stopping the protest.

Nearby electricity/drinking water facilities stopped by military;courageous women take turns in middle if protest to see their families 2/2

Protestors-most of them are women with families spending the night in front of military camp;very cold weather prevails in the area #lk pic.twitter.com/kfutVY5wFp

Day6: #Keppapilavu women protesters are sitting around a fire to survive the cold in early morning today pic.twitter.com/c0nk5p7YIp

Some dubbed the country's Independence Day a “Black Day”:

Many children in Keppapulavu also joined in the protest.

Children in Keppapilavu drum out their own #protest song – ‘#SriLankan army leave our land’. #Resistance is in our blood. #Tamil #music pic.twitter.com/BGDh2LfHDg

As the demonstrations continued, the story gained more mainstream media coverage, as well.

Activists from the south of the country also visited in solidarity.

For nine days, there was no official government response, apart from local politicos such as Chief Minister Wigneswaran and the Mullaitivu GA who visited the protesting residents and expressed support.

Matters finally came to a head when TNA MP M A Sumanthiran raised the matter in parliament.

Is Govt apathy to protestors in #Kepapulavu 10 days into agitation for their lands due to their ethnicity? @MASumanthiran asks in P'ment

Private bus owners strike & Govt responds in 24hrs. #Kepapilavu land protest in day 9, yet this does not move u in the least:@MASumanthiran

2/ However, @RWijewardene said some arrangement cld b made re land ppl were protesting abt as well & agreed to meet to discuss this tmrw.

Prime Minister Ranil Wickremesinghe then met with representatives from Keppapulavu on Feb. 9.

The military meanwhile has asked displaced families to provide copies of their deeds, posing a problem for those who do not have these documents.

Military Spokesperson says Air Force is willing to return lands belong to #Keppapulavu residents if they can prove their ownership 1/3 pic.twitter.com/iRJ6HcT7DH

UPDATE: Following a meeting with the families, Prime Minister Ranil Wickremesinghe reportedly asked the military to relocate its camp. The Keppapuvalu residents welcomed the decision, but said that they would continue protesting until their land was returned.

At High Level meeting on #Keppapulavu today @RW_UNP instructed military to shift their camps from Pvt lands to nearby Forest/State lands 1/2 pic.twitter.com/3MpvUxVjvT