Dissent and Solidarity: When Iran Mourns One of the Fathers of Its Revolution 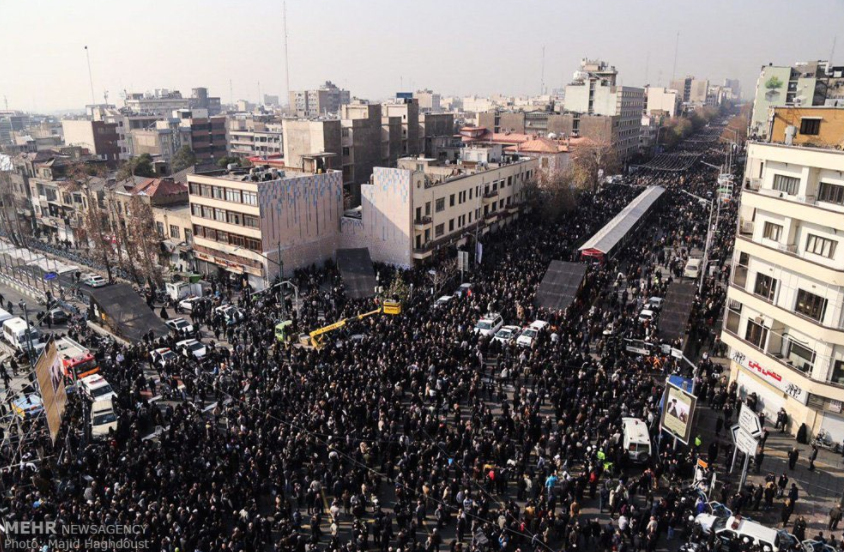 Massive crowds gathered in Tehran on January 10 to bid farewell to a founding father of the Islamic Republic, Rafsanjani, as well as to express dissent and solidarity with some of the reformist-leaning positions that the former president took at the end of his life. Image from Mehr News Agency photographer Majid Haghdoust, published with intent to redistribute.

The death of Ali Akbar Hashemi Rafsanjani is shaping up to be one of the most significant events in Iran in several years. In numbers perhaps not seen since the Green Movement protests against the 2009 election, millions of mourners turned out for his funeral procession. Some took the opportunity to speak out against political persecution.

Rafsanjani was one of the fathers of the 1979 Islamic Revolution and one of the closest advisers to the founder of the Revolution, Ayatollah Khomeini. He would go on to become the Islamic Republic's 4th President following Khomeini's death. His legacy is besmirched with some of the darker days of the Revolution, where mass executions of political prisoners and assassinations riddled the nation. However, like many paradoxical elements of Iran's history and culture, Rafsanjani would also become a figurehead for reform and moderation.

Once outside of office and positions of power, Rafsanjani was known for his support of the 2009 Green Movement in opposing the election results. He was also known as one of the only figures who could bridge the demands of reform and moderation to the country's hardliners, especially through his friendship with Ayatollah Khamenei, whom he helped elect as Supreme Leader in 1989.

Their relationship has been defined as a “friendship-cum-rivalry,” for Rafsanjani's moderation and pragmatism challenged Khamenei's more ideological stances. Rafsanjani was known as a “mentor” to current moderate President Hassan Rouhani, especially in helping build consensus around issues such as opening ties up with the U.S. and the West. Pushback from Khamenei and hardliners on these issues with Rafsanjani's absence is expected to become more difficult.

Regardless of the disagreements however, across almost all political factions in Iran — conservative, reformist, and moderate — Rafsanjani's legacy was largely celebrated. A scan of some of the front pages of newspapers on January 10, the day of the funeral, showed a typically divided political landscape (represented in the different factions behind the newspapers) that came together to embrace Rafsanjani's legacy in Iran.

This was not decidedly the case in diaspora media, which did not shy away from highlighting the bloodier elements of Rafsanjani's past. Shargh newspaper, a popular reformist newspaper in Iran, with a history of being banned by authorities, was one of the few to make a subtle allusion to Rafsanjani's darker side, with the headline “The Keeper of Secrets.” 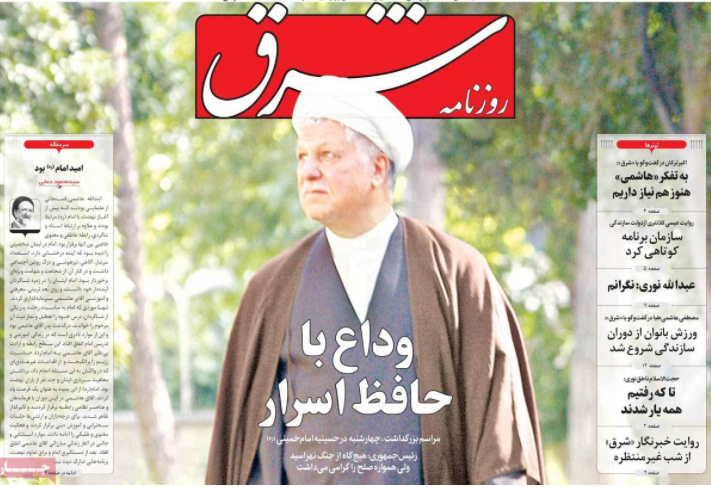 Shargh, one of Iran's most well known reformist newspapers, ran the headline “Farewell to the Keeper of Secrets,” in a subtle allusion to some of the politician's work in the early days of the Islamic Republic.

Popularly, Rafsanjani was linked to the Chain Murders, a series of assassinations by Iranian government operatives of dissident intellectuals, including writers, journalists, translators, political activists and ordinary citizens, between 1988 and 1998. In 2000, investigative journalist Akbar Ganji identified Rafsanjani as one of the principal figures behind the assassination in his book His Red-Robed Highness. Rafsanjani's role and knowledge of the Chain Murders is thought to be one of the many secrets of the Islamic Republic that were buried with him.

Hardline newspaper Kayhan, the reformist newspapers of Etemad and Hamshahri, as well as the moderate Iran newspaper, however, all took on a clear and decidedly mournful tone to their front covers on the day of his funeral. 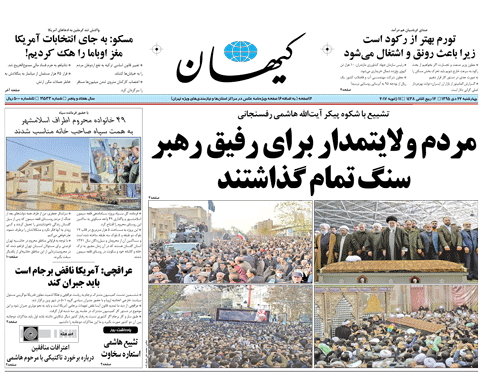 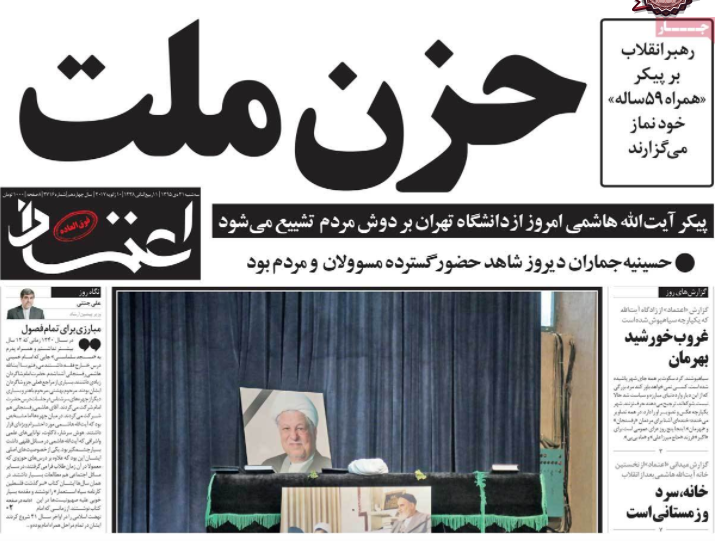 Etemad, a reformist newspaper that has faced censorship from the judiciary and the Press Supervisory Board, and is generally seen as the newspaper of Iran's liberal-minded intellectuals, wrote ” The Sadness of the People.” 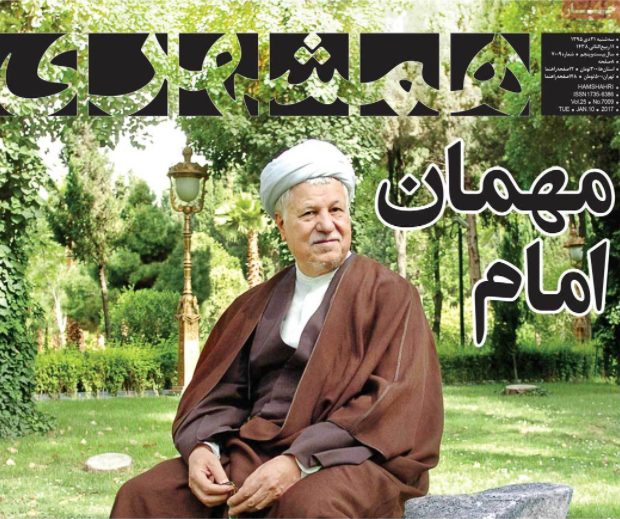 Hamshahri newspaper, known to sympathize with the reformist former President Mohamad Khatami, ran a cover simply with “the guest of the Imam,” in reference to Rafsanjani's close relationship with Khomeini. 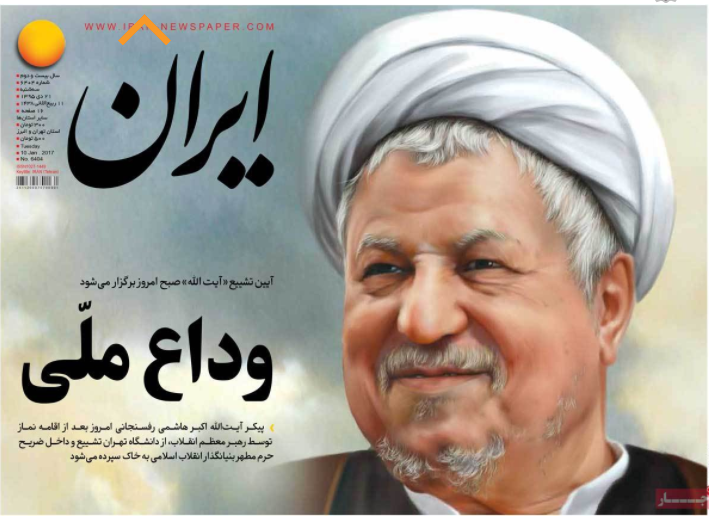 The government affiliated (moderate) Iranian newspaper ran a simple a headline of “A national farewell” for the day of his funeral procession.

An estimated 3 million Iranians poured into the streets on January 10 for the funeral as the day was turned into a national day of mourning. Many turned the public gatherings into an opportunity to voice dissent regarding the jailing of political prisoners, Iran’s relationship with Russia, and frustration at the notoriously biased state broadcaster, Islamic Republic of Iran Broadcasting (IRIB).

IRIB, which holds a monopoly over television broadcasts, appeared to be avoiding coverage of the funeral, perhaps in an effort to avoid documenting public dissent.

Such an embarrassing day for #Iran‘s state TV, anytime people saw the #IRIB crews, chanted slogans against them #oF24 pic.twitter.com/Txn42CUeG2

Several politicians, including the current moderate President Hassan Rouhani and the Supreme Leader, took center stage in the ceremonies commemorating Rafsanjani. The popular reformist former President Mohammad Khatami, who is currently under a media ban, was barred from attending, however. Chants in support of Khatami became a noticeable feature of the funeral.

At Rafsanjani's funeral in Tehran now the pro-reform crowd is chanting:
“The will of Hashemi (is)
Supporting Khatami” pic.twitter.com/KyCU8APu5r

Solidarity with the Green Movement leaders was another notable hallmark of the event.

At Rafsanjani's funeral in Tehran now the crowd is chanting for 2009 Green Movement leader who is in house arrest: “Ya Hussain, Mir Hussain” pic.twitter.com/UczyCuNRNi

Some Iranians said the internet was jammed or slowed when connecting from the funeral and throughout Tehran. It is unclear whether this was tied to government efforts to stifle dissent, or due to increased internet traffic.

Defiant female Iranian mourner at #Rafsanjani‘s funeral asks why authorities have cut off access to Internet and their phones at gathering pic.twitter.com/0GlRWYjw74