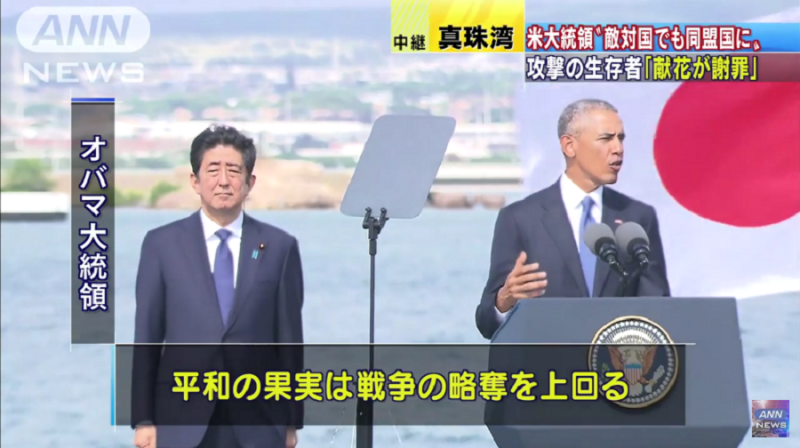 (CAPTIONS) President Obama at Pearl Harbor: “The fruits of peace outweigh the plunder of war… The most bitter of adversaries can become the strongest of allies.” Screencap from ANN official YouTube channel.

On Tuesday, Dec. 27, Japanese Prime Minister Shinzo Abe visited Hawaii to observe the 75th anniversary of Japan's attack on the U.S. naval base at Pearl Harbor on Dec. 7, 1941. Abe's visit, with its theme of reconciliation, is seen as a response to U.S. President Barack Obama's historic visit to Hiroshima earlier in 2016, as well as an effort by the Japanese government to cement ties with the incoming President-elect Donald Trump.

Abe is the first trip by a Japanese prime minister to Pearl Harbor since a trio of Japanese prime ministers visited the site in the 1950's including Abe's grandfather, Prime Minister Kishi Nobusuke. The Japanese surprise raid on Hawaii in December 1941 resulted in more than 2,400 American deaths, including 1,177 officers and crewmen who still remain entombed in the submerged hulk of the battleship USS Arizona.

Outgoing American President Barack Obama and Abe Shinzo addressed an international audience from the Arizona Memorial, which lies above the remains of the battleship in Pearl Harbor. The transcripts of both speeches are available online, and feature themes of peace and reconciliation between the two countries.

POTUS alongside Japanese PM at Pearl Harbor: “I hope…we send a message to the world that there is more to be won in peace than in war.” pic.twitter.com/zMfdJFdGpL

There was some question about who Prime Minister Abe's intended audience might be. Keiko Tsuyama, a New-York-based freelance journalist who regularly reports on the U.S.-Japan relationship for major Japanese news outlets, and who attended the ceremony at Pearl Harbor, wondered why Abe chose to conduct his address in Japanese:

I don't understand why PM Abe did his speech in Japanese when he and @POTUS Obama sent their message to the world! https://t.co/gVO3SS4N5n

It's possible that Abe intended to communicate with a domestic Japanese audience, to demonstrate he is doing all that he can to ensure Japan and the United States continue to enjoy a close relationship once outgoing President Barack Obama departs from office in January.

Some commentators interpreted Abe's visit as one of pragmatism, rather than as a messenger for peace.

Writing for the Japan Times, Stephen Nagy, a Japan observer remarked, “There is little doubt that geopolitics associated with the deepening Sino-Japanese rivalry is the primary motivation for Abe’s visit to Pearl Harbor.”

Other commentators noted that Abe's speech at Pearl Harbor made no mention of the actual events of December 7, 1941, when Japan, which had already been at war with China since 1931, not only launched a surprise attack against Pearl Harbor, but also against European colonial possessions all across Southeast Asia.

Abe at Pearl Harbor speaks of “a war that commenced in this very place.” So the war didn't begin in Manchuria in 1931 or north China 1937?

Also, PM Abe, “a war that commenced”? How did it commence? Did war occur all on its own, without human agency or responsibility?

Tsuji Seiichi, who sits in Japan's National Diet as a member of the Communist Party, had a more ironic take on Abe's visit to Honolulu, taking issue with the perception that Japan has neither apologized nor atoned for starting the war in the first place.

Prime Minister Abe delivered an address at Pearl Harbor. However, “power of reconciliation” cannot begin without (true) apology and reflection from the aggressor. “But everyone *says* I love you!”

On Japanese Twitter, the hashtag “the power of reconciliation” (#和解の力) trended during Abe's visit.

Some Japanese netizens had fun with the hashtag, such as one Twitter user who uploaded a photo to show that, just like the U.S. and Japan, Arnold Schwarzenegger and his nemesis from the 1987 film, Predator, managed to become friends, too: