No Apologies, But Most Japanese View Obama's Historic Visit to Hiroshima Positively 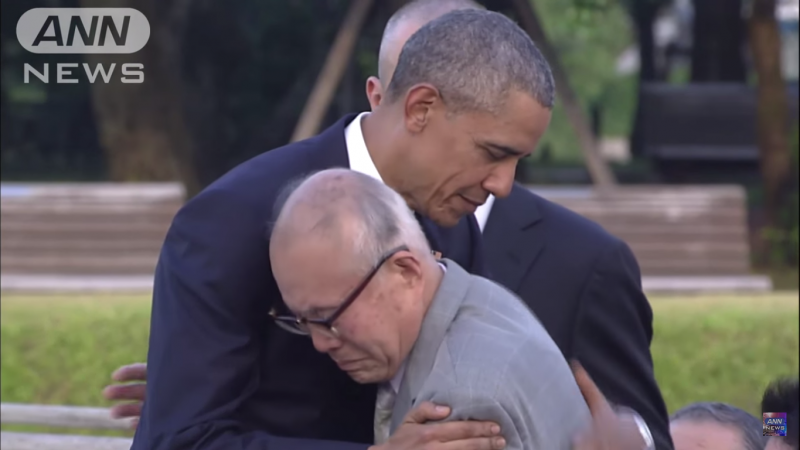 Following President Barack Obama's historic visit to the Hiroshima Peace Memorial Park in Japan on May 27, a nationwide poll conducted by Kyodo News showed that 98% of Japanese respondents viewed the American president's visit to Hiroshima positively. In the poll, 74.5% of respondents accepted the fact there was no apology for the 1945 atomic bombings.

This was the first time a US president had visited Hiroshima since the city was destroyed by an American atomic bomb on August 6, 1945.

While there was some debate that Obama's visit to Hiroshima was intended to be an apology for the destruction inflicted on Hiroshima, the president's trip was intended to recognize what had happened more than seventy years before, and also make a plea for nuclear non-proliferation.

About 30% of the population of Hiroshima was killed by the blast the subsequent firestorm that raged through the city. At least 140,000 people would die as a result of the bombing by the end of 1945.

The sheer scope and violence of the destruction that occurred at Hiroshima, and then again three days later at Nagasaki on August 9 has ignited a debate about whether or not the bombing of Hiroshima and Nagasaki should be considered war crimes, acts of state terror or a pragmatic way to end the Pacific War and spare human life.

How hard can it be to say “sorry”?

Obama's historic visit to Hiroshima occurred after a G7 meeting in Japan, and followed US Secretary of State John Kerry's visit to the city on April 11, as well US Ambassador to Japan Caroline Kennedy's equally unprecedented visit in 2015.

President Obama's visit to Hiroshima Peace Memorial Park included a wreath-laying ceremony, a short speech and an exchange with hibakusha, the survivors of the atomic bombing.

Cables leaked by Wikileaks in 2011 show that there has long been strong opposition by American officials to a visit by President Obama to Hiroshima. According to the Asahi Shimbun and other news outlets, US officials were extremely anxious that any exchanges between Obama and survivors of the atomic bombing not leave the impression that an apology of any kind was involved.

Instead, the meeting produced the iconic image of American President Obama hugging Mori Shigeaki, a survivor of the American bombing who went on to research and track down the fate of American prisoners of war who were in Hiroshima at the time of the Aug. 6, 1945, bombing and died as a result.

While there were no words of apology, this one act expresses the feelings everyone has (on this day).

Many Japanese newspapers reprinted the full text of Obama's speech in Hiroshima, which in part calls for the abolition of nuclear weapons:

But among the nations, like my own, that hold nuclear stockpiles, we must have the courage to escape the logic of fear and pursue a world without them. We may not realize this goal in my lifetime, but persistent effort can roll back the possibility of catastrophe.

Not everyone was satisfied with President Obama's visit. For example, atomic bomb victims in Nagasaki, which was also attacked in August 1945, said they wished the president would have visited their city too.

Although President Obama will shortly begin his visit to Hiroshima, people have been gathering since morning in a Peace Park in Nagasaki, the other city that was bombed in 1945. Those gathered in Nagasaki are calling for an end to nuclear weapons, and are praying to the victims of the atom bomb. One hibakusha says he wishes Obama would also have come to Nagasaki.

As well, surviving Korean hibakusha pressed for a formal apology from the United States, along with a visit to the A-Bomb cenotaph in South Korea.  Korea was a Japanese colony at the time of the bombing, and at least 70,000 to 100,000 Koreans were in Hiroshima and Nagasaki when the bombs fell.

President Obama only spent ten minutes in the Hiroshima Peace Memorial Museum… wasn't his visit a little bit short? What could he possibly have seen in so short a time?

However, Twitter user @satoss_kiki‘s reflections on the perceived shortness of Obama's visit inside the museum went viral.

Although the self-described “housewife from the sticks” (田舎のおばちゃん, inaka no obachan) has just 263 followers on Twitter, her rebuttal to the idea that Obama's visit to the museum was overly short was retweeted nearly 30,000 times:

While you may think that the President's ten-minute to the museum was meaningless, but keep in mind that Obama despite his busy schedule he managed to make time to go there. It wasn't “just ten minutes” to the President.