When Abe Met the Trumps 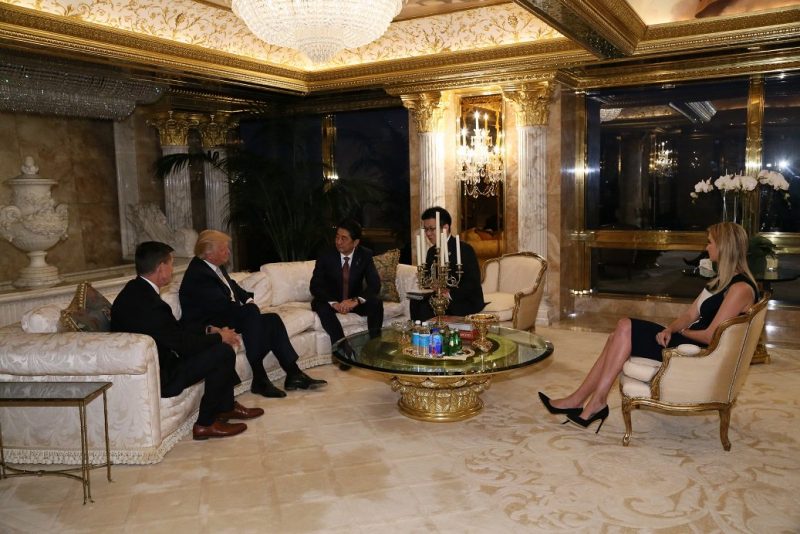 This photo of the November 17 meeting between Japanese Prime Minister Abe and US President-Elect Trump distributed by the Japanese Cabinet Relations Office has been widely shared on social media. Mike Flynn sits on the far left of the picture, Ivanka Trump on the far right.

On November 17, Japanese Prime Minister Shinzo Abe became the first world leader to meet US President-elect Donald Trump in person, at Trump Tower in New York. Various commentators noted that Abe's rush to meet with the President-elect was in part due to the need to address numerous complaints Trump had raised regarding Japan during the campaign. In Japan, commentators questioned the content of the discussion and exactly why Trump's family members were allowed to sit in on a meeting between two heads of state.

Initially, very little was known about the hastily arranged meeting between Abe and Trump. Following the ninety-minute meeting, news reports relied on photos and a statement by Abe provided by the Japanese Cabinet Office to glean what was said and who attended.

The American media is also reporting that Prime Minister Abe is President-elect Trump's first meeting with a foreign head of state. — Nikkei LIVE

I cannot answer questions about the specifics of the meeting. In any case, our alliance will not function without trust. I came away convinced that President-elect Trump is a leader who can be trusted.

The November 17 meeting occurred at Trump's private residence in Manhatten, and featured an assortment of characters, whose presence was viewed as controversial. Among these were Trump's daughter Ivanka and her husband Jared Kushner, and Mike Flynn, who served as the director of the Defense Intelligence Agency and who would be appointed as new US national security advisor in Trump's preliminary cabinet the day after the meeting. Critical for Japan to Have Good Relations With “Dangerous” Trump Administration

The meeting appeared cordial, and Prime Minister Abe reportedly gave Trump a made-in-Japan golf club worth $5,000. From Japan's perspective, it was imperative that the meeting be a success. Blogger, PhD candidate and Japan commentator Robert Fahey says a Trump administration is “dangerous” for Japan, and notes:

Donald Trump’s stated positions on foreign policy are a significant threat to that relationship. Trump’s statements throughout his campaign paint Japan not as a partner but as a global rival of the United States. He suspects Japan of currency manipulation to the detriment of the US […] [Trump] has also repeatedly railed against what he views as the United States being short-changed in its security arrangements with Japan, and has gone far beyond the US establishment – which has long pressured Japan to take a more proactive role in conflicts and peacekeeping efforts – by suggesting that Japan should arm itself with nuclear weapons to ensure its own security.

In the wake of Trump's Japan-bashing during the US election, commentator and former Japanese legislative aide Tobias Harris suggests Prime Minister Abe was also likely also trying to reassure Japan that the special relationship with the United States will continue:

It was not lost on some Japanese netizens that, based on body language, Abe seems to have a much better relationship with Trump than with Chinese President Xi Jingping:

Concerns In Japan About Abe's Rush to Meet Trump

Not everyone in Japan is reassured by Abe's meeting with Trump, however. Writing for Yahoo! Japan News, popular writer and activist Shiba Rei notes that, although Prime Minister Shinzo Abe was one of the first world leaders and other notables to contact Trump on November 9 following his victory, so was French far-right leader Marine La Pen:

Must read: Abe a world-class embarrassment after his meeting with Trump. ― Shiba Rei reports on Abe's completely different response to Trump compared to Germany's Angela Merkel.

Japanese opposition leader Renho Murata also blasted Abe, complaining that the details of what was discussed in the meeting were not disclosed. Sankei News reported that Renho demanded to know if strategic issues such as the Trans-Pacific Partnership and the future of American bases in Japan were included in the talks between Abe and Trump:

“I came away convinced that President-elect Trump is a leader who can be trusted.” (Abe and Trump meet)

Democratic Party (Japan) leader Renho asks, “On what basis do you trust Trump? You have an obligation to explain why.”

For other Japanese observers, perhaps the biggest question was why Ivanka Trump attended the meeting between Abe and Trump. Trump's daughter has no formal role in the US government, and is preparing to take over her father's business empire.

Why did Ivanka Trump sit-in on the Trump-Abe meeting? Her presence stood out.

The next day, the US press had one possible explanation:

How do Trumps cash in? Foreign delegations feel pressure to stay at Trump DC hotel, by @OConnellPostbiz @marycjordan https://t.co/po71qNkYDd