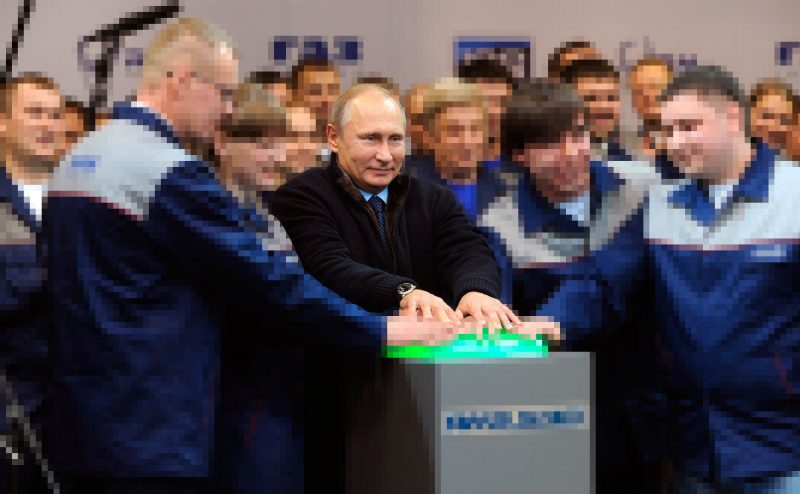 Google Trends has announced the top ten memes of the year in Russia. Some are borrowed from the American Internet, while others are entirely Russian and based on linguistic subtleties so small or obscure that explaining the logic robs the memes of all their appeal. In the spirit of 2016, however, RuNet Echo will risk ruining everything in an effort to make sense of these online trends.

Like many of the items on this year’s list, the origins of this meme predate 2016. Also like many of the most popular memes, this one recycles an amusing misspelling. Typos and grammatical errors have long mesmerized Internet communities, where native speakers’ sloppiness and newcomers’ incompetence makes for wonderful slapstick.

The misspelled phrase “moe uvozhenie” (a corruption of the Russian phrase “my respect”) allegedly first appeared in 2015 in a “stickers” collection on the Russian social network Vkontakte, where it was used as a caption on a picture of a man tipping his hat as a greeting.

In late 2015, the meme got a boost when Russian Internet users started sharing a video created using Zoobe.com, which allows users to match animations to short phrases. The video features Paddington Bear uttering the phrase “moe uvozhenie,” as he lifts his hat to say hello. As he does this, a snowball sails over his head, under his hat, narrowly missing him.

It’s a pointless, boring video, and people ate it up.

The meme has passed its heyday, but you can still find it used occasionally in photographs showing anyone removing or tipping their hat, or in circumstances when someone wishes to express their respect for someone sarcastically.

This meme, featuring a skeleton playing a flaming guitar in a cemetery, comes from the gamer community. The skeleton is a character from “Garry’s Mod,” a 2004 modified version of the classic game Half-Life 2. The guitar in his hands can also be found in the Steam Workshop, the account-based hosting service that makes it possible to play Garry’s Mod. For unclear reasons, the setting for the image is a scene from the 1998 Nintendo 64 game “Legend of Zelda: Ocarina of Time.” 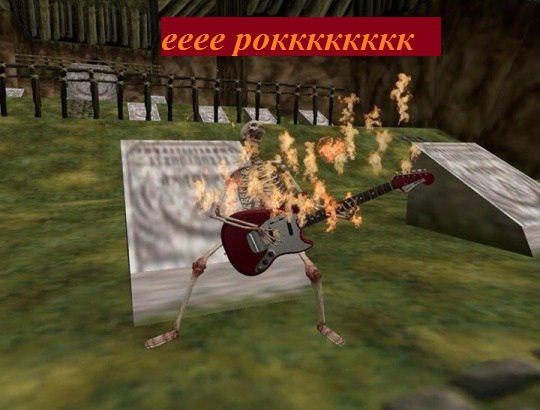 Hilariously, Internet users have even “geolocated” the image within the Zelda world.

The meme, which allegedly emerged in October 2015, is pretty self-explanatory: a skeleton is rocking out in a graveyard, on fire. Get fired up, people.

There’s some disagreement about the origins of this meme, which lie either in 2010 or 2015.

In May 2010, footage appeared on YouTube showing a man who called local paramedics to help his friend, “Lyosha,” who he said was trapped nearby. When a news team arrived on the scene, he brought them to an empty spot outside an apartment building, where he pointed at a wall, which he claimed was his trapped friend. Throughout the video, the reporter, apparently confused, keeps asking, “Where is he?”

Responding emergency workers then led away the clearly mentally ill man, offering to treat him to “analysis.”

But the more likely reason Russian Internet users asked Google about “Gde Lekha” in 2016 was the following video, shared on YouTube in October 2015 and filmed by a man watching his friend steer a small motor boat upstream, only to topple against the strong current.

The man’s narration, laced with obscenities, is strangely calm, despite witnessing an accident that may have killed his friend, for all he knows. “Where the fuck is Lyosha?” he asks at the end of the clip, as the capsized boat drifts downstream.

This meme is one of Google’s two top-ten RuNet trends that is both overtly political and traceable to Prime Minister Dmitry Medvedev, who continues to influence Russian online culture, despite the fact that his brief presidency is now little more than a distant memory.

In November 2016, Medvedev met with the prime ministers of Armenia, Belarus, Kazakhstan, and Kyrgyzstan, telling them that the phrase “Americano coffee” sounded “politically incorrect” to him, channeling the same chauvinism that led American lawmakers to rename French fries “freedom fries,” during the Bush years.

After Medvedev's remark, a diplomat in the Armenian delegation then joked that the drink should be called “Rusiano,” instead.

Never one to miss an advertising opportunity, Burger King immediately introduced Rusiano coffee at some of its restaurants in Russia, selling the drink for roughly a third the price it chargeed for Americanos.

If you thought the RuNet would be satisfied with just one skeleton-based meme, think again. This one is the product of “3D Movie Maker,” a computer-graphics software program that gifted the world classic memes like “Dancing Baby.”

Mr. Skeltal — or “Skull Trumpet,” as he’s known on the English-language Internet — gained popularity outside Russia in 2011 as a crude video meme, featuring the skull image blasting a trumpet cacophonously along to various songs.

In Russia, the meme is more popular as a still image or a GIF, which Internet users upload as a way to extend comments on imageboards (where new comments are needed to keep conversation threads active), or to provoke other users to add their own comments. People who write “thank you, Mr. Dudets” in comments are promised the gratitude of this ancient, musical skull.

This meme is likely familiar to readers who haven’t the foggiest idea about Russian Internet culture. An animated GIF series featuring Travolta’s character from the film “Pulp Fiction,” this meme isn’t even loosely Russian, though Russians embraced it hard in 2016, after it achieved superstar status in November 2015, thanks to the work of Imgur user “ILikeToWonkaMyWilly,” who used the GIF to describe his attitude when choosing “a doll” for his daughter’s Christmas present.

One of the most memorable Russian adaptations of the “Confused Travolta” meme came in February 2016, the day after demolition crews hired by the city of Moscow tore down hundreds of kiosks and small shopping centers all in a single night. Many of these small businesses sold “street meat,” like shawarma and other Middle Eastern dishes.

But the shawarma is gone, Johnny.

“Vaping,” or the use of electronic cigarettes, isn’t unique to Russia, though the term has gained popularity on the Russian Internet, where people like to talk about it, and talk about how awful it is. The seriousness with which many vaping enthusiasts approach the activity has led to a backlash online, where critics compare the use of e-cigarettes to hard drugs, religious cults, and various forms of degenerate behavior.

Like the “moe uvozhenie” meme, the humor here is based on misspoken, misspelled Russian. In this meme, the phrases “dratuti” and “dotvidaninya” are captions added to mirrored photos of a piece of wood. Like an image of Jesus Christ burned into toast, the knots in this wood resemble the face of a sweet but stupid looking dog — hence the misspelled “gweetings” and “guhbeye.”

The phrase allegedly originated in August 2016, but some bloggers have argued that the meme dates back to 2005, developing from an episode of the comedy TV show “Gorodok.” YouTube user Batya8k even tracked down TV footage showing the phrase “dratuti” in use on the show.

In May 2016, Prime Minister Dmitry Medvedev committed what is perhaps his most memorable gaffe, failing utterly to comfort a pensioner in Crimea who confronted him about weak social security in Russia. “There’s just no money right now,” Medvedev told the woman, before adding in a rush to leave, “you hang in there.”

The exchange even inspired a satirical song by the Russian comedian Semen Slepakov. You can listen to the song below and read a rhyming translation of his lyrics here.

In June, the media-monitoring company Medialogiya crowned Medvedev’s comments “the meme of the year,” noting that Russia’s mass media mentioned the phrase more than 4,400 times since May.

Already widely ridiculed in Russia as the feeble placeholder between Vladimir Putin’s presidencies, Dmitry Medvedev had a rough summer in 2016. The RBC news agency even reported that the prime minister’s adversaries intentionally drummed up the negative publicity surrounding his visit to Crimea. Ever since swapping roles with Putin in 2012, Medvedev has faced rumors that Kremlin insiders are scheming to steal his job. So far, gaffes aside, he’s managed to keep his job, and remain one of Russia’s most prominent national figures.

The biggest RuNet meme of the year ought to come with an apology. After breezing through nearly a dozen other inventive and bizarre Internet inventions, we’re left with the viral music hit “Patimeiker,” a dance song with lyrics inane as the rhythm is infectious. “Hey, DJ. Hey, beatmaker. Hey, street dancer. Hey, partymaker,” sings Vitalik Pika, the man behind the hit tune.

On YouTube, the song’s official music video has more than 13 million views. Before watching it, you should be warned that you might never get the beat out of your head. Not ever.