VIDEO: How Do Japanese Cats Stay Warm in Winter? With ‘Kotatsus’, Just Like Humans 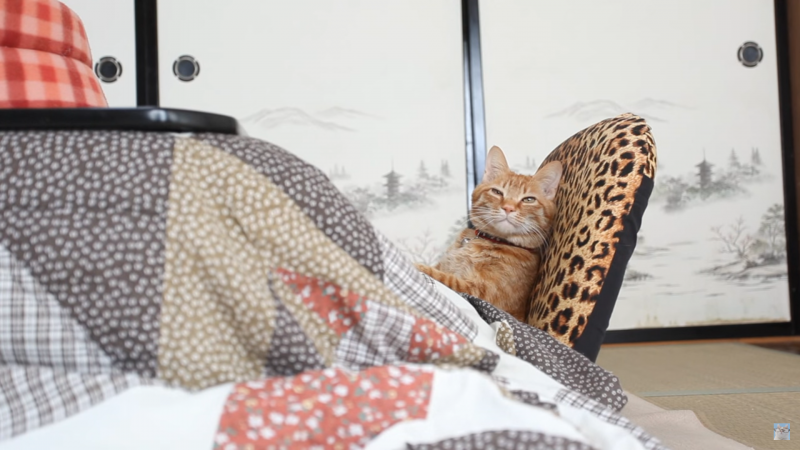 A cat in a ‘kotatsu.’ From the Kagoneko YouTube channel.

Winter has arrived in Japan. On Thursday, November 24, Tokyo experienced its first November snowfall in 54 years. While the snow may have been unexpected, it does herald the start of an uncomfortable season in Japan: winter.

While the torrid summer months can be made bearable thanks to ubiquitous air conditioning, Japan's chilly winter months can be cruel. This is because central heating is not as widespread in Japan as it is in other developed countries. Instead, many people rely on kerosene space heaters to keep warm, as well as something called a kotatsu—a low wooden table outfitted with a heavy blanket, and warmed by a heater underneath.

The word kotatsu conjures up images of coziness and warmth, and not just for humans. House cats love the kotatsu, too, and can often be found snoozing under the table, inside the blanket, close to the electric heater.

As reported by Japanese blog Fundo, YouTube vlog Kagoneko (かご猫 Ｂｌｏｇ, “Cat in a Box” Blog) captures this quintessential Japanese winter scene of warmth and comfort. The vlog regularly uploads videos of cats in Japan, including cats snuggling under kotatsus.

Cats also lay claim to the warm spot in front of the kerosene heater. The Nekobako blog captures this scene perfectly:

Be sure to check on the Nekokago vlog for regular updates.