Answering the Burning Question on Venezuelan Minds: To Stay or to Leave? 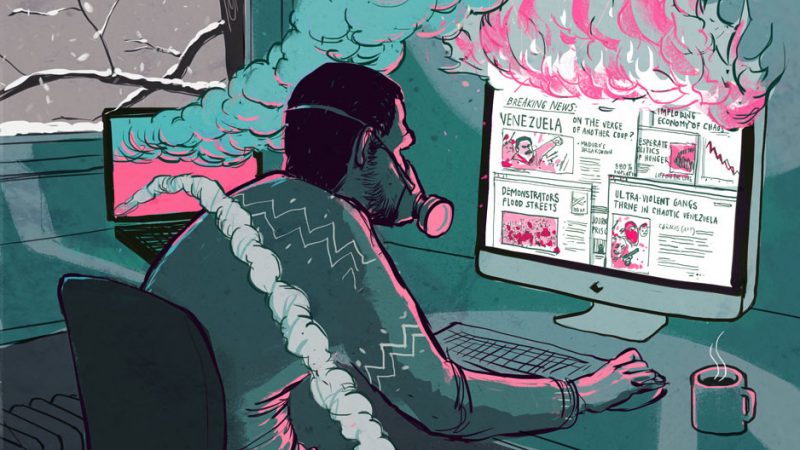 “Heartbroken doesn’t even begin to explain it. I live in Berlin, but my country's situation disrupts my little bubble of comfort here in the first world. ” Image made by Venezuelan graphic artist Leonardo González, used with permission.

Venezuela currently faces the highest rate of inflation in the world, along with chronic food and medicinal shortages. While the government and the opposition continue to blame each other for the dire state of the economy, Venezuelans living abroad have been reaching out to Venezuelans in the country, through social media, to say that there is a world outside their crisis-ridden country.

The crisis, which has occupied the portrayal of the country in international media, has worsened in the last few years and has, in turn, created spaces for alarming human rights violations, which echo both inside and outside the country.

In response, an increasing number of Venezuelans are considering whether they should stay in the country, or leave and seek opportunities outside. The independent online media Efecto Cocuyo published some of the statistics and the reasoning behind them, as explained by research experts in Venezuela:

Migration in Venezuela can be divided in three phases: The first was the migration of the elites, that left the country between 1999 and 2003 due to the political changes that were brought by the arrival of president Hugo Chavez […] The second, between 2004 and 2009 were qualified and educated people. Now, since 2010, it is the younger generations and the middle class the ones saying good-bye at the International airport in Maiquetía [due to] Venezuela's the political, social and economic conditions.

The voices of those who have left the country are quite visible in social media, and convey the different ways in which migrating has been challenging for Venezuelans. Community acceptance, cultural clashes, and the connection to the country's political crisis are very present in online conversations and testimonies, some of which have been shared by the collective blog Caracas Chronicles under #TheCrisisAndMe:

Juan Cristóbal Nagel, who writes from Chile, points at the ways in which the conflict in Venezuela hurts when putting in contrast with what seems to be an uneventful life in comparison:

My heart is full of lead, weighed down by an inability to put Venezuela behind me.

Every day, this scene repeats itself five, six times. Whether it is in a work meeting, a comment by a student in the hallway, or a call from a friend, people’s questions are always the same: “how horrible, what is going to happen?” The other day I started talking to a panhandler. He asked me where I was from. “Venezuela? Sheesh, things there are baaaad…” He gives me his pity look.

My reaction is the same. When I talk about it, it’s the half-an-hour of lingering emotional [hangover] that gets me.

I am grateful people are concerned, but I can’t help feel a bit jealous. They go on with their lives. They don’t feel guilty every time they go to the supermarket. They don’t have to spend hundreds of thousands of pesos buying medicine for loved ones to send home. They don’t spend hours and hours away from their family writing about Venezuela’s crisis.

We’re lucky. We’re not living through this crisis directly. But in a tiny way, we are.

In another post, Alejandro Machado recounts the way he feels his family keeps connected with online technology, although, to him, it's just not enough to feel them close:

We’re keeping informed, but not really in touch. We’re being entertained, but not really fulfilled. My family is now split across continents, leaving group chats and video calls as our only tools for maintaining our meaningful connection. I appreciate these feeble bridges that digital technology is tending, but, having lived the real deal, they don’t fully cut it.

We are away because the crisis became too dire, opportunities sprung up elsewhere, and we took them. We were extremely lucky to be born to this loving family and to not have been victims of the real tragedies happening to Venezuelans every day.

Alas, the crisis turned my family to a virtual one, and it hurts.

“Often times, we achieve something despite our nationality rather than because of it.”

There are many experiences charged with anger, but also with ideas questioning home and country, nation and identity. Hector reflects upon these in a post shared in Medium where he explains his reasons to leave the country and the anger triggered by the system and the political conflict:

I think we should discard the idea of being proud of the country we were born just for being born there, or being proud of the achievements of exceptional countrymen/women that shine around the world in different disciplines. Those achievements have taken place because they let go of that social and moral prison that is to be attached to a nationality and act according to it and its expectations. It's not a coincidence that great Venezuelan writers or thinkers charged their work with so much social criticism to national identity. Often times we achieve something despite our nationality rather than because of it.

Many others use social media, not only talk about the experiences and share stories of nostalgia but also advise others who might want to move abroad as well. For many, Venezuelans are experiencing what many communities in the 20th century had to go through in Latin America and Europe, and the shocks generate both empathy and criticism. As usual, the narratives are diverse, as it can be seen on the YouTube channel Diáspora Venezolana (Venezuelan Diaspora):

We always think our country is the best, our culture is the best, and what's true is that all cultures are beautiful. We're not from one place, we're from the world. People need to dare, to travel. I think life is about knowing, going places, meeting people, encountering cultures, see the world.