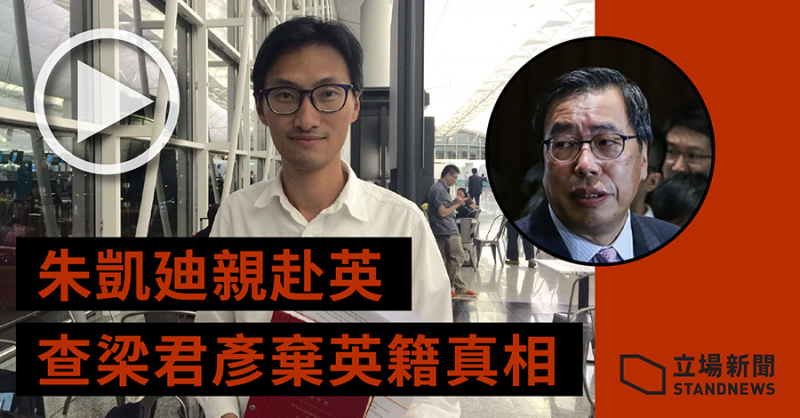 But it was a victory steeped in controversy because of Leung's British nationality, which he managed to renounce in a short amount of time, leading some opposition lawmakers to speculate that the UK government unfairly prioritized his case.

According to Hong Kong’s constitution, called the Basic Law, only 20% of the legislative councilors can hold foreign passports. The legislature is divided between seats directly elected by the people and seats elected by professional or special interest groups, called functional constituencies, and Legislative Council election law only grants 12 functional constituency seats the privilege to retain foreign nationality. All candidates who decide to contest a seat in the Legislative Council have to declare their nationalities, and those who are not in the 12 designated functional constituencies have to give up their foreign passports in order to run for the election.

He remained a British national until September 30 as indicated in a copy of the Application to renounce British citizenship, or Form RN, presented to the Legislative Council during the presidential election on October 12. According to the copy, the application date was September 22 and the declaration was signed and stamped by the UK's Home Office on September 30. 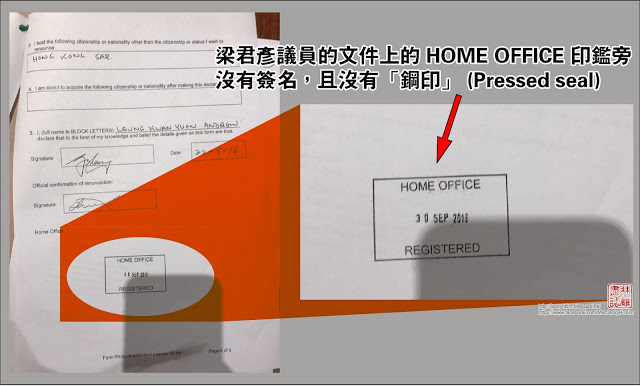 I have checked with a number of sources, and the processing time for Form RN generally takes 12-14 weeks. The fastest record is nearly six weeks, before the applicant received confirmation from the Home Office. How come Andrew Leung can finish everything in nine days (September 22 to September 30)?

According to requirements, the application form and the passport have to be sent to the Home Office together. Andrew Leung filled out his form on September 22. If he used express mail like DHL or FedEx, the set of documents could only be delivered to the Home Office around mid-day on the 23rd at the earliest. Then it had to go through internal mailing before it was delivered to the processing staff. But September 23 was a Friday, which means the staff could only handle the application on the morning of September 26 at the earliest…the processing of Form RN in four working days [in reality, it's five working days as the copy was stamped on September 30] is too incredible.

Putting aside the four days’ processing time issue. The Home Office should have had all the documents ready and shipped back to Hong Kong on September 30. […] Given that October 1 and 2 were a Saturday and Sunday, Andrew Leung should have received the package by October 3. The deadline for the nomination for Legislative Council president was on October 5, he should have been able to present the Form RN and save all the trouble. But he did not show the form? If he had the original on hand, why did he suddenly declare that he received a copied version of the Form RN?

The British Home Office is rather careful in handling nationality matters. Under what circumstances did the Home Office decide to provide special treatment to Andrew Leung and speed up the processing time to 10 times faster than usual?

When Andrew Leung submitted his Form RN, did he also attach an explanation? If the explanation was just that he had to “run for the Legislative Council presidency” I doubt if the Home Office would consider that justifying the privileged express processing procedure. If we assume that the Home Office really accepted the explanation, does that mean the British government was directly intervening into Hong Kong political affairs? The Chinese Communist Party keeps saying that foreign powers should not intervene into China’s domestic affairs, Andrew Leung’s act can be viewed as hooking up with a foreign power to intervene into Chinese internal business…

Since Andrew Leung has refused to answer questions about the process, newly elected lawmaker Chu Hoi Dick departed to London on October 16 to follow up on the matter. He pointed out in a press statement that if the British government had indeed given Leung special treatment under pressure from Beijing, that would be a violation of the “Hong Kong people ruling Hong Kong” principle in the Sino-British Joint Declaration between China and the UK, which handed control of former British colony Hong Kong back to China in 1997. That declaration stipulated that Hong Kong would retain its previous capitalist system and its way of life for the next 50 years:

We believe that the British Government, under the Conservative Party, experienced pressure from Beijing when processing Andrew Leung's application to renounce his British nationality given its extremely efficient and extraordinary administration procedures in order to make sure that he managed to renounce his nationality on time. This is a substantial intervention in the Legislative Council president election in Hong Kong and will affect the autonomy of the law-making body. Such an act has violated the promise of “Hong Kong people ruling Hong Kong” under the “Sino-British Joint Declaration”.

The question of his British nationality aside, the choice of Leung for Legislative Council president was controversial for other reasons. Leung's functional constituency only has 543 registered voters, whereas other pro-Beijing lawmakers have more of a popular mandate. Michael Tien Puk-sun and Paul Tse Wai-chun both were elected directly with tens of thousand votes from their districts and expressed interest in running for the legislative presidency, but Beijing’s representative in Hong Kong, the China Liaison Office, preferred Leung, who has the mainland government's blessing and has been a lawmaker representing the industrial sector since 2004.